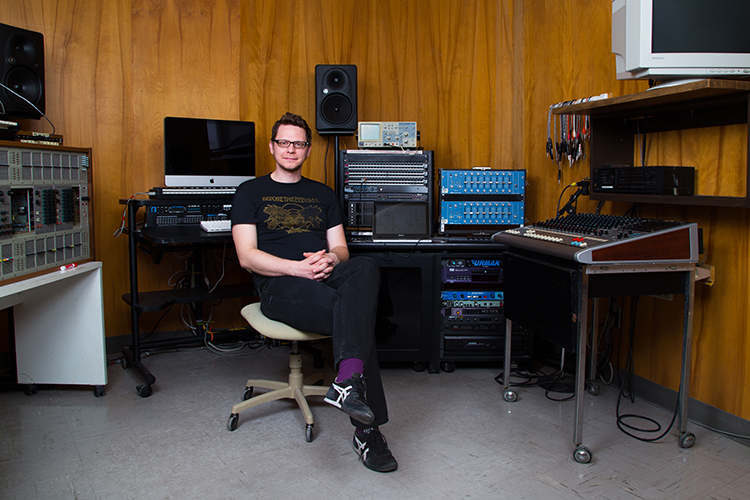 Nick Elert sits in the basement of the UWM music department surrounded by the computers and synthesizers he used to collaborate with a performer several states away. (Sandy Manikowski photo)

Natalie Moss started at the University of Wisconsin-Milwaukee studying computer science, but she found it didn’t really satisfy her artistic side. A switch to music composition gave her a chance to combine her love of technology with her interest in music.

Nicholas Elert liked performing rock music, but he found the work he was doing in the studio was what really interested him.

Both Moss and Elert are seniors in UWM’s music composition program, focusing on the intersections between technology and art. Both also had the opportunity this past summer to explore the field through major national and international workshops.

The type of composition they do relies less on pen and paper than on manipulating and reworking sounds using a computer and other technology. They collect the sounds from bits of other music, from free websites, from musicians they work with or just by taking a recorder out and gathering what they hear around them.

Moss spent a month at IRCAM in Paris, the French institute for studying the science of sound and avant garde electro-acoustic art music. As part of her experience there, she composed and performed a song in the “Arte Povera” style, the theme of this year’s program.  (Arte Povera, which means “poor art” in Italian, was created in Italy in the 1960s in reaction to the commercialization of pop music and art.)

Elert was accepted to the Summer Institute for Performance, Listening, Interpretation and Creation of Electroacoustic Music — SPLICE — at Western Michigan University. He received a UWM undergraduate travel grant to attend the institute, which is a weeklong intensive program for performers and composers that combines live performance and electronics. As part of the event, he collaborated long distance with Von Hansen, an adjunct professor of percussion at Friends University in Wichita, Kan., to compose a piece that was performed at the festival.

Moss is a vocalist, but her focus is on music composition, using a virtual synthesizer program to manipulate and create the sounds that she uses in her composition. Growing up in Cedarburg with a father who loves 1970s rock and roll, she became interested in how those synthesized sounds were created.

“There was all that mixing in those ’70s sounds. It really made me wonder: Why does that sound sound like it does?”

Elert’s approach is a little different. He writes music for instrumentalists that is augmented by sounds he creates on a computer. The performer’s music is fed into the computer, where it’s turned into strings of numbers and data that Elert can then manipulate. The computer composition can be programmed to respond to react to certain notes or series of notes from the performer in different electronic ways.

“This makes it easier for a performer to combine electronic sounds with the live performance,” Elert said. “It frees up the performer from thinking about the technical aspects of what they’re doing. They just play their instrument, and depending on how they play the instrument, the sounds just come out.”

The collaboration with Hanson this summer was challenging because the performer and the composer were in different cities, on different schedules and using different computer and electronic setups.

“We have a bunch of crusty old synthesizers in the basement. I love synthesizers, so I was making sounds with those, working in tandem with the drummer (Hanson),” Elert said.

Since Hanson wasn’t with him in person as they were preparing the performance, Elert taught himself to play drum to work out some of the initial computer bugs.

Both Moss and Elert came to UWM specifically because of the focus on composition and technology.

“It’s great to have a resource like this so close,” said Moss. “One of the greatest things about the music department at UWM is that the program is half focused on composition and half focused on technology, so I was able to marry my love of music with my affinity for technology and logical thinking.”

Elert toured and recorded with rock bands and earned a degree in guitar performance from MATC, but he liked studio work best. “I wanted to make the studio an instrument I could play somehow. So I started looking for a school that could foster that kind of thing, and that’s how I ended up here. I wanted to become good at this thing that I love doing.”

Moss plans to either go on for a graduate degree in the field or do an internship or work at a studio for on-the-job experience. Elert wants to combine composition with teaching and studio work.

Both see the field as offering them possibilities. While the music doesn’t attract many fans yet in the U.S., concerts in France sell out, said Moss.

“Electronic music is ubiquitous in our world today,” said Elert. “It’s not all beats and sampling Isley Brothers tunes. You can’t always dance to it, which limits the audience, but there’s tons of it out there.”