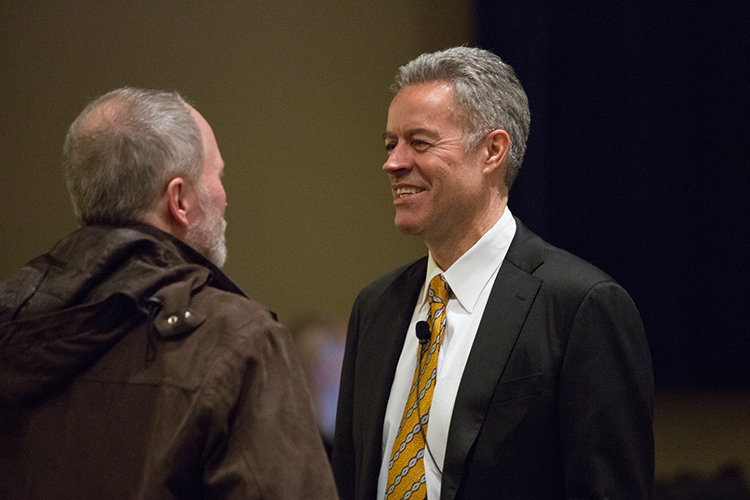 Chancellor Mark Mone laid out a path Thursday that he said will allow UWM to marshal its strengths and chart a course to not only survive but thrive.

“This is an effort to take charge, to define our future in a different way, where we will have a crisp, clear course for what we know are our priorities,” Mone told the crowd gathered at the Helene Zelazo Center for the Performing Arts for the spring plenary address.

Work is being done on several fronts, Mone said, including lobbying lawmakers, strengthening partnerships with the community and working with business leaders.

One such effort happened Jan. 11. UWM hosted a showcase with business executives – including representatives of Johnson Controls and A.O. Smith – and the leaders of the Wisconsin Legislature’s Joint Finance Committee, Sen. Alberta Darling and Rep. John Nygren.

Tim Sheehy, president of the Metropolitan Milwaukee Association of Commerce, made a strong case to the lawmakers for additional state support. Noting that metropolitan Milwaukee provides about a third of Wisconsin’s economic activity, he said state investment should reflect that.

“We’re asking for your eyes and attention on a proportional investment in the UW System and in particular UWM because it is going to have a good double bottom-line benefit for the community and the state,” Sheehy said.

Central to UWM’s success, Mone said, is its strength as a research university. He related an anecdote from 20 years ago, when an executive from Johnson Controls told him the company liked hiring UWM graduates, but looked to other universities for research capabilities. Now, UWM is a strong partner with Johnson Controls in research, attracting millions of dollars in investment and federal funding.

But investment isn’t the only reason for research, Mone said.

“R-1 is foundational to what enables this campus to teach so well, to engage in the community and to really be the place we want to be,” Mone said.

Also critical to UWM’s success is enhancing the climate and culture on campus, Mone said. A team of faculty members and staff from around the university has been studying the issue to find ways to improve diversity and inclusion.

The university will bring in speakers in March to talk about free speech, and about when free speech crosses the line into impermissible speech, Mone said. A campus forum will follow in May.

“We’re trying to be a campus role model for civility, for inclusion, for respect and welcoming of all ideas,” Mone said.

To increase student success, UWM is improving its student advising, Mone said. A new online portal will debut this spring to provide one-stop shopping for information about housing, financial aid, classes and other information. A physical location will follow later in the year.

UWM is on track to meet its goal of balancing its budget by 2020-’21, Mone said. Strategic position control has succeeded in aligning revenue with expenses. UWM has reduced expenditures by $40 million over the last year and a half, but likely continued enrollment declines will require another $15 million in spending to be cut by the end of this year, Mone said.

Regents in December approved a request for an additional $42.5 million in the biennial budget for operating expenses for the UW System, on top of the restoration of $50 million cut in the last state budget. The request also includes a freeze on tuition for the first year and an increase the second year.

Gov. Scott Walker has suggested he will require UW System schools to reduce tuition, though he said the universities and colleges would be made whole. Walker is scheduled to present his budget proposal Feb. 8.

Mone promised to fight for state resources and make the case for the importance of UWM in any venue available. He and other campus officials will continue meeting with legislative leaders. One meeting occurred recently with members of Walker’s staff.

Campus leaders will take their message on the road, too, including speaking engagements at Rotary Clubs and a speaking tour tied to the university’s 60th anniversary.

“We need to take charge of our message,” Mone said. “We need to continue stressing the value of all that we do, moving from defense to offense.”