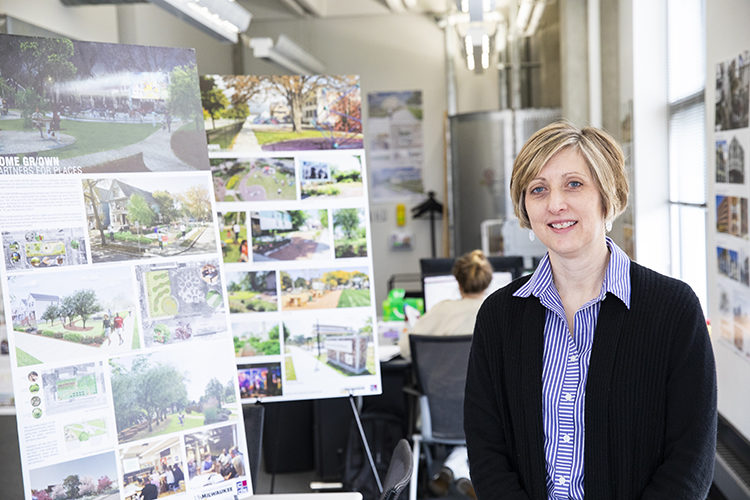 Community Design Solutions director Carolyn Esswein stands with some of the displays in the UWM Mobile Design Box’s exhibit “The Story of a Neighborhood.” (UWM Photo/Troye Fox)

UWM’s Mobile Design Box is wrapping up a three-year run at its latest stop with an exhibit that showcases the pop-up gallery’s partnership with community partners as well as promising signs of neighborhood revitalization.

“The Story of a Neighborhood” will be open Jan. 17-18 as the gallery run by the School of Architecture and Urban Planning winds down its tenure at the 27th Street location on the Near West Side in a building that once housed the Tower Theater. The exhibit, which features work by UWM’s Community Design Solutions, highlights the planning, process and design that goes into rehabilitating a neighborhood.

“We’re talking about big ideas – the past, present and future of development,” said Melissa Muller, Mobile Design Box’s community liaison and manager who is also the director of the Near West Side Partners Art Initiative.

‘Boots on the ground in the community’

Mobile Design Box is a community outreach initiative aimed at connecting the city and university through the gallery. The goal is to help revitalize vacant storefront space that would then lure new ideas, visitors and potential new businesses or investors.

“Mobile Design Box is our boots on the ground in the community,” said Mo Zell, chair of the architecture department. “We’re not just talking about community development. We’re proof that this development is happening.”

The gallery is leaving the space with restoration underway of the Tower Theater’s ornate lobby. Plans for what’s next for the space have not been announced.

Mobile Design Box held its first exhibit in 2015, having also occupied spaces in The North End development on Water Street and at the Historic Pritzlaff Building on Plankinton Avenue in the Third Ward before moving to 753 N. 27th Street in 2017.

About three dozen new businesses have opened in the seven neighborhoods that make up the Near West Side since 2015. The School of Architecture and Urban Planning’s Community Design Solutions center played an important role in the early stages of revitalization after creating designs for potential development of vacant properties, including the Tower Theater building.

Community Design Solutions director Carolyn Esswein, a professor of practice in urban planning, said that the new exhibit would help give residents a better idea of projects under way in the Near West Side since much of the redevelopment work is being done inside structures away from public view.

“Near West Side Partners reached out to us because they said that we really helped them start this conversation,” Esswein said. “We want to show the connection between the university, the revitalization process and the impact that it can have on this neighborhood.”

Zell said preliminary discussions have been held about a new location in the city for Mobile Design Box. Near West Side Partners Art Initiative also plans to continue to have a gallery presence in the area, and Muller credited Mobile Design Box for showing that such a space can be successful on the Near West Side.

Community Design Solutions is a design center in the School of Architecture and Urban Planning directed by Carolyn Esswein, a professor of practice in urban planning. It is staffed by students.

The Mobile Design Box exhibit will include displays of some of the initial plans by Community Design Solutions for Near West Side Partners, as well as other projects around the city in which Community Design Solutions has partnered with residents, municipal departments and nonprofit groups. One project featured in the exhibit is Ezekiel Gillespie Park, an award-winning, sustainable park featuring fruit trees and bushes that can be harvested by residents.

“The comment that I get from some of my students is ‘I probably wouldn’t be working in this neighborhood if it wasn’t for this opportunity,’” Esswein said. “To have a different perspective of working in some the more challenged neighborhoods has been a rewarding experience for them.”