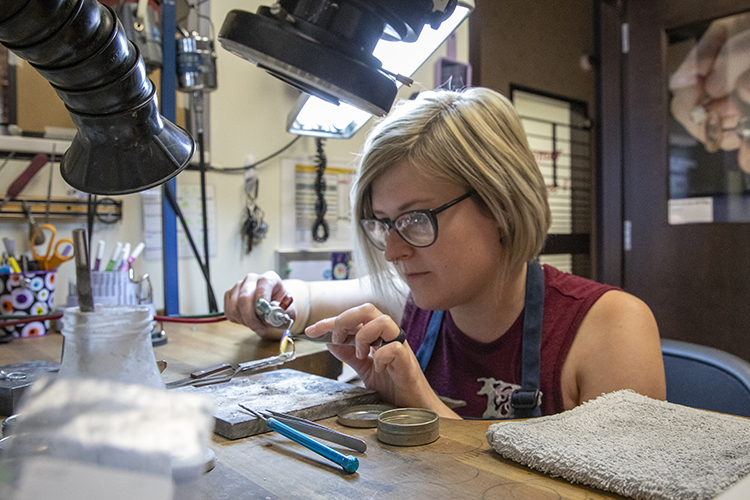 UWM alumna Cory O’Brien Borkowski is making her career in a field that offers golden opportunities.

Borkowski, who earned her BFA in art/jewelry & metalsmithing in 2017, is now a goldsmith at Kesslers Diamonds in Germantown as well as running her own online jewelry making business.

She first learned about the career when she was a student in the Peck School of the Arts. “I’d heard of ‘bench job’ (which is slang for an entry level jewelry making job), but I wasn’t really sure what that meant.”

Borkowski, who grew up on Milwaukee’s south side, started at UWM in 2008. “I’d always been interested in art, and my father was very supportive – he’s also an artist. It’s in the blood.” So, she took a few arts classes, including metalsmithing, along with her general college courses.

She had to leave school for awhile, but when she returned she wanted to pick up where she’d left off.

“The metals program had really stuck with me. It stayed in my mind the whole time I was off school.”

When she decided to return for her degree, she researched metalsmithing courses at several universities.

“That’s when I found out UWM was one of the best programs in the state. I then researched the professors, and they were the ones that really made me want to go back. I really enjoyed their work and admired them. I knew they could help my hone my craft.”

While the faculty were “awesome,” she said, the coursework was challenging.

“I was really bad at metals at first,” she added. “But I like a challenge, so I stayed in it until I got good.”

She was volunteering at a children’s workshop held by a UWM student arts organization, Object, when her career took another turn. As she was making keychains for the youngsters, a man approached her and asked about her interest in the field.

“This gentleman came up to me and asked if I liked making jewelry. I said, ‘That’s what I was getting my degree in,’ and he told me about being a goldsmith at Kesslers. I was curious and asked a lot of questions, and he encouraged me to apply.”

She ended up getting a part-time job at the Kesslers in Germantown while completing the last year and a half of her education.  Her employer was flexible, she said, so she could work her schedule around her classes.

Kesslers hired her full-time when she graduated.

“People bring in mom or grandma’s ring that they want to pass down to the next person getting married. If it’s a well-loved item, sometimes it can be turned into something else.”

More and more people are coming in looking to design their own jewelry and rings, she said. “That’s more popular now than ever. People that want something bespoke, made for themselves.”

While she doesn’t do that at Kesslers yet, she does design jewelry for herself and others, available on her website. She is also a visual artist, with work displayed recently in the Art of Water III juried exhibition at the James May North Gallery in Algoma. She also received an honorable mention in the Coast to Coast Marin Society of Artists juried exhibition in San Rafael, Calif.

As a UWM alum, she’s been able to build some connections between her employer and the jewelry and metalsmithing program at UWM.

When the firm was planning to get rid of some casting equipment it was no longer using, Borkowski suggested that the company donate the items to UWM’s program.

Then, in fall of 2018, Borkowski helped establish the firm as a community partner of the UWM jewelry metalsmithing program. In addition to donating the casting equipment, Kesslers donated money toward program development and set up a new internship program.

Borkowski, with the support of Richard Kessler and Keith Morrow of Kesslers, worked in collaboration with Professor Yevgeniya Kaganovich, who heads UWM’s jewelry and metalsmithing program, and Erica Meier, who was teaching a construction and fabrication course to organize a contest and exhibition of UWM student work. Top students won prizes and scholarships.

In addition to Borkowski, Kesslers now employs five other UWM grads, most from the arts program. The partnership gives the firm the opportunity to get to know students who want to get into the field, said Borkowski. As she found, there are opportunities in a field that is still a craft.

“Being a goldsmith is a very obscure job,” she said. “Not a lot of people know about it, especially young people. For every 10 goldsmiths that are retiring, there’s only one replacing them.”