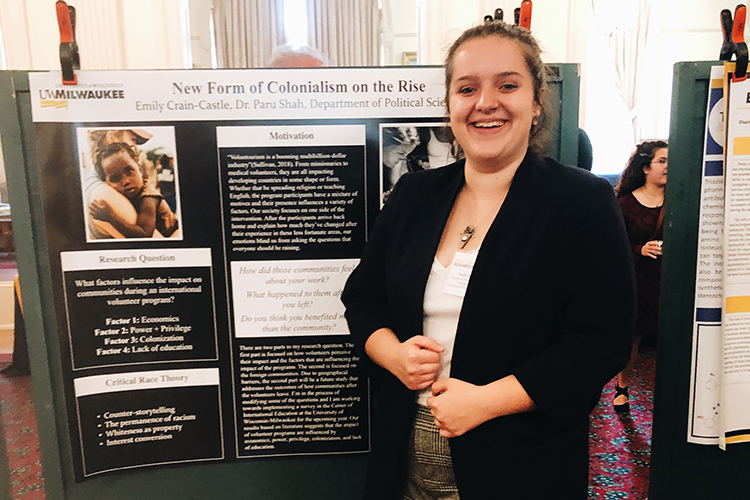 Emily Crain-Castle has been studying the effects of the volunteer industry in developing nations.

Volunteers travel with the best of intentions, but that doesn’t prevent the worst of consequences.

That’s according to research by Emily Crain-Castle, an international studies major and a McNair scholar at UWM. She spent the summer conducting research that examines the impact of the volunteer industry on developing nations. While her work is still ongoing, she’s uncovered some chilling facts: When young people go abroad to volunteer, they’re often harming more than they’re helping.

“My research question was, what factors influence the impact on communities during an international volunteer program? I looked into medical volunteering, missionaries, people that are going on spring break,” Crain-Castle said. “Volunteer tourism is a multibillion-dollar industry. People are making tons of money on this, but I’ve found not many individuals in the U.S. are looking at this in academia.”

As a McNair scholar, Crain-Castle conducted her research over the summer under the guidance of Paru Shah, an associate professor of political science. UWM’s Ronald E. McNair Post-Baccalaureate Achievement program prepare undergraduate students for doctoral studies. McNair participants are either first-generation college students with financial need, or members of a group that is traditionally underrepresented in graduate education, and have shown strong academic potential.

Crain-Castle found that every year, thousands of people from developed nations travel to lend their time and talents at places like medical clinics, orphanages, and schools in developing nations – places such as Africa, South America and southeast Asia. While they often travel with the desire to make a positive impact on the world, she says that their efforts can many times harm the area where they volunteer.

Her research over the summer identified four key areas of negative impact:

“For instance, we as westerners bring things like donated shoes or clothing into these countries, but they actually take away from the (local) economy. People won’t buy clothes or shoes locally and support business owners,” Crain-Castle said.

Or, she said, people volunteering to do work for free may displace local workers who would have been hired to perform the job instead.

Training for volunteers varies wildly depending on which organization they travel through. Many times, volunteers will lack cultural understanding about the area they’re visiting.

“We believe different things and we go about things differently,” Crain-Castle said. “Going with that mindset into a community and not having that education, we could end up doing things the wrong way.”

Worse yet, some volunteers aren’t qualified in the areas where they’re trying to serve – as medical practitioners or counselors, for example. Crain-Castle points to the story of Renee Bach, who founded a medical clinic in Uganda and was later accused of performing clinical procedures on children, despite the fact that she is not a doctor.

Crain-Castle worries that volunteer tourism sets up underdeveloped nations to be dependent on other countries’ goodwill. She calls it a new kind of colonization, less violent but still reminiscent of the way global empires exploited their colonies for resources.

Race and ethnicity are undeniable factors at play when it comes to the volunteer industry. Most volunteer abroad opportunities are in countries where the majority of citizens are non-white.

“If you look up volunteer (opportunities), you’ll always see a white person at the center of it. It’s a marketing strategy,” Crain-Castle said. She worries that these messages perpetuate racial stereotypes.

These are only preliminary findings. Crain-Castle’s research was hampered because little work has been done in this area. There are no formal numbers and no statistics. She’s had to rely on narratives and interviews from locals who have interacted with volunteers.

This semester, “I hope to create a survey and use it here, in some form, or work with a nonprofit organization that is doing this work. Data would be collected and we’d go to host communities and ask, how do you feel about this work being done? Do you like it? Is it benefitting you?” Crain-Castle said. “I can’t really do that since I’m here and have a lot of barriers, geographically.”

She’s also corresponding with Benjamin Lough, an associate professor of social work at the University of Illinois at Urbana-Champaign. He’s conducting a 15-country study to determine the impact of local volunteering on community resiliency, and Crain-Castle hopes to study his data to inform her own research.
Before anyone gets the wrong idea, Crain-Castle recognizes that many of the countries working with volunteers do need help to do things like create accessible medical care or build infrastructure. Just, she asks, be aware of volunteering’s impact.

“Educate yourself on the country, the people, their history. I think people need to step back and realize that you’re just an individual within in a larger context,” she said. “Don’t have a big ego going into it.”