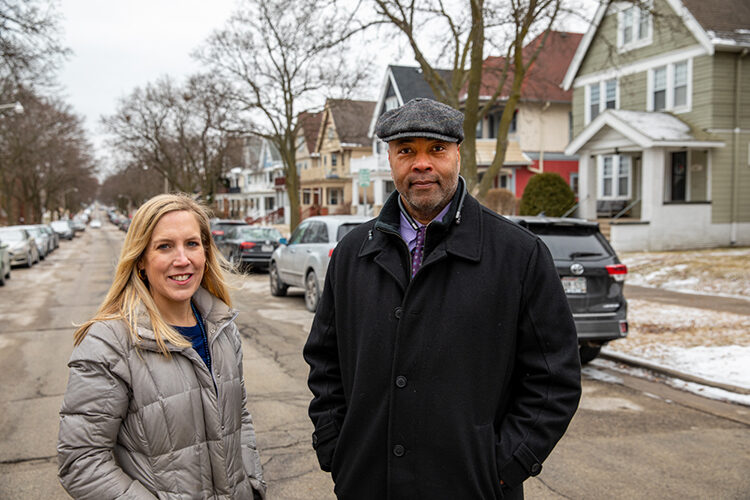 Anne Bonds and Derek Handley are working on a project, “Mapping Racism and Resistance in Milwaukee County,” that will produce a map for Milwaukee County that will show both the location of past deed covenants and the stories of resistance to restrictive housing so people could easier see the effects of covenants today. (UWM Photo/Troye Fox)

For half of the 20th century, Black people in Milwaukee and other U.S. cities were not legally allowed to live where they wanted to. A list of policies and institutional processes were in place to keep Black and white neighborhoods separate.

And one of the lesser-known means to that end were covenants. Clauses in a property’s deed, covenants were conditions of sale that stipulated that only members of the white race could purchase, own or live on that piece of real estate.

Covenants were commonplace by the turn of the 20th century. And, although their use declined in the 1950s when they were no longer enforceable, covenants have relevance today. To understand today’s segregation, where it happened in the past and how people responded are vital parts of the story that are often unknown.

On this episode of Curious Campus, researchers Anne Bonds, associate professor of geography at UWM, and Derek Handley, assistant professor of English, discuss their research project, “Mapping Racism and Resistance in Milwaukee County.” Here’s a bit of what you’ll hear on the full episode.

Give us a little more information about covenants and how this project began.

Bonds: Covenants began appearing after a Supreme Court ruling in 1917 struck down what’s called racial zoning – where a city would actually designate a certain area to be the only area where the African American community could live. And so covenants emerged as a mechanism to continue white control of where non-whites could live.

By 1928, roughly half of all homes owned by white Americans had race-restrictive covenants attached to their deeds, including many suburban areas of Milwaukee – Wauwatosa, Shorewood, West Allis and Greenfield, to name a few.

Derek and I had the idea to produce a map for Milwaukee County that would depict both the location of past covenants and the stories of resistance to restrictive housing so people could easier see the effects of covenants today.

The hope is that seeing them documented on a map can educate people and help ease the public conversation about segregation.

What is the point of studying covenants today? They no longer exist, right?

Bonds: Right. But what the covenants show is that segregation during the 1910-1960 period wasn’t accidental. It was by conscious design, and it was something that was not only legal, but required the backing and participation of multiple kinds of institutions and agencies – from realtors and developers to banks.

This kind of institutionalized racism is invisible – a lot of white people today don’t know it ever existed. So, covenants help us understand the way institutional racism works.

Handley: Segregation wasn’t just in the South. That’s why Minneapolis and Milwaukee are consistently ranked among the top five worst U.S. cities for Black people.

And then there’s this issue of passing down intergenerational wealth. For the average American, owning a home is one of the main ways to accrue wealth or pass it on to the next generation.

Today in Milwaukee, that inequality in homeownership between whites and Blacks is also among the largest in the country. Only 26% of Blacks own their homes, while 72% of whites do.

What are some of the stories you’ve uncovered while working on “Mapping Racism”?

Bonds: The story has always been told that Milwaukee never had racial zoning. But what we found through going through the Milwaukee Board of Realtors scrapbooks is that, in fact, that board was proposing an effort in 1924 to designate an area that they were calling a “Black Belt.” That would have been against the law. It sparked incredible protest and members of the African Black Episcopal churches were organizing with the NAACP. In the end, the Board of Realtors backed off.

Handley: Specific community organizations formed in cities, not only to teach citizens how to organize, but also to teach them how to speak at public hearings or talk to landlords. That happened in Milwaukee, where the Walnut Avenue Improvement Committee Organization formed to rehab houses to address blight.

We also saw the establishment of the Black-owned Columbia Savings and Loan in Milwaukee. Because of racism, Black people could not get a loan to buy a home. So Black people created something for themselves. So, to me, that’s resistance!

Derek, tell us more about your research into African American rhetoric in protests.

Handley: The term “rhetoric” is often associated with speeches. But in this case, rhetoric refers to the arguments used to form the basis of community activism. Think of rhetoric as this broad umbrella: It can be argumentation theory. It can be writing that people used. It could be visuals.

My research deals with rhetorical strategies of civil rights and segregation protests – the arguments that drove African American resistance in the urban North. I’m currently finishing a book that examines urban renewal policies that came out in 1950s but played out differently in each of three northern cities – Pittsburgh, Milwaukee and St. Paul. So, I’m looking at rhetorical strategies in response to the demolition that occurred during the urban renewal period and also in the northern civil rights struggles over housing.