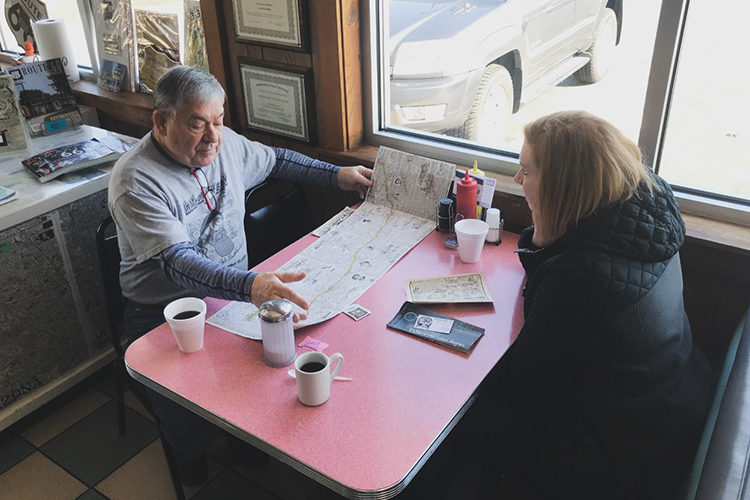 Emily Topczewski conducts an interview with Buz Wildmire for We the Voters in Springfield, Illinois, in February 2020. (Photo courtesy of Emily Topczewski)

In Portland, Maine, Emily Topczewski met a lobsterman in a bar and talked her way into spending a day on his boat. In a small town in Georgia, she convinced a police chief to let her ride along with one of his officers following a Black Lives Matter protest. In Ohio, she mourned with the community after she witnessed an opioid overdose.

She recorded it all – the good, the bad, the personal, the political. It’s part of her “We the Voters Project,” an ambitious endeavor to help Americans bridge some bitter political and social divides.

“The idea of We the Voters is that this is an interview project where I’m conducting interviews in small towns and large cities across all 50 states, talking to people on the premise that most people are good, and that if we are willing to listen to each other and listen to each other’s stories, it’s a lot harder to draw those lines and boundaries,” Topczewski said.

Since she began her cross-country trip a year ago, Topczewski has interviewed hundreds of people in 26 states. Currently, she’s taking a break in Georgia where she’s reviewing her material and riding out the COVID-19 pandemic. Every day, she posts snippets of interviews to social media and YouTube, updates the We the Voters Project website and her blog, and gives glimpses into the lives of ordinary Americans from every walk of life.

Topczewski never wanted to be anything but a journalist.

“I used to make these family newspapers on Microsoft Publisher – I have a very large Catholic family – about all of the news happening with my cousins and aunts and uncles, and then I would distribute them at family parties. And I did that for years,” she said with a laugh.

Topczewski grew up in Brookfield, Wisconsin, and initially attended college at a smaller school before transferring to UWM in search of a bigger journalism market. UWM’s Journalism, Advertising, and Media Studies Department had everything she was looking for: talented professors, internship opportunities and, at the time, a news program called PantherVision that taught students how to create their own media broadcasts.

After graduation, Topczewski worked at WTMJ radio before trying her hand at public relations as an intern in the D.C. office of a Wisconsin congressman. Deciding government was not for her, she found a job at PR firm and later transferred to that firm’s Chicago office. But something was missing.

“I kept going back to what I loved about journalism when I was at UWM and what I loved when I interned in a newsroom,” Topczewski said.

“At that point, I was single and I didn’t have a house and I don’t have any kids. I said, what is really keeping me from being on the road? The only thing was my lease, which was ending. I took a leap of faith.”

And thus was We The Voters Project born.

In each state she visits, Topczewski spends a few days exploring three areas: The state’s largest city, a midsize town and a small town of fewer than 15,000 people. She typically looks for local movers and shakers to interview: small-business owners, the leaders of charitable organizations or nonprofits, etc.

“I start there because those are people who are really ingrained in their community. If they’re not comfortable being interviewed, they can typically point me to someone who would be or who knows something or who has been here for 50 years,” Topczewski said. “Those are typically the people who can give me a better sense of what it’s like to live somewhere.”

She also stops people on the street – and in bars, churches, parks, diners and town hall meetings – and asks to talk to them. Eventually, she has people telling her their life stories and their politics.

“I’m interested in what makes people tick. My premise in this project is that most people are good and that we are more alike than different,” she said. “You start to pull back the layers and start to get to what people are concerned about, which are typically very similar things.”

Jim in Lexington, Kentucky, spoke about his pride and worry for his son, a firefighter/paramedic. Ron in Detroit talked about growing up poor and how the gang activity has waxed and waned. Lynn in Glidden, Wisconsin, talked about her town’s struggle to survive. Scotty, the lobsterman from Maine, talked about the pollution in the ocean that he sees every day from his boat.

Topczewski has some big plans for We the Voters. She’s launching a podcast in the fall and she plans to write a book about her experiences. Also in the works is a documentary series of short videos that share some of the major themes Topczewski has encountered. The documentaries should debut in winter of 2021.

The coronavirus pandemic threw a wrench into her plans. Topczewski is debating whether it’s safe to travel and continue her work, or if she should redefine the project’s scope. Either way, she hopes that it will inspire others to think about their neighbors across the country.

“My interest is the theory that if you could look in the face of someone, who may look like you or not look like you at all, hear their voice, hear why they believe what they believe, then ideally, hopefully, you’ll be able to grant another person, a stranger, the same empathy that you reserve for your own friends and family.”