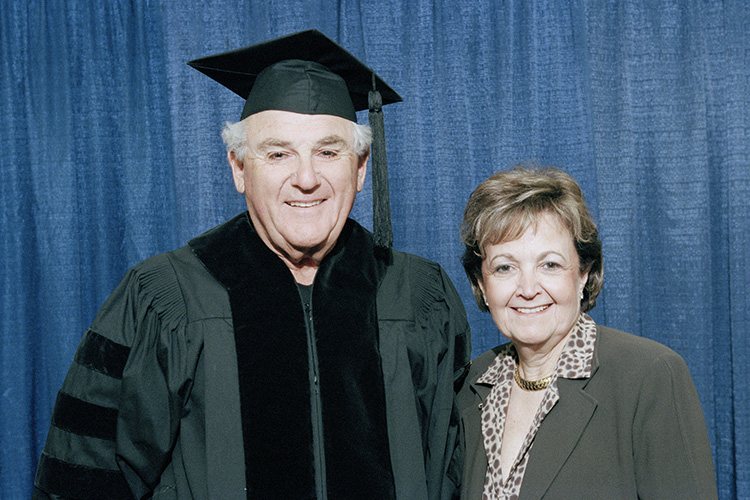 Play Video
Bernard Peck, a longtime supporter of the arts and UWM, died Oct. 15. Peck received an honorary doctorate in fine arts from UWM in May 2001. He is shown in this picture wtih his wife, Miriam Peck.

Bernard Peck, who played a major role in the purchase of the Helene Zelazo Center for the Performing Arts for UWM and whose family long supported the arts here, died Oct. 15 at age 88, in Fort Lauderdale, Florida. A memorial service for him will be held at UWM today.

Known as “Bernie” to his family and to friends at UWM, Peck and his family’s foundation were instrumental in the university’s purchase of the Temple Emanu-El B’ne Jeshurun building, which became the Helene Zelazo Center for the Performing Arts in 2000. In 1999, UWM’s School of the Arts was renamed the Peck School of the Arts, for his parents, Milton and Lillian Peck.

The service begins at 12 p.m. at the Helene Zelazo Center for the Performing Arts, 2419 E. Kenwood.

“When I think of Bernie Peck I think of a man who made the most of himself and our entire community,” said UWM Chancellor Mark Mone. “His level of caring and impact at UWM and in the region are without measure. Bernie and his family have had a profound impact. He will be dearly missed.”

A businessman and philanthropist, Peck attended UWM before going into the family business, Peck Meat Packing Corporation. In 2001, the university recognized his numerous contributions in the Milwaukee area with an honorary doctor of fine arts degree.

“The Peck family, through the generosity of Bernie and Micki Peck, made possible a new level of artistic achievement for generations of arts students at UWM,” said Diane Grace, director, major and planned giving for the UWM Office of Development. “We will be forever grateful for their vision.”

In addition to running a successful business for more than 40 years, Peck was one of Milwaukee’s leading philanthropists. Through the Peck Foundation, Bernie Peck and his family contributed to the Peck Welcome Center at the Milwaukee County Zoo, the Peck Pavilion at the Marcus Center, the Peck Aquatic Center at the Jewish Community Center, and the Peck Chapel at Congregation Emanu-El B’ne Jeshurun.

Bernie Peck also served on numerous community and charitable boards in Milwaukee and in Broward County, Florida, including the Milwaukee Ballet, the Zoological Society of Wisconsin, Alverno College, the Karl Jewish Community Campus and the Boys & Girls Club of Greater Milwaukee.

He had a particular interest in the arts because of the encouragement of his mother, he told an interviewer. (See video).

Peck did much of his good work behind the scenes, Sister Joel Read, former president of Alverno College, told the Milwaukee Business Journal in a 1999 profile.

“I am a great fan of Bernie Peck,” she said. “He always makes you feel better when you’re around him. He’s very upbeat. He keeps a light heart.”

As evidence of that light heart, he enjoyed collecting and restoring antique cars and was a fan of circuses, particularly clowns. He was president of the International Clown Hall of Fame,

Marcia Parsons, professor of dance, met the Peck family through their involvement with the Peck School of the Arts and efforts to buy the former temple for a UWM arts performance space.

“They have all been very generous and involved with UWM and the arts, and just such darn nice people,” Parsons said.