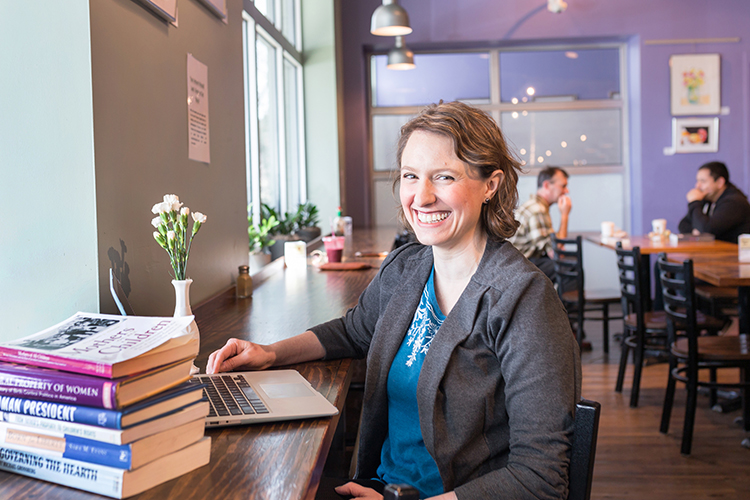 Mother’s Day may seem like just another holiday, a day for flowers, gifts and a phone call. But it has a history that is as complex as the ever-changing concept of motherhood itself, says Leslie Harris, UWM associate professor of communication.

“Today, Mother’s Day is a celebration at large about women and mothers that often involves gift-giving and going out to brunch,” Harris said, “but there have been a lot of beginnings of Mother’s Day in American history, and none of them really have a lot to do with gifts.”

Harris began researching motherhood 15 years ago. With three degrees in communication studies from Northwestern University, Harris developed an early and enduring interest in how American women across history have carefully crafted and shared messages and motivation to effect change in public life.

“Across U.S. history, motherhood is a repeated trope that’s used for public change, whether the issue on the table was ending slavery, banning the sale of alcohol or enacting laws so that women had the right vote.”

The mother of Mother’s Day

Anna Jarvis, known as the mother of Mother’s Day, came of age amid this tumult. She was born in 1864, one year after President Abraham Lincoln signed the Emancipation Proclamation. By the time she was 10, the Women’s Christian Temperance Union was erecting public water fountains to provide thirsty men with an alternative to saloons for refreshment. Jarvis watched her own mother, Ann Marie Jarvis, bring together the mothers of Confederate and Union dead after the Civil War to establish common ground among those who had endured incredible loss.

The death of Anna Jarvis’ mother in 1905 inspired her to create a celebration that would acknowledge the sacrifices that Ann Marie Jarvis had made to parent 11 children and maintain a devout Christian home.

“Jarvis saw her mother as somebody who could never fulfill her potential or desires because she sacrificed for her family,” Harris said. “She saw Mother’s Day as a day to honor her mother’s sacrifices in a forum a lot like other special Sundays at church, like consecration Sunday, and that would be symbolized by a white carnation.”

The first two years of Jarvis’ Mother’s Day campaign were modestly successful. There was a tribute to Ann Marie Jarvis at her daughter’s church, followed by a citywide celebration in Philadelphia in 1907. The movement gained national support through a letter writing campaign to legislators and support from florists and other merchants.

A daughter’s hard work paid off in 1910 when West Virginia legislators passed a law declaring that the second Sunday of May would be officially recognized as Mother’s Day. Other states quickly adopted the holiday.

“As the holiday became nationally accepted, florists and other industries became invested in that as an opportunity to market flowers and other gifts. The florists were the most guilty of this, and Jarvis felt she had been taken advantage of.”

In fact, Jarvis spent her final years as an activist trying to undo her own success. “She was upset that what she envisioned as a primarily religious remembrance to honor the sacrifices that mothers made became a day for buying stuff, and she pushed back very hard against those tendencies toward the end of her life,” says Harris.

As a parent, Harris enjoys Mother’s Day as much as the next person, though she asks her two children to clean the kitchen instead of buying her gifts. “I’m asking them to reduce the amount of labor that I do,” she said, laughing.

As a rhetorician, however, Harris advocates for a more inclusive understanding of the holiday that honors those who want to celebrate and be celebrated, while recognizing the range of emotions and identities associated with Mother’s Day.

Walking into a restaurant and saying “Happy Mother’s Day” to every woman you see may be well intentioned, but it also reinforces the idea that all women are innately maternal and want to be recognized as mothers first and foremost, Harrissaid.

“I would be sensitive to recognizing that not all women have access to motherhood and some women are not able to be with their kids on Mother’s Day,” Harris said, “and some kids don’t have mothers. It’s complex, and that’s why it’s important to be cognizant that the stereotype of motherhood isn’t the same for everybody.”