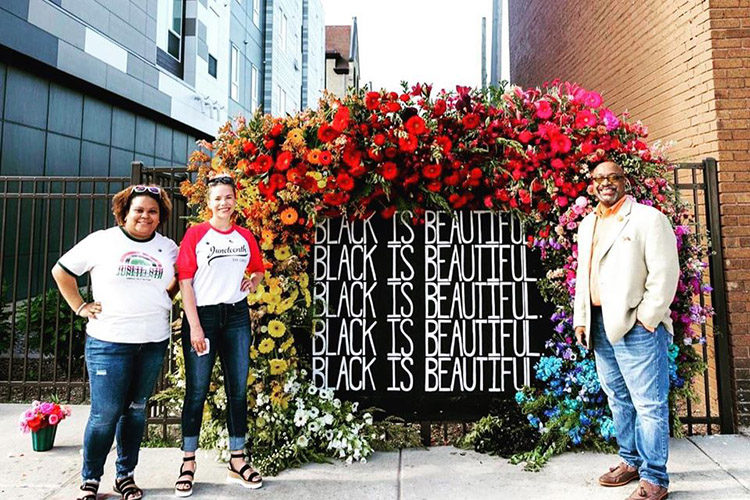 It’s a unique moment in history, and America’s Black Holocaust Museum is poised at its crossroads.

For the past 12 years, ever since the organization lost its building in the 2008 Recession, America’s Black Holocaust Museum has been a strictly virtual museum. That made it perfectly positioned to weather the coronavirus pandemic that has limited crowds and affected other museums around Milwaukee.

And, as protests have swept the nation in the aftermath of the death of George Floyd in Minneapolis and Breonna Taylor in Louisville at the hands of police, America’s Black Holocaust Museum saw its mission become more critical than ever.

UWM alumna Mia Phifer is helping the museum navigate it all. A 2018 graduate of UWM’s public history program with certificates in museum studies and nonprofit management, Phifer serves as the executive assistant to the museum’s president/CEO. She sat down recently to talk about her work.

What is America’s Black Holocaust Museum?

It all started with a man named Dr. James Cameron. When he was 16 years old, he survived a lynching attempt in August of 1930.

Afterward, he became a well-known civil rights activist, educator and self-trained historian. He came to Milwaukee and created this museum as a place for Milwaukeeans and people across the country to visit and get that unvarnished truth of our country’s racial history in order to promote racial reconciliation and forge a better nation.

Unfortunately, the museum’s physical location did not survive the Great Recession of 2008. A group of people took what was in the physical museum, all of that content, and put it all online to create a virtual museum in 2012 to make sure it survived. We are currently re-opening the museum in the exact same location where it used to be on North and Vel Phillips (avenues).

Dr. Cameron founded the museum after he had visited Jerusalem and the Holocaust museum there. He saw a lot of parallels between how African Americans are treated here in this country and how Jews were treated in the days leading to the Jewish Holocaust. He found that term fit what happened during slavery and Jim Crow, revealing the truth behind (history) that has been whitewashed over.

How did you come to your current role?

I really like bringing history outside of the classroom and producing a more honest, unvarnished history than what you normally get, especially in a high school classroom. Museums are one space to do that.

As an undergraduate at Coe College in Iowa, I began picking internships at museums. When I found out about UWM’s public history program, it was a no-brainer. During graduate school, (a UWM professor) introduced me to America’s Black Holocaust Museum. Every time I had the opportunity to use their history as part of my projects in my classes, I did. For a nonprofit management course studying nonprofit finances, I picked the museum to study. For an exhibit review of a museum, I picked their website.

When the posting for an assistant to the president/CEO went up, I had literally 10 different people send it to me. I went into the interview for that job specifically, and they ended up creating a whole different position for me to utilize those skills that UWM equipped me with. They found me work more on the nonprofit management side and on the museum studies and public history side.

Since then, I got a promotion in March and I am doing some of that executive assistant work for our new president and CEO, Dr. Robert Davis. He’s very conscious of the fact that I’m a public historian, and he’s always having me help with different research projects that allow me to use my background that I got at UWM.

What does a typical day look like for you?

People with a museum studies background will recognize the phrase, ‘Around a museum, you wear many hats.’ That’s what’s always attracted me to a smaller, more grassroots museum. Even though I have a formal title, (my job) is very organic and team-oriented, especially with our team being so small. There are only four of us who are part of the core staff.

I handle Dr. Davis’ schedule. I do some administrative stuff and field emails so we can get different community partners on board. I also help with grant writing, but my favorite part of my job is when I get to use my historical training and do different research projects for programs.

What kinds of exhibits are in the virtual museum?

One of the cooler pieces is a remnant of a slave ship, and also an auction block. Seeing the physical structures of this very harsh experience can be very striking and moving.

People will see those in person when the museum reopens, but for now, you’re still virtual. It seems like ABHM was perfectly poised for the pandemic.

We are very nontraditional as far as museums go. The fact that they had built this virtual museum way before most museums were really thinking about that is a huge advantage. Before the pandemic hit, we were working on our website, so that should be finished in August. The information is going to remain the same, but the interface is going to be a much more user-friendly experience. And, we are shifting right now to more virtual programs. This is an opportunity to ramp up those programs and it still will be a part of it when we physically open.

America is experiencing a pivotal moment with protests against police violence and racism towards black Americans. What is ABHM’s role?

We just put a statement on our stance on the current moment. Really, we looked to Dr. Cameron to try to think of how to carry forward his legacy, the things that he envisioned or would be doing at this moment.

We’re going to take on this convener role – be a place where people can come and have these very difficult conversations in a safe place where they feel these issues can really be addressed, and then from those conversations, hope to pull out different solutions of what we can do in the future to effect real change.

When Dr. Cameron created this museum, he really intended it to be for all of Milwaukee and for all people. Just because it’s located in Bronzeville and it has ‘Black’ in the title, I want people to know that this is their museum too. Everybody has a place in this conversation about race leading to reconciliation, and we all need to be a part of this to have real change.

As a white person, how do you handle being a voice in conversations about Black lives and the legacy of slavery and racism?

I know there’s a long history of scholars not necessarily being respectful to the communities that they’re studying. What it’s meant for me is having to de-center myself and assume that support role with a lot of listening and not speaking to, but speaking with, others. (I do) a lot of listening, supporting and asking my colleagues and friends of color what I can do to support, rather than speak over.

It’s different for me than for my Black colleagues who have lived with racism, experienced it in their physical bodies for their entire lives. I try not to get too fatigued or turn away from when things get trying or emotionally exhausting, because I know that that’s not a choice that my Black colleagues or my Black friends have – to turn off that emotional labor or the emotional trauma that comes from knowing these things.