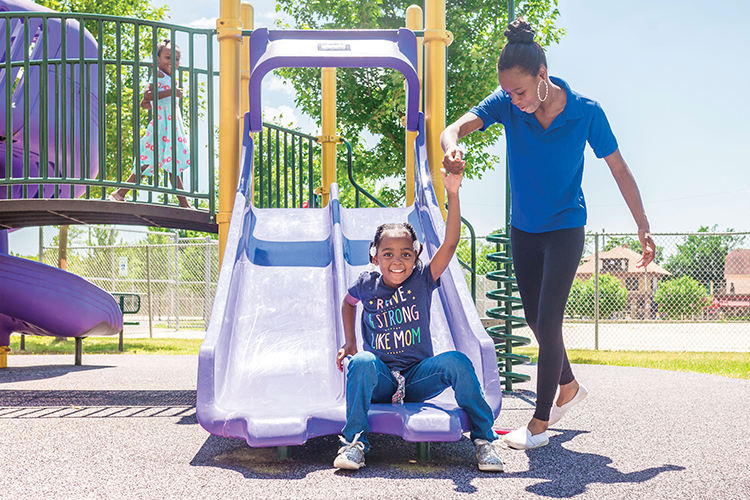 Recovered after her liver transplant, Zanyah zooms down a slide at a Milwaukee park with her mother, Yvonne Huggins. (UWM Photo/Elora Hennessey)

On the eve of the first surgery of his life, 27-year-old Kristian Vaughn was neither nervous nor apprehensive, just determined. Doctors at Froedtert & the Medical College of Wisconsin were about to remove 30 percent of his liver, and Vaughn was walking through hospital corridors to meet the reason why.

His path led to Children’s Hospital of Wisconsin, where 4-year-old Zanyah waited, the picture of excitement. Unlike Vaughn, she didn’t quite grasp the enormity of the situation. She was just glad to finally meet the man who’d give her a chance to not be so sick all the time.

“She ran over and hugged him,” says Zanyah’s mother, Yvonne Huggins. “They just clicked immediately. From that day until now, they have just had a really special bond. He is a very, very sweet person.”

The journey to that first meeting in December 2017, as well as the friendship that followed, is complex.

Vaughn, a UWM alum and current doctoral student in the School of Architecture & Urban Planning, initially explored becoming a liver donor to help another child. The liver is one of the few bodily organs that can regenerate itself, so you can donate part of yours to someone in need, provided you’re a medical match.

“The son of our family friend was critically ill and in acute liver failure,” Vaughn says. “He’s 3 years old, and he’s this beautiful little boy. I thought, ‘I’m healthy, I’m able, and my test results were a strong match.’ I just felt I should do it.”

Before Vaughn could move further in the process, however, the little boy received a transplant from someone else. That’s when Vaughn made an uncommon decision. Knowing how promising his test results were, he still elected to go on the donor list.

The overwhelming majority of living donors know the people who will receive their transplant. But several factors – including blood work, fitness and how his liver was positioned in his abdominal cavity – meant Vaughn could be an ideal donor for another child.

Meanwhile, unbeknownst to Vaughn, Zanyah had suffered through recurring illnesses since age 2. At Children’s Hospital of Wisconsin, she was eventually diagnosed with a rare condition involving the flow of bile.

As Zanyah’s health deteriorated with fevers, vomiting, weakness, pancreatitis and jaundice, she was placed on a transplant list in July 2017. Mother Yvonne was resigned to a long, and perhaps hopeless, wait.

“We got put on the list,” she says, “and all of a sudden, there Kristian was.”

Joyous as it was, the call about a possible donor for Zanyah came during a sad and difficult time for Huggins. She was still grieving the death of another daughter, an infant who died 11 days after birth. But Huggins quickly agreed to move forward with Zanyah’s transplant.

“I had already lost one child,” she says. “Whatever I could do to help Zanyah, to save Zanyah, was what I wanted to do.” Vaughn and Zanyah were officially matched, and the transplant surgery was scheduled.

As the day approached, Huggins explained the process to her daughter in terms Zanyah could understand. “I told her it was like a car that isn’t working,” Huggins says. “Sometimes, you have to take a part out and replace it with a new part.”

On Dec. 11, 2017 – two weeks before Christmas – Zanyah, Huggins and Vaughn had that first face-to-face meeting. “It was one of the best days of our lives,” Huggins recalls. “I said, ‘Zanyah, this is where your new liver is going to come from. Kristian is going to give you part of his liver.’ I was holding back tears, but Zanyah was really excited.”

The next day, surgeons removed a portion of Vaughn’s liver during a 10-hour procedure at Froedtert. The tissue traveled through a tunnel to Children’s Hospital, where it was transplanted into Zanyah. “The transplant team and the people in ICU were amazing,” Huggins said.

Seven months later, in summer 2018, 5-year-old Zanyah was still recuperating, with a few “bumps in the road” that Huggins says are expected in the first year after transplant surgery. Because Zanyah’s immune system remained suppressed, she still hadn’t been back to school since the surgery. But in July, the family was able to visit Disney World through the Make-A-Wish Foundation.

Vaughn, meanwhile, is back at his job as a land use and economic development specialist at GRAEF, and he continues his doctoral studies at UWM. He says the surgery just meant “pushing the pause button” on his life for a few months of recuperation while his liver began regenerating, a small price to pay to help Zanyah.

“She was being treated for a medical condition that affected her quality of life,” Vaughn says. “She had regular hospitalizations and wasn’t able to run around or go to preschool or kindergarten or do things other children her age could do. I just wanted to ensure that her life would be successful, and she’d have the same opportunities as other children. That was important to me.”

Today, their connection endures. Vaughn and his family remain friends with Zanyah and her family.

“I told Kristian that he was the person that saved Zanyah’s life,” Huggins says. “I wanted her to know him. During her entire journey, it’s only right that Kristian is a part of things.”