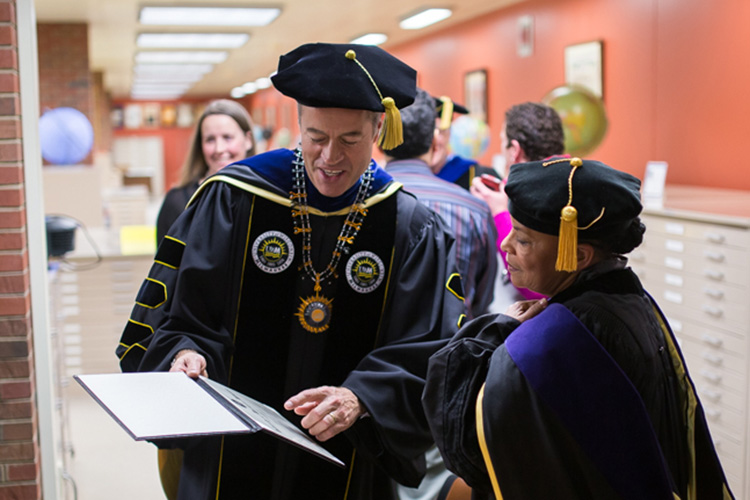 University of Wisconsin-Milwaukee Chancellor Mark Mone speaks with former French Minister of Justice Christiane Taubira on Saturday after a ceremony in which Taubira was granted an honorary doctorate of laws and human rights. (UWM Photo/Elora Hennessey)

Former French Minister of Justice Christiane Taubira received an honorary doctorate at UWM on Saturday, telling guests at the special ceremony that they must “maintain a constant vigilance” when it comes to human rights.

The former economics professor served as France’s justice minister from 2012 until Wednesday, when she resigned in opposition to a proposal to revoke citizenship from convicted terrorists with dual nationality.

“We are going through a difficult period,” Taubira told about 150 guests gathered at the American Geographical Society Library. “We are confronted with chaos, disorder in certain parts of the world.”

Americans, Europeans and others must set examples in respecting human rights and ethical behavior, she said. Respect for the rule of law can be restored, but “we can only do it if we keep the dialogue among people going.”

Taubira spoke in French, with an English translation available for guests who needed it. Nominated for an honorary doctorate of laws and human rights by the UWM Department of French, Italian and Comparative Literature, she was recognized for embracing the role of a public intellectual and for her commitment to the values of liberty and equality for all. She received the degree at a special ceremony because she could not attend the December commencement.

Provost Johannes Britz introduced Taubira as an “uncommonly deserving candidate” who “has been a leading advocate for the most marginal and vulnerable.”

Born in 1952 in French Guiana, Taubira was the first woman elected as Guiana’s deputy to the French National Assembly. She served four consecutive terms from 1992 to 2012, when French President François Hollande appointed her Minister of Justice. She held that position until she resigned in protest of his proposal to strip certain convicted terrorists of their French citizenship.

France has been the site of two major terrorist attacks. A multi-day terror spree that started at the office of Charlie Hebdo magazine left 17 victims and three terrorists dead in January 2015. In November, 129 people died in multiple attacks in Paris.

Taubira urged her audience to ask themselves, “what do we know about this rage that inhabits certain people and makes them destroy, kill people they don’t even know?”

“We have to understand it,” she continued, “and come back to reason that has to feed moral rights.”

Taubira rose to national prominence in 1999, when she introduced a bill that became the Taubira Law, which challenges the French state to address its role in the slave trade and slavery. During her tenure as Minister of Justice, Taubira undertook the overhaul of France’s penal system, focusing on alternatives to incarceration for juvenile offenders. She is regarded as a leading champion of France’s “marriage for all” act, which legalized same-sex marriage.

“Her political engagement embodies an outstanding commitment and dedication to principles the UWM community holds dear: the struggle for human rights, human dignity and equal rights for all,” said Sarah Davies Cordova, a professor of French who helped coordinate Taubira’s visit.

Taubira said she was honored to be recognized for her human rights work in the United States, where the Quakers set an early example for equality between men and women and the U.S. Constitution provided a model for France’s bill of rights, known as the Declaration of the Rights of Man and of the Citizen.

She also said it was an honor to be at UWM, where “the quality of its teaching staff shines” and students from around the world are welcome.

“So I have this consciousness of where I am,” she said, “and I am profoundly honored by this distinction.”