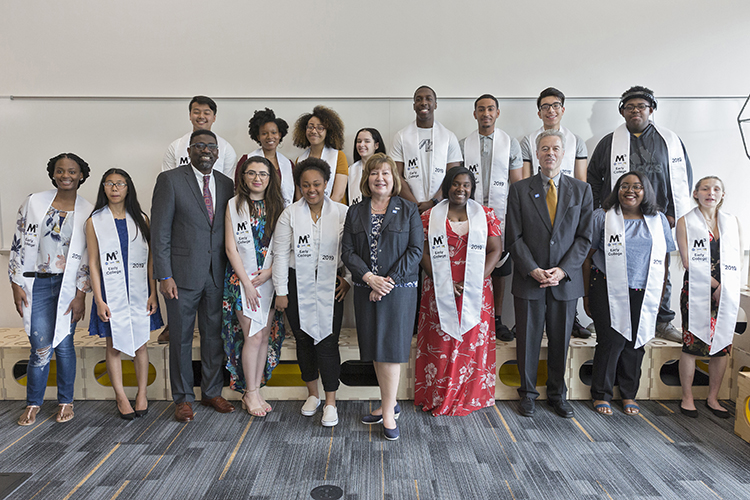 Eric Andrekopoulos tugged on the shiny white sash draped around his neck and shoulders before posing for pictures.

The graduation stole represents the ceremonial end to four months of hard work for Andrekopoulos as part of the inaugural class in the M3 Early College pilot program. M3 (pronounced M-cubed) is a multifaceted collaboration among the University of Wisconsin-Milwaukee, Milwaukee Area Technical College and Milwaukee Public Schools.

“It’s another big moment in my life,” Andrekopoulos said with a smile after the ceremony on Thursday at the new UWM Welcome Center. “I feel like I’ve grown … I exposed myself to a little more and I’ve learned a lot.”

The Milwaukee School of Languages senior is one of 32 MPS students who earned their stoles after completing the M3 Early College pilot program, which debuted in the spring 2019 semester. Students get a taste of college while earning college credits.

It’s one of a variety of M3 programs and initiatives designed to help achieve many goals, including boosting student achievement, ensuring that students have the necessary resources to advance to college and into the workforce, and closing the equity gap in educational attainment.

“We need to scale this,” UWM Chancellor Mark Mone told students and parents. “We need to open more doors for individuals to education any way we can have the type of impact and achieve success rates and closure in terms of the gaps and pull across those bridges.”

About 160 MPS students have applied for Early College program for the 2019-2020 school year, when enrollment is expected to at least triple in size. Students who complete the dual enrollment program will earn 10 college credits, including four MATC math credits, three MATC English language arts credits and three UWM educational psychology class. The credits also count toward their high school degrees.

All three M3 institutions are contributing time and resources to the Early College program. MPS provides lunches and pays for the classes. MATC provides bus passes for all the students. UWM adjusted one of its educational psychology courses – originally designed for first-year college students – so that it could be tailored to high school students.

The initial results from the inaugural class are encouraging.

For instance, Early College students completed the Math 200 class with an 87% pass rate, 27 points higher than the average pass rate for high school graduates who take the course at MATC, according to school President Vicki Martin.

Completion of Math 200 also meant that students completed the math requirement for 90 percent of the programs offered at MATC. The course is also transferable to four-year institutions.

All members of the inaugural class plan to attend college or enter the armed services. M3 graduate Joelene Jobe, who attended Rufus King High School, plans to become a family doctor but also wants to major in history. She says one of the biggest takeaways for her from the program was the need to be vigilant about managing her time.

“It helped me to open up my eyes,” Jobe said. “I have a lot more time (than in high school), but I have to be aware to actually use that time to be productive as well.”

Andrekopoulos plans to join the Marine Corps and wants to become an aviation mechanic. It’s the next step toward his eventual goal of going into aerospace engineering and achieving a dream of building a supersonic aircraft by himself.

He says was nervous about the workload going into the Early College program in January, so much so that he felt “doomed to fail.”

Andrekopoulos proved himself wrong. His mother and four brothers watched proudly as he delivered one of three student speeches at the ceremony that was also attended by MPS Superintendent Keith Posley.

“I see you’re trying to expand” the Early College program, Andrekopoulos says, “and that’s a good thing to do especially for upcoming generations.”