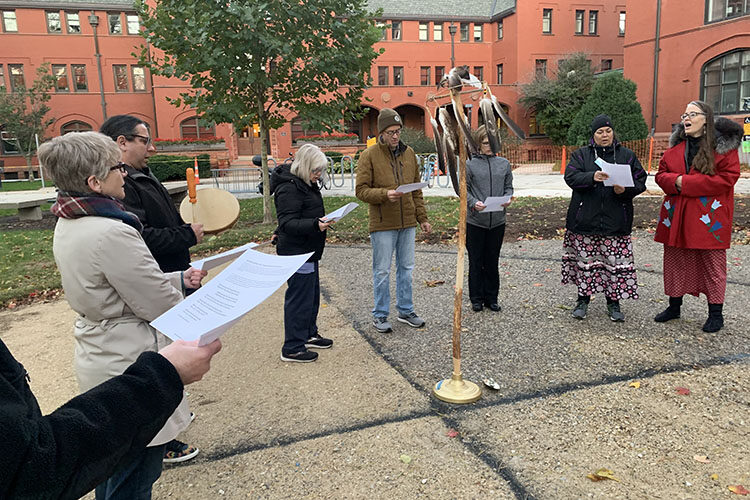 A sunrise song is sung during a ceremonial gathering last week to mark the installation of a fire circle at UWM in front of Merrill Hall. (Photo courtesy of Kari Pink)

The University of Wisconsin-Milwaukee is installing a fire circle in front of Merrill Hall to recognize Milwaukee’s Indigenous peoples and provide a place of celebration for Native American students and others.

A ceremonial gathering was held Tuesday morning, Oct. 26. The gathering included the posting of an eagle staff and singing of sunrise songs as the moon set and the sun rose in the east over the campus.

The fire circle includes 16 granite stones, with carvings on a central stone depicting Lake Michigan, the confluence of the three rivers that meet in Milwaukee and the historical location of Potawatomi, Ho-Chunk and Menominee villages. (The central stone is still in transit and will be installed when it arrives.)

These three nations were stewards of the region until the early 1800s, when they were removed by the United States Army and several treaties limited the area where they could live. Today, although their nations are located north of the city, citizens of these and other Indigenous nations remain an important part of Milwaukee.

Fire circles are found in all parts of the globe, said Margaret Noodin, professor of English and American Indian Studies and director of the Electa Quinney Institute for American Indian Education. Noodin is also associate dean, humanities, in the College of Letters & Science.

“It helps us remember that Indigenous people have centered themselves around the land and water they live on.”

Milwaukee has the largest population of Indigenous peoples east of the Mississippi, but native people can feel invisible, Noodin said. “Having this fire circle at the heart of campus pays homage to an often-overlooked group.”

Chris Cornelius, an enrolled member of the Oneida Nation of Wisconsin and founding principal of  studio:indigenous, designed the fire circle. A member of the UWM architecture faculty since 2004, and an alumnus of UWM’s School of Architecture, Cornelius was recently chosen as the chair of the Department of Architecture at the University of New Mexico, effective Nov. 1. He is a prominent advocate for the awareness of architecture’s connection with culture, particularly American Indian culture.

Chancellor Mark Mone said he sees the fire circle as “important for celebrating our Indigenous cultural events and more — as a gathering place for celebrations, commemoration and honor. It is a place of ceremony and honoring tradition — of ancestors, roots, the earth in respectful and meaningful ways.”

“In that sense,” he added, “it is a grounding or touchstone for us to cherish, and I’m grateful for the leadership of Drs. Noodin and Cornelius and the staff of the Electa Quinney Institute and American Indian Studies program to help support this. I am also very grateful for the generous support from Bader Philanthropies Inc. and Dr. Isabel Bader.”

Developing a fire circle has been one of Noodin’s goals ever since she arrived on campus in 2014, she said. After she and others in the community met with Isabel Bader, an ally of First Nations (the term describing most Indigenous people in Canada), the project became a reality with funding from Bader Philanthropies.

The fire circle will provide a visible space for performances, educational activities and ceremonies to increase the awareness of Native Americans in Milwaukee and at the university, according to Noodin. For example, it will provide a place for people to gather and sing in a space where they are reminded of their ancestors. “In many Indigenous traditions, stories, songs, drums and stones are all considered to be animate parts of the world we share, with the power to heal and connect us.”

The fire circle will be shared with other groups, Noodin said. For example, the Celtic Studies program planned to use it for Samhain, a Gaelic holiday celebrating the harvest and the beginning of winter.

The gathering at the fire circle installation honored the heritage of Native American people at the university and in the community. The eagle staff present at the gathering belongs to the UWM campus community. It was designed by Diane Amour, longtime coordinator of American Indian Student Services on campus, and created by Michael Zimmerman Jr. as a symbol of strength and protection.