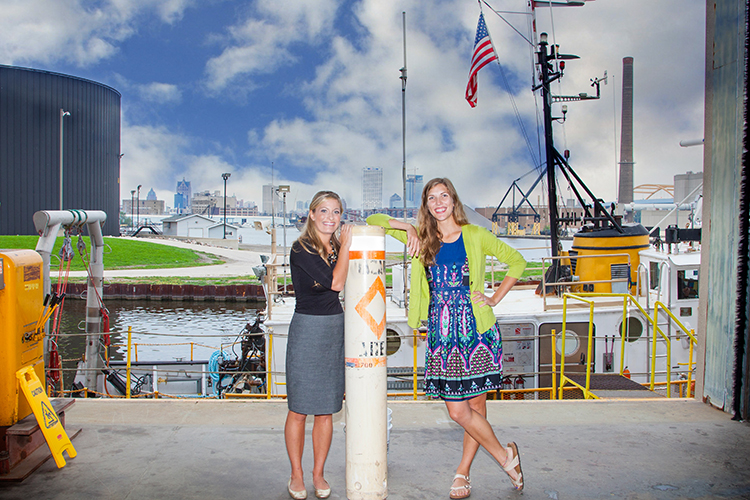 Danielle Cloutier (left) and Shelby LaBuhn, shown at the School of Freshwater Sciences, were chosen for Knauss Fellowships for 2017. (UWM Photo/Pete Amland)

Students in the School of Freshwater Sciences get plenty of opportunities to plunge into the waters in their studies. Now two doctoral students are plunging into policymaking.

Danielle Cloutier and Shelby LaBuhn, both doctoral students in the School of Freshwater Sciences, have been awarded Knauss Fellowships through the National Oceanic and Atmospheric Administration’s Sea Grant program. The fellowships, named for John A. Knauss, a former NOAA administrator, will give them an opportunity to work on water policy issues in either the executive or legislative branch of government for a year, starting in January.

“While I’ve been here at UWM, I’ve learned the research, and worked on the boats, and I can do the fieldwork and analyze the data,” LaBuhn said. “Now I get to see how the research we do can influence policy.”

In early December, the two students traveled to Washington, D.C., to be matched with an office in the executive branch of government or with a legislator or legislative committee.

La Buhn will be working with NOAA’s Climate Program Office in the Global Ocean Observing System group, helping them maintain their observing network. She will be helping to organize two large meetings with an  international group of researchers.

Cloutier will be working in the office of Sen. Brian Schatz of Hawaii. She will be mainly focusing on climate change and energy policy, she said.

LaBuhn’s interests focused on Great Lakes water from an early age. She grew up in Michigan near Lake Huron and did her undergraduate work in environmental chemistry at Lake Superior State University.

“Water was just a natural draw for me,” LaBuhn said. “There’s something about protecting the Great Lakes that’s really resonated with me.” Her research work has focused on the causes of hypoxia – the loss or depletion of oxygen in the water, creating dead zones – particularly in Green Bay.

Cloutier also was drawn to water by her proximity to Lake Michigan.

“Growing up in southeast Wisconsin and Racine being surrounded by the Great Lakes, it was just such a big part of my childhood. Protecting that resource became really important to me,” Cloutier said. Her research has focused on microbial ecology, working with Professor Sandra McLellan studying contaminants in water.

At UWM’s School of Freshwater Sciences, both students found their niche.

“It was a really perfect fit for me because there really aren’t a lot of places that are devoted to environmental microbiology,” said Cloutier. “Most people that work in microbiology concentrate on the medical field. When I read about Dr. Sandra McLellan’s work (on water contamination), I was really excited.”

LaBuhn heard about the then-new School of Freshwater Sciences from family members who lived in Germantown. “I’d never heard of it, but I knew I liked the idea of studying nutrient cycling and oxygen. I went on the website and (Associate Dean) Val Klump’s research popped up. I emailed him and he invited me for an interview, and the rest is history.”

LaBuhn eventually would like to work for NOAA or the EPA. “A lot of what I do aligns well with what they do.” She’s already seen policy results in the work being done in Green Bay as legislators and citizens become interested in the work she and her colleagues are doing.

“You collect all this data and sometimes you don’t see it going anywhere, but when you see it being used by people to make a change, that’s really gratifying.”

Cloutier is interested in doing her Knauss Fellowship with an office that represents a Great Lakes state, but she also is open to the East Coast since she has family there.

Her long-term career goal is going “anywhere that I can use my understanding of scientific research to make change in my community or for my country. I think pursuing a career in science policy is a good way to go.”

LaBuhn and Cloutier were the only Knauss Fellows chosen from Wisconsin this year. The School of Freshwater Sciences has had four previous Knauss Fellows since 2011, all of whom are working in the water industry.

Other Knauss Fellows from UWM

Catherine Simons, who earned her master’s in 2014, spent her 2015 fellowship year as a policy liaison in the Office of the Oceanographer of the Navy.

“My fellowship year was a unique glimpse into the inner workings of D.C., the upper echelons of the military and federal government,” she said. “My office at the Naval Observatory, where the vice president lives, was a cool perk.”

Simons, now a senior policy adviser with the U.S. Committee on the Marine Transportation System, said her experiences at UWM helped encourage her self-reliance.

“Above all else, I owe a debt of gratitude to my graduate adviser, Dr. Jenny Kehl, who tirelessly encouraged my academic and professional pursuits.

Joe Fillingham, a Knauss Fellow in 2011, worked for NOAA’s Office of Laboratories and Cooperative Institutes.

“I learned a lot about how the federal science policy process works, from the legislative side all the way to the individual researchers conducting experiments, building models, or collecting data in the field, while also learning invaluable skills in institutional organization, strategic planning and program management,” said Fillingham, who received his doctorate in 2015. He is now science lead at Wellntel, water tech startup in Milwaukee.

He credits the School of Freshwater Sciences’ interdisciplinary approach to learning about freshwater dynamics and ecosystems with helping prepare him for his current career. He added that he had “the opportunity and support to think outside the box about how to use everything I learned in classes and through my research in unique and useful ways to build a career in the world of freshwater.”

Kristina Surfus was a Knauss Legislative Fellow in 2015, working in Sen. Tammy Baldwin’s office. She earned her master’s in 2014, and is now manager of legislative affairs for the National Association of Clean Water Agencies.

“Working in Congress is an unparalleled experience if you’re interested in policymaking,” Surfus said. “I gained an understanding of how members of Congress and congressional committees engage on issues and advance their priorities, both legislatively and politically.”

Her experiences at the School of Freshwater Sciences prepared her well for working with Congress, she added.  “At SFS I explored freshwater from very diverse perspectives — from the dynamics of watersheds, to the human health impacts of environmental management decisions, to the economic drivers impacting freshwater resources. This helped hone my systems thinking and is invaluable in developing policy.”

The other Knauss award winner, Caroline Mosley, who earned her master’s degree in 2014, is now digital content producer for the Wilderness Society.

During her fellowship in 2015, Mosley worked in NOAA’s Oceanic and Atmospheric Research Communications Office. “I had a fantastic experience learning how to use my scientific background to communicate technical topics to the public in an interesting and exciting manner,” she said. Her experience at the School of Freshwater Sciences helped her learn about the importance of experimental design, conducting sound research and publishing in a peer-reviewed journal, she added.

“All of this experience was crucial when I was on the ‘other side’ of science, that is, using scientific findings to create better policies to protect water resources. It also helped me better talk to scientists in the field, since I was used to using more technical terminology.”