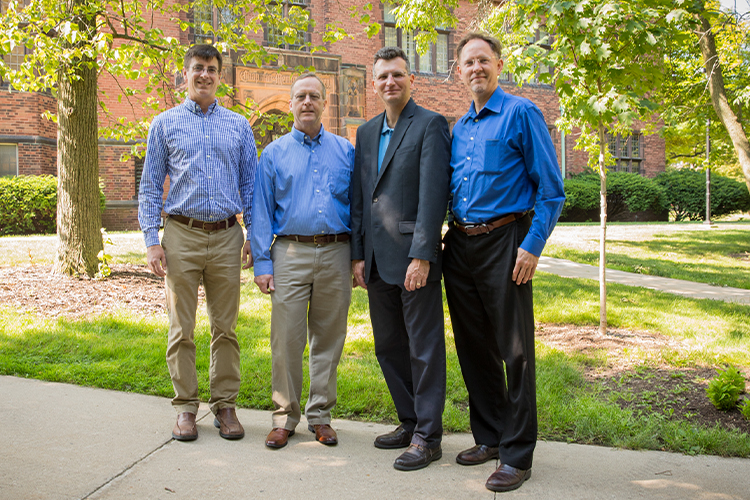 John Reisel has been at UWM for 24 years and has had only two female departmental colleagues in all that time.

Jacques du Plessis was raised by a mother who was the main breadwinner in his family, but whose work was consistently undervalued and underpaid because she was a woman.

As part of this effort, the university is offering Male Allies and Advocates workshops Sept. 27 and 28 in the fourth floor conference center of the Golda Meir Library (RSVP here). All male faculty members are invited to the interactive workshops, which will look at ways to improve the recruitment, retention and advancement of women, especially in the STEM (science, technology, engineering and mathematics) areas.

The interactive workshops will be based on a National Science Foundation-funded model developed at North Dakota State University designed to improve gender equity through the direct and proactive engagement of male faculty members.

Tools to be an effective ally

Among the goals of the workshop are to give male faculty the tools they need to serve as effective allies for gender equity in all departments.

“I’m happy to go,” said Kristian O’Connor, professor of kinesiology. “It makes us a stronger institution. This campus needs to hold on to its strong faculty. If an environment is created where someone doesn’t feel welcome here and leaves, that hurts us as a university. I think it’s great we’re bringing this program to campus, and I look forward to participating.”

If UWM does not have many female faculty in a department, du Plessis said, potential candidates may “think this is not the kind of environment they want.” As part of a strategy to recruit and retain women faculty members, he added, “It’s important that our culture shows we really value female faculty.”

Concerns about recruiting and retaining women faculty are especially strong in the STEM fields.

Nadya Fouad, one of the organizers of the workshops, is the special assistant to the provost for conflict resolution as well as Mary and Ted Kellner endowed chair of educational psychology. She has researched and written extensively about barriers to women in the STEM fields and engineering, in particular.

Getting more in the pipeline

Getting more women into the pipeline at the elementary, high school and undergraduate levels is essential to increasing the numbers who go on to become university faculty members, said Ethan Munson, professor of computer science and associate dean for academic affairs of the School of Engineering and Applied Science.

“If there is not a large pool to draw from, that leaves you with some challenges,” said du Plessis.

While a larger pool of candidates is one key to recruiting more women faculty, the support of colleagues is critical to retaining them.

“I think one of the problems for women in many STEM fields is that there aren’t very many of them, and it is easy for them to feel like they’re alone and they shouldn’t stand up for their rights and respectful treatment,” Munson said.  “Having allies, who may not be women themselves, but who can do some of the ‘standing up’ can create a climate where people feel they have the courage to insist on respect. Hopefully that will allow us to retain more of the female faculty we are able to recruit and over time their numbers will be larger.”

Encouraging and recruiting more women into fields where they are underrepresented helps build a critical mass, agreed Reisel, that will make it easier for other women to feel comfortable.

While departments may not actively discourage women faculty members, colleagues sometimes behave in ways that make them feel less valued. Those are attitudes the male allies need to help address. Reisel, O’Connor, du Plessis and Munson gave a number of examples:

Becoming effective proponents of gender equity is mainly a matter of respect – for all faculty colleagues.

“The fundamental principle,” said Reisel, “is treating others as you would like to be treated.”

While gender equity is the focus of these upcoming workshops, the university plans to offer future similar workshops focused on other groups that are underrepresented at UWM, according to Fouad.

“Our guiding values are foundational to everything we do at UWM,” said Chancellor Mark Mone. “Being a caring, compassionate and collegial community characterized by mutual respect and safety is a beacon for these workshops. They are an important part of enlisting male faculty members to encourage and support change within their departments and schools.”