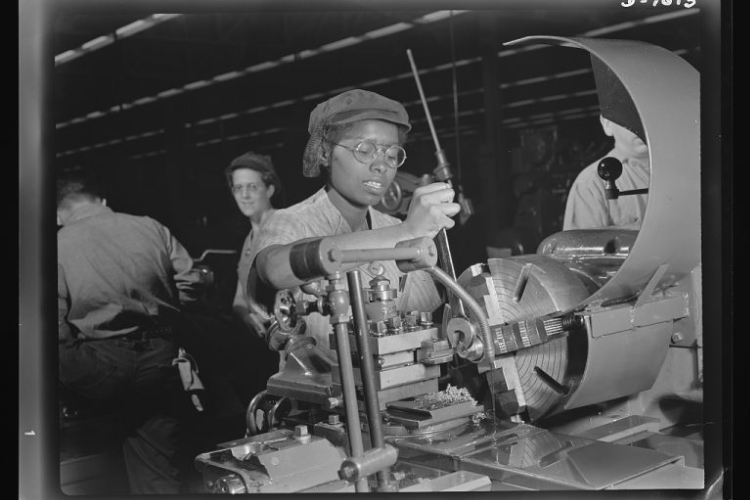 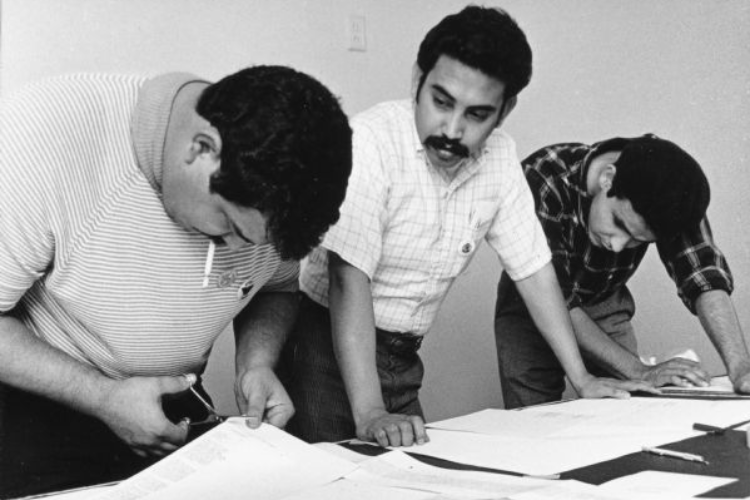 Roberto Hernandez (left), along with Esequiel Guzman (center) and another man work to set the layout of an issue of the "La Guardia" newspaper. (From the Wisconsin Historical Society, WHS-91127) 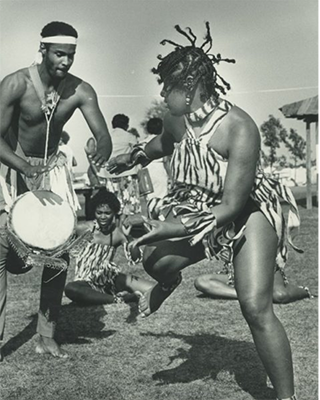 A drummer and dancer perform at the first African World Festival held in 1983 on the Summerfest Grounds. (From the Historic Photo Archive of the Milwaukee Public Library) 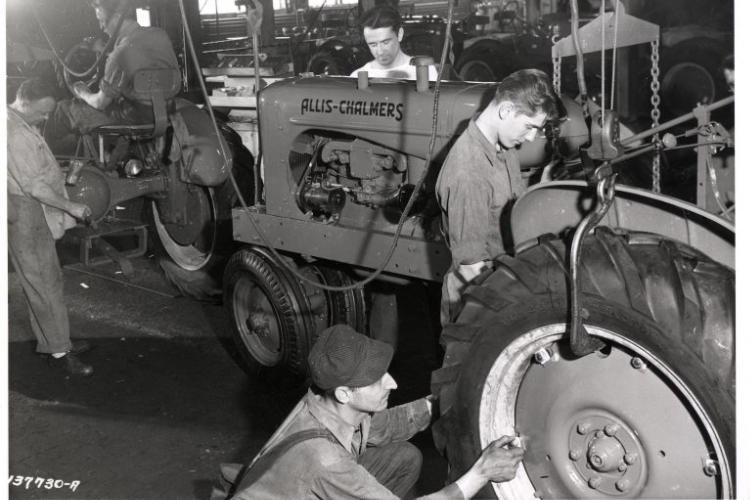 Allis-Chalmers was the driving economic force in West Allis. In this 1930s photo, employees build tractors along an assembly line. (From the Milwaukee County Historical Society) 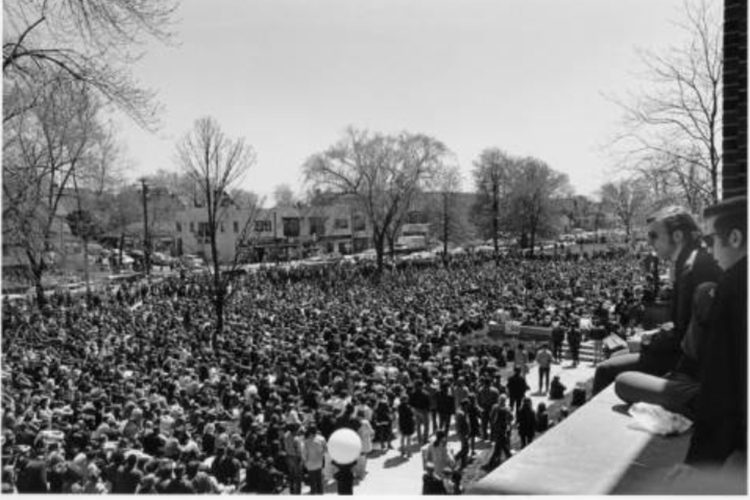 An antiwar crowd gathers at UWM in May 1970 during a month that witnessed the invasion of Cambodia by U.S. military forces and the shooting of student protestors at Kent State University by National Guard troops. (From the UW-Milwaukee Photographs Collection. Archives, University of Wisconsin-Milwaukee) 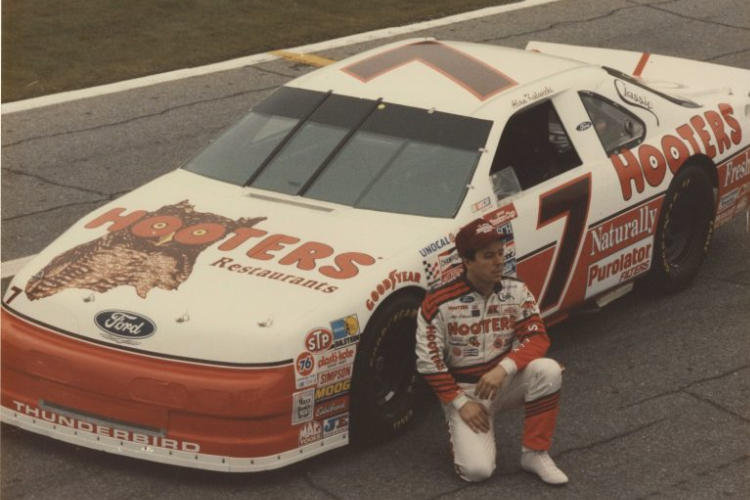 Auto racer Alan Kulwicki of Greenfield, who earned an engineering degree in 1977 from UWM, achieved great success as a short track driver before his untimely passing in 1993. (Photograph courtesy of the Milwaukee County Historical Society) 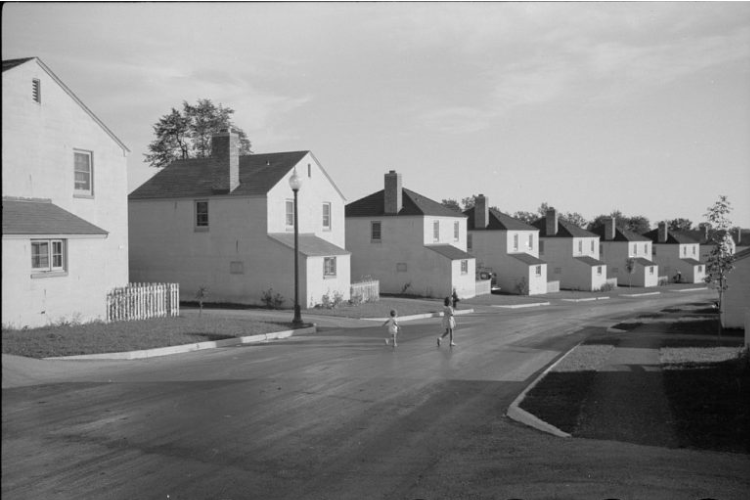 Children play on the street in this 1939 photograph of Greendale houses. The federal government developed Greendale in 1936 as part of the Resettlement Administration’s Greenbelt Towns Program, a New Deal initiative. (From the Library of Congress Farm Security Administration - Office of War Information Photograph Collection) 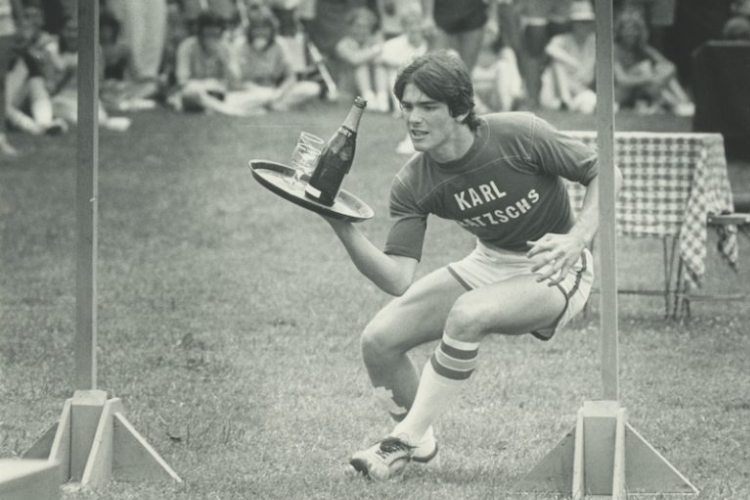 A man balances a tray with wine and wine glasses as he takes part in the Bastille Days waiters race in 1983. (From the Historic Photo Collection of the Milwaukee Public Library) 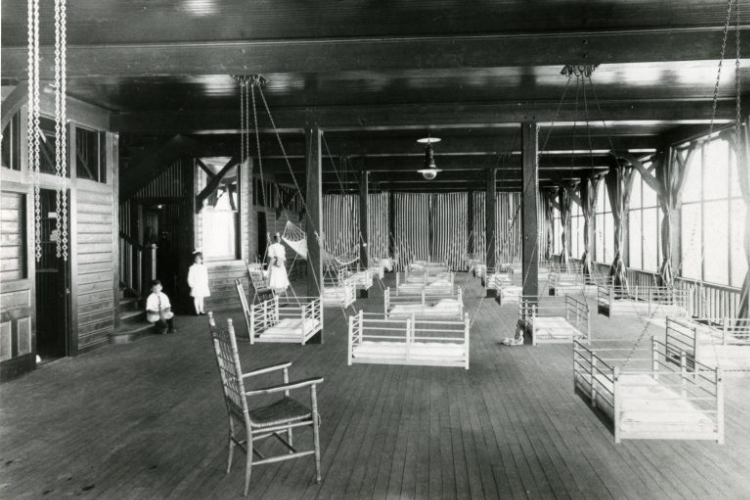 Hammocks for babies swing on a porch at Lake Park Pavilion sometime between 1894 and 1914. The pavilion was used as part of the Milwaukee Infants Hospital for children with tuberculosis. At the time, it was believed that fresh air would cure many breathing difficulties, including TB. (From the Historic Photo Collection of the Milwaukee Public Library) 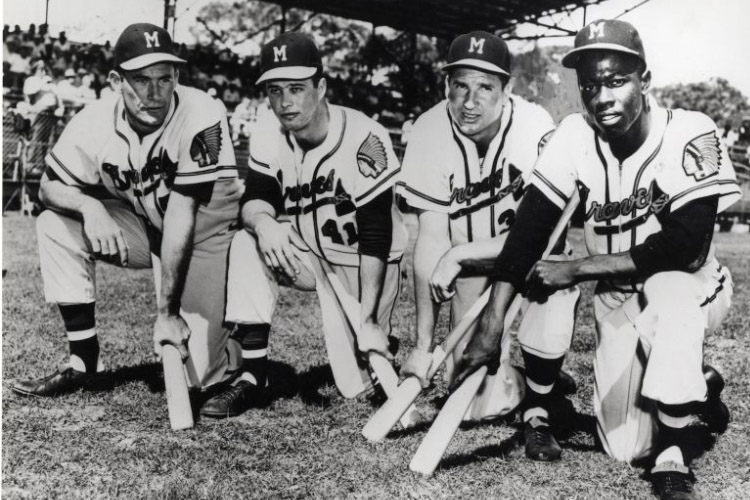 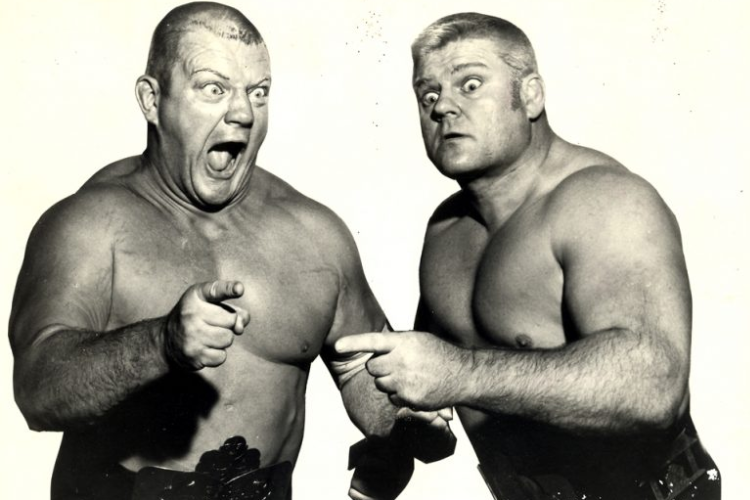 A popular tag team in the 1950s and 1960s, Dick “The Bruiser” Afflis is pictured with his wrestling partner, Milwaukee-born Reggie “The Crusher” Liswoski. (Accessed via FindAGrave. Image courtesy of Steve Guthrie) 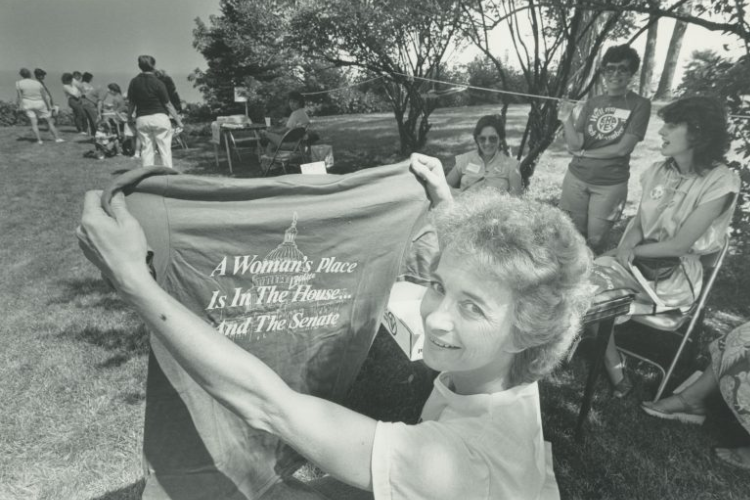 Cheryl Keenan, Milwaukee's representative in the National Organization for Women, holds a shirt that reads "A woman's place is in the House...and the Senate" at the city's first women's festival in 1984. (From the Historic Photo Collection of the Milwaukee Public Library)

Plenty of cities have an encyclopedia-style history online, but few have a resource like Milwaukee now does.

Curated by UWM’s History Department, the Encyclopedia of Milwaukee tells the city’s story through an expanding catalog of narrative histories written and edited by experts. No Wikipedia-type amateur entries here.

The Encyclopedia of Milwaukee is a living, interactive resource that digitally compiles entries on significant people, moments and places in Milwaukee’s history. The collection of histories ranges from Milwaukee’s foundational breweries to local landmarks like the Mitchell Park Domes, from Billie the Brownie to the 1993 cryptosporidium outbreak.

After its debut in 2008, the Encyclopedia of Milwaukee began launching weekly online entries in 2016. Now, with almost 700 entries, the encyclopedia has evolved to include an extensive collection of images, articles, hyperlinks, external resources and commentary.

A ‘first stop’ for researchers and the curious

Project director and associate lecturer at UWM’s History Department Joseph Walzer has been overseeing the Encyclopedia of Milwaukee since 2018. He describes the project as “a first stop for researchers and curious general readers on their journey into the history of the Milwaukee metropolitan area.”

The entries are written by local historians, authors, experts and academics, which are then subject to detailed fact-checks and editing chains.

John Gurda, a historian on the board of directors and UWM alum, has dedicated much of his career to telling Milwaukee’s history through local projects, books, lectures and the Emmy-award winning PBS series “Making Milwaukee.”

“The real values of EMKE are its accessibility and its dependability,” Gurda said. “It’s the first digital resource of its kind in Milwaukee, and the articles are the product of sound, extensively reviewed research. In a Wiki-world, EMKE stands out boldly for its fairness, accuracy and breadth.”

Walzer attributes the project’s accessibility to two functionalities that allow users to more easily navigate and reference the encyclopedia.

By including footnoted citations and bibliographic information, readers can find outside resources and links to further readings.

Another recently developed genre of “understories” are included with some of the entries, providing additional insight into how a topic was researched. An understory attached to an entry on Milwaukee’s urban architecture, for example, divulges the “hidden history” of the Case of the Missing Baby Hammocks, which were once used by the Milwaukee Infants Hospital for children suffering with tuberculosis.

The encyclopedia provides another key feature where readers can leave online comments and critiques of the content.

“These comments are important contributions to ongoing historical conversations and will inform possible future revisions to EMKE,” Walzer said.

The encyclopedia recognizes that Milwaukee’s history is based on a community-city symbiosis that involves surrounding counties including Waukesha, Ozaukee, Washington, Walworth, Racine, Kenosha and Sheboygan.

The encyclopedia has become a highly valued resource for students, teachers, researchers, journalists and the curious public.

Some UWM instructors and local high schools have integrated the tool into their curriculums or used entries in projects for National History Day.

“EMKE is a one-stop information source that I’m sure will see heavy use this summer and in the years to come,” Gurda said regarding the anticipated influx of reporters and national attention surrounding this summer’s Democratic National Convention. “Journalists should know more about it and would be professionally irresponsible not to use it.”

With active Facebook and Twitter pages, the Encyclopedia of Milwaukee has gained increasing attention through regular posts including “on this day in history” entries. Users are able to comment their own memories, offer suggestions, insights and express appreciation for the resource.

Walzer says the future of the project is working toward improving accessibility.

“We are working on two new features that will be launched in coming months: a curricular site that will offer teachers resources for teaching Milwaukee history, and a project we are calling Documenting Milwaukee (DMKE), which will be a digital gallery of student-produced curations of primary sources (documents, letters, images, objects, sound and video recordings) from Milwaukee’s history,” Walzer said.

Walzer hopes that these additional features will not only inform but also generate a deepened curiosity for Milwaukee’s complex and elaborate history.