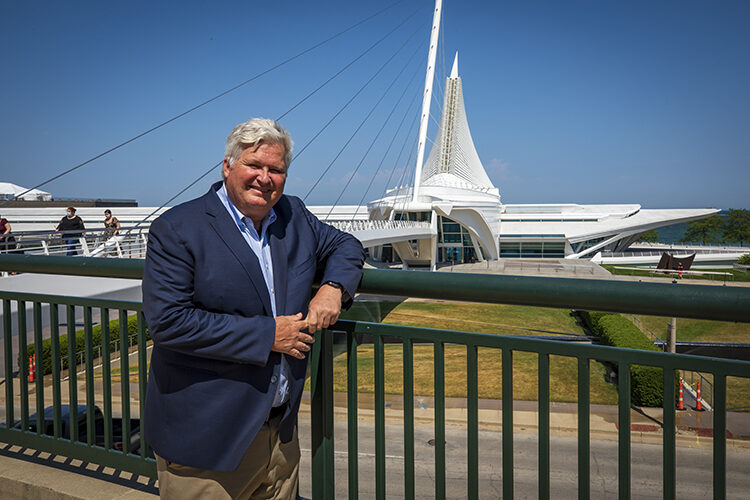 John Kissinger started his building career in the sandbox. He went on to help build such iconic Midwestern structures as the Wisconsin Center, the Quadracci Pavilion at the Milwaukee Art Museum, Chicago’s McCormick Place West addition and the renovation of Lambeau Field.

Kissinger is the president and CEO of GRAEF, a multidisciplinary engineering, planning and design firm that works with clients throughout the United States on public and private buildings.

UWM was a natural choice for Kissinger, a 1979 graduate of the College of Engineering & Applied Science. His mother was librarian at the university, and all seven children in the Kissinger family went to UWM. He knew from those early days playing with Tonka toys in his sandbox that he wanted to be a builder.

“A lot of people don’t know what they want to be when they go off to college, but I knew I wanted to be an engineer, a structural engineer.” UWM was close to his family’s east side home, and “I knew they had a good engineering school,” he said. “It seemed like a natural fit at the time.”

The faculty was outstanding, he recalled. “The education I received was top-notch and has helped me tremendously to be successful in my career.”

After completing his graduate degree at UW-Madison, he worked at several engineering firms, but was looking for a company where he could be involved in more varied projects. While he was working in Chicago, he saw an ad for a position at GRAEF and applied.

He started out as a staff engineer and worked way up the ladder, enjoying the many different projects. “It was the work I wanted to do.”

At GRAEF, he added, he has also had the good fortune to work on, and often manage, large multidisciplinary teams.

The Calatrava addition to the museum, designed by architect Santiago Calatrava, remains his favorite project.

“Working with Calatrava, creating a masterpiece in Milwaukee, was a highlight of my career,” he said. “It was a challenging project, but we got it done and it turned out great,” he said. “It’s a work of art.”

The Calatrava addition, which was Time Magazine’s No. 1 Design of 2001, is celebrating its 20th anniversary this year. Kissinger is one of only 20 or so people who know how the iconic Burke Brise Soleil – the soaring wings that open and close over the museum – works.