That’s the view of Richard Popp, assistant professor, Journalism Advertising and Media Studies, in his new book, “The Holiday Makers.”

The book explores the effects that mid-century print media advertising had on American consumer culture.

Before the 1920s, travel was a luxury only affordable to affluent people because the high costs of transportation prevented average consumers from visiting faraway destinations, says Popp. However, with the introduction of vacation time in the workplace beginning in the 1930s, American families started to make travel part of their lives. 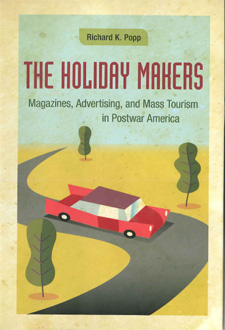 Advertisers were eager for this change. They were excited about pushing “the industry’s long-term agenda to redefine tourist travel as an expectation of American life,” says Popp.

According to magazines published in the 1930s and ’40s, the travel industry was going to explode, making trips more affordable for the average citizen, he adds.

By adapting their advertising language, publications were able to sell to readers from a broader demographic, says Popp. Using older terms to define a newer idea such as air travel helped consumers make sense of this changing industry.

The goal of magazine advertisers was to make it seem as if everyone was traveling and that it could be affordable across all income levels, he says.

“They sold the idea of vacationing to the millions of middle-income people for whom it was a new, and sometimes dubious, idea.”

Photographing exotic destinations sparked geographic curiosity throughout the country, and Americans developed a desire to sightsee and experience different environments, according to his book.

Popp’s research on these advertisements focused mainly on Holiday, a 1940s magazine published by Curtis Publishing. The magazine was a “window into travel at that time” says Popp. Postwar print media like The Holiday were able to shape the ideas consumer society had about travel, mobility and social class at that time, he adds.

At the same time, though their advertising strategy was targeted to a very broad demographic, advertisers still wanted to make travel seem exclusive, not a mass-consumed product. Advertisers encouraged taking a trip to an exotic destination, unheard of in mainstream culture. They were selling vacations as a “once-in-a-lifetime experience,” says Popp.

As these new ideas of vacation progressed, and people began to take planned trips, the notion of enjoying unstructured free time slowly faded. “Mass tourism – a phenomenon that in many ways symbolized the full democratization of leisure in consumer society – helped to eventually diminish the presence of free time in American life.”