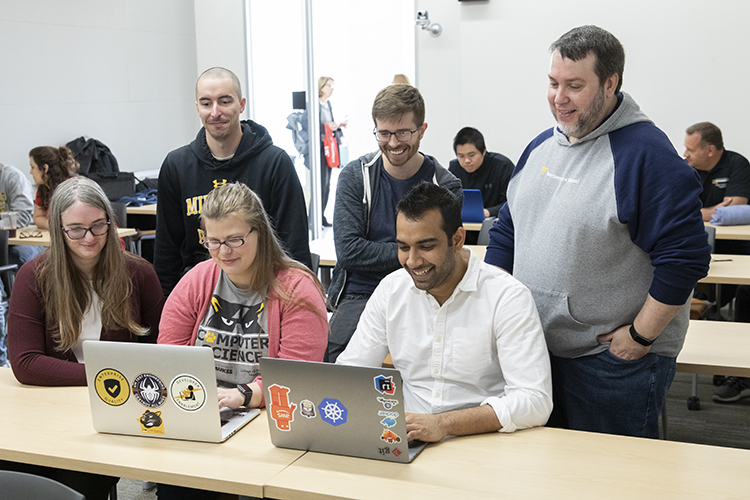 UWM computer science students and Northwestern Mutual are teaming up on a project that benefits both.

For the past year, professionals at the Milwaukee-based insurance and financial products company have been mentoring seniors in computer science as they work on a capstone project.

The partnership grew out of an idea Mukul Goyal, associate professor of computer science, had when he started teaching the senior capstone class two years ago.

“I wanted to involve local industry in mentoring our capstone project,” said Goyal. “Like most universities, we are essentially focused on fundamentals, not the specific technologies used in most industries to write programs and test them.” At the same time, with new technologies evolving so quickly, industries were having a hard time finding people with the exact skill set they needed, he added.

He contacted a number of local industries, and Northwestern Mutual responded.

After touring UWM and meeting with Goyal and Ethan Munson, professor of computer science and associate dean of the College of Engineering & Applied Science, the partnership was established. Jay Walters, director of enterprise quality-developer enablement at Northwestern Mutual, agreed to lead the company’s part of the effort. He and the company realized, he said, that this was a good opportunity to fill a need for the company as well as to help students.

“l have been passionate about developing engineering talent for many years,” Walters said. “For quite some time, I had been contemplating how organizations could empower individuals to be highly effective day one contributors, becoming effective employees very quickly.”

Through the capstone project partnership, students got the experience of working hands-on with actual company technology suites.

“They gave us a full list of all the different technologies we were going to be using and the documentation for each one,” said Catelyn Scholl, one of the students who took part in the spring semester project. “Technology is always expanding and always changing. Something like this is really important to keep up with the latest changes.” Scholl had been interning at Northwestern Mutual, and accepted a full-time position as a software engineer after graduating in May.

Work on an app

During the spring 2019 semester, eight students in the partnership capstone project worked on an app that could be used to streamline judging in the College of Engineering & Applied Science’s annual research poster competition. With hundreds of students and judges involved, the scoring had to be done by hand, which was time consuming and prone to error.

“The project, even for eight people, was pretty big to take on,” said Scholl. “It was definitely a learning curve for all of us to overcome. We had to plan everything from start to finish.”

Northwestern Mutual’s team gave the students access to the real-world technology they needed, which was a challenge. “Putting together all the technologies and infrastructure in a way that was completely disconnected from Northwestern Mutual systems, but also provided everything the students needed on day one, was a monumental undertaking,” said Walters.

At the time, Walters and his staff were based in New York, but he came to Milwaukee to meet with the students at the start of the project. “We had the opportunity to bring them onsite and meet them in person to onboard them into the project.”

The students and professionals also went to the Northwestern Mutual team’s favorite Indian restaurant in Milwaukee.

“We were able to introduce them to some cuisine that they had not previously enjoyed. It’s been a great professional and personal experience as we’ve gotten to socialize and interact with the student participants and watch them grow over the course of the 12-plus-week program,” Walters said.

As they worked on the project, the students communicated with their mentors online via Slack and email.

“I really enjoyed the process,” said Mingren Xiang, a member of the spring team who graduated in May and is continuing his graduate education at UWM. “Our mentors were very professional and helpful. They gave us lots of advice on how to be a professional programmer.”

He found the project helpful in a number of ways, above and beyond learning new technology.

“I learned how to develop a full stack software and deliver a usable product on time, how to follow best programming practice and write industry-level code. More importantly, I learned how to communicate efficiently between team members and the project manager.”

In addition to teamwork, the students developed their abilities to work with clients, Scholl said.

That’s an important skill these days, Walters said. “The days of programmers writing code without high levels of collaboration with not only their peers, but also their business partners are fading rapidly,” he said.

While the final product for the spring team didn’t work perfectly, both Xiang and Scholl felt the end result was one of the best parts of the project. “One of the really cool things was being able to see our application working at the competition live,“ said Scholl.

“The other thing that was really cool was Northwestern Mutual invited us to come and give a presentation at the end on our app and the challenges and how we overcome them,” she added. “That was definitely a highlight of the whole experience.”

With the 10 students in the fall project, the capstone partnership is definitely continuing, said Walters, who is now based in Milwaukee.

Said Walters: “I believe this is an immersive, real-world opportunity not only for Northwestern Mutual to give back to the community, but for us to contribute to making Milwaukee a city with a strong technology and high software quality culture.”