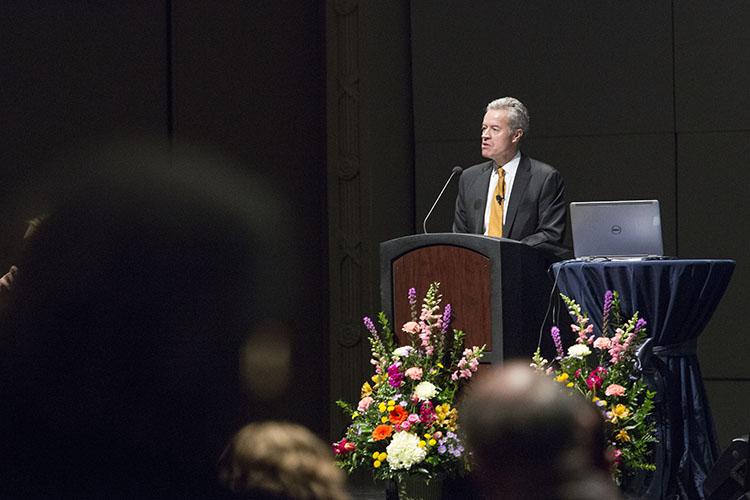 UWM is making progress on its strategic opportunities roadmap and tackling head-on the challenge of the black/white achievement gap, Chancellor Mark Mone said Thursday during his spring plenary address.

In addition, Mone kicked off a yearlong focus on the university’s guiding values, which include diversity, ethical behavior, and innovation, leadership and collaboration.

As an example of the efforts to build an outstanding learning environment, Mone discussed the Connected System Institute, being developed at UWM in partnership with Rockwell Automation. This multidisciplinary effort will focus on the “industrial internet of things,” which uses sensors to gather data from equipment, machines, and manufactured products through secure data networks.

UWM needs to help prepare students for the workplace and help businesses improve their processes, Mone said. “Increasingly, employers are saying connectivity is where it’s at,” he said.

And with Wisconsin facing a shortage of skilled workers as the fourth industrial revolution approaches, it is important that UWM helps prepare students for this new world, Mone said. Projections suggest that the state will be short 88,000 workers, without even factoring in the impact of Foxconn and its suppliers on the job market.

A partnership with other UW System schools in preparing students for careers in freshwater sciences, led by UWM, is part of an effort to capitalize on one of the state’s strengths.

“We have a unique opportunity to collaborate across systems, with UWM leading the way,” he said.

UWM’s collaboration with businesses and other organizations in southeastern Wisconsin through the M7 talent pipeline program also help with job creation efforts.

Overcoming the black-white achievement gap is another critical factor in carrying out the university’s strategic values, Mone said. Wisconsin has the dubious distinction of being No. 1 in the graduation gap between black and white students. Mone mentioned a recent Milwaukee Journal Sentinel story highlighting the problem and noted that story shined a positive light on UWM’s efforts to narrow this gap.

The university has made remarkable strides in improving math and English programs to eliminate stumbling blocks that some students face in progressing to graduation. Summer bridge programs have brought younger students to campus to get a head start on education – participation increased by 25 percent in 2017. The changes are having an impact, with a 6 percent increase in the number of black male students continuing on after their first and second year, according to the chancellor.

The achievement gap, in particular is “one of our most important challenges,” the chancellor said. “Let me be clear when I say that closing the achievement gap has impact far beyond our walls – it is critical for lifting the fortunes of a segregated Milwaukee and contributing to Wisconsin’s workforce.”

UWM’s role in the M3 partnership is a critical part of that effort. M3 brings together UWM, MATC and the Milwaukee Public Schools in an attempt to build a better pipeline of education to create greater success for students.

The university has a number of new opportunities over the next month. One is the new partnership with UW-Waukesha and UW-Washington County, which starts July 1, though full assimilation will take longer. “I think the success of this is critical to the success of this region,” Mone said.

The university will also face challenges as metrics and outcomes measures are being instituted as part of the state budgeting process. Much of the focus will be on enrolling Wisconsin high school graduates, improving graduation and retention rates, increasing degrees in the health and STEM fields and decreasing student loan debt, all of which are part of the measures.

Mone noted several other positive developments, including compensation and the capital budget.

“We have turned the corner and are currently implementing one of the more encouraging state budgets we’ve seen in a very long time,” he said.

Employees will benefit from two separate wage adjustments of 4.04 percent, with part coming in July 2018 and the rest in January 2019. The increases, subject to approval by the Legislature’s Joint Committee on Employment Relations, will be based on merit, so individual increases will vary.

In addition, a one-time faculty retention supplement of up to $1.5 million is being allocated to university efforts to retain and support talented faculty.

The “Made in Milwaukee – Shaping the World” campaign, launched in the fall, has raised more than $184.6 million of its $200 million goal so far, the chancellor noted, with funds going toward the three priorities of student success, research excellence and community engagement.

A sampling of other positive highlights included an uptick in favorable media messages over the past three quarters, the recruiting/assistance trip to Puerto Rico and the upcoming groundbreaking for the new Lubar Center for Entrepreneurship. The chancellor also mentioned the visit of Oprah Winfrey to her half-sister’s graduation in December, and Winfrey’s positive reaction to UWM’s well-organized ceremony and the university’s diversity.

Overall, the chancellor concluded, “We are turning the corner. We are not out of the woods yet.” But, he added, “We know what matters. We make a difference in the lives of so many individuals every day.”