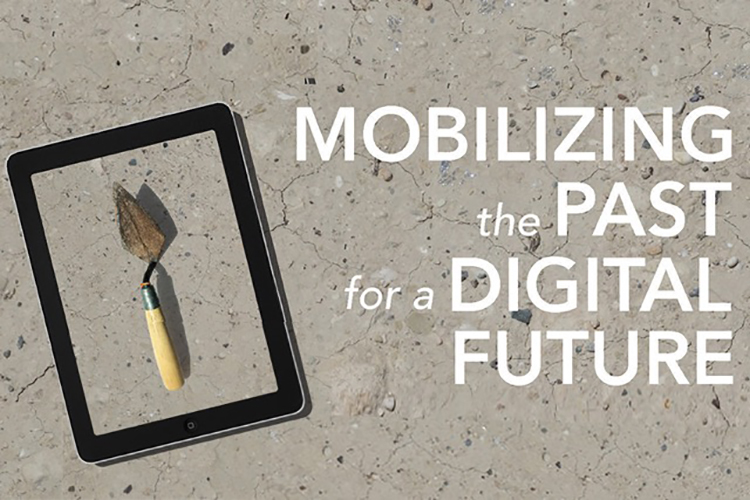 Erin Walcek Averett, Jody Michael Gordon, Derek B. Counts, eds. Mobilizing the Past for a Digital Future: The Potential of Digital Archaeology Grand Forks, N.D.: The Digital Press at the University of North Dakota, 2016.

Though it seems jarring at first, archaeology, as other sciences, has adopted the tools of the digital age. This digitally published volume grew out of a conference that convened many of the leading practitioners of digital archaeology in the U.S., many of whom contributed to the book. Derek B. Counts, University of Wisconsin-Milwaukee professor of art history, edited the book along with Erin W. Averett (Creighton University) and Jody M. Gordon (Wentworth Institute of Technology). In this excerpt, Adam Rabinowitz of the University of Texas at Austin writes about the roles of humans and technology.

Computers are better than humans at carrying out mathematical operations, a facility that extends to the organization and retrieval of digital data. Electronic and digital sensors are better than humans at perceiving and recording many of the qualities of the physical environment, especially when it comes to measurement. Since the measurement, recording, and organization of data are the primary goals of the process of archaeological documentation, why not turn this over to computers? What do humans have to offer to this process?

The answer to this question lies in the distinction between data, information, and interpretation. Machines can collect data, and they can begin to integrate them into the contextual systems that we think of as information, but they cannot perform the leap of informed imagination that enables the human archaeologist to propose explanations for why and how a stratigraphic deposit was formed, and they cannot (yet) tell the stories that archaeologists must create to explain the history of a site. Since, however, both the imaginative leap and the resulting story are a result of a close physical engagement with the material remains, and since they are both part of a process that involves a human being creating information at the trowel’s edge and then altering and transforming it for representation to other human beings, it is worth asking how the out-sourcing of some of the components of documentation to digital tools will affect the information we produce and the stories we tell. Here we arrive at the second manifesto: Huggett’s 2015 essay.

Like Hodder’s calls for a reflexive archaeology (Hodder 1997, 2003), Huggett’s article asks us to think more critically about the interaction between our tools, our practices, and the knowledge that we seek to create: to develop “a form of introspective or more self-aware Digital Archaeology, one which consciously seeks to understand the under- lying processes and behaviors that sit behind the tools, technologies, and methodologies applied” (Huggett 2015: 89). Hodder and his collaborators are currently concerned with some of the same issues, but their emphasis on the advantages of digital recording for the preservation of multivocality and the democratization of process takes a distinctly more celebratory tone (Berggren et al. 2015). Huggett, by contrast, argues that we should be aware not only of the doors digital technology can open, but of the other doors it closes.

Huggett’s essay deserves to be read in its entirety, but I want to highlight here two recurrent themes: distance and categorization. As with the “distant reading” I performed on this volume at the beginning of this response, digital tools give us the ability to take an ever-more-distant vantage point from which to observe archaeological remains, from the perspective of a satellite to a 3D model of stratigraphic deposits viewed on a monitor in the lab. Huggett suggests that this perspective, while giving us greater access to information, also decreases the intimacy of our engagement with the object of our study. Moreover, “distant reading” approaches in literature reduce texts to pre-defined component parts, sense-units consisting usually of single words—but not all words, as some are excluded a priori as too frequent to be relevant. Database-driven digital recording systems, both spatial and textual, perform similar operations: they define in advance what sorts of data and information are relevant and how they should be described, limiting space to coordinates and vectors and attributes to defined values. Uncertainty, fuzzy boundaries, and uncategorizable features can be lost in the process (Huggett 2015: 90–93).

These are theoretical issues that one can explore in the field through systematic user-testing and comparative study, and indeed, many of the contributors to this volume have done so.12 But there is a related area that might require less impressionistic investigation: the cognitive science of embodied human-computer interaction, specifically as it relates to touch and input devices. A growing body of scientific literature focuses on haptics, or the physical engagement of a human hand with a tool or device, and in particular on the different ways in which we process information when dealing with different writing tools (Mangen and Velay 2010, 2012). Most of this work has focused on the cognitive effects of handwriting, either as it is connected to the engagement of multiple centers of the brain in the process of learning to read and write (James and Atwood 2009; Longcamp et al. 2011; James and Engelhardt 2012; Kiefer et al. 2015), or as it is involved in the brain’s ability to process and retain information through note-taking (Mueller and Oppenheimer 2014). The frame that researchers in this field have applied to the interaction between brain and hand(s) in writing is “embodied cognition” (Mangen and Velay 2012: 406), a theoretical concept that has already been used in the interpretation of past material culture (cf. Piquette and Whitehouse 2013), but which we have only just begun to apply to ourselves (Olsson 2016; Wright and Morgan, forthcoming). We should: not only do functional magnetic resonance imaging (fMRI) results from the studies mentioned above suggest that the input mechanism we use affects our processing of the information we input, but a few references in the recent medical literature on strokes suggest that engagement with text input on mobile devices uses a different part of the brain from that which otherwise processes language (Kaskar et al. 2013; Ravi et al. 2013; Hadidi et al. 2014). The time we gain through the use of touch-screen input devices may mask deeper sacrifices in our cognitive engagement with our objects of inquiry.

Huggett’s idea of digital distancing and Caraher’s connection of digital platforms with de-skilling reflect observable changes in practice. In our project at Chersonesos, this was most evident in the perception of scale and relevance: instead of ignoring tiny pebbles that cannot be represented in a 1:20 pencil-drawn plan, team members digitizing context plans from orthorectified photographs in ArcGIS tended to zoom in to vectorize all of them, without making a conscious decision about whether it was actually useful to preserve the position of those pebbles (Rabinowitz et al. 2007: 251). The effects (or lack of effects) of new input mechanisms on our cognitive processes, however, are invisible to us unless we look for them. Since we cannot discuss cognitive changes on a practical or theoretical level until we have actually investigated them, our reflective manifesto should spur us to do so. This is all the more true because we are the consumers, not the creators, of these new mechanisms, and thus we lack the benefit of insights acquired during the design and user-testing process that produced the digital tools we are adopting.

Excerpt from Rabinowitz, Adam. “Response: Mobilizing (Ourselves) for a Critical Digital Archaeology.” In Mobilizing the Past for a Digital Future: The Potential of Digital Archaeology, edited by Erin Walcek Averett, Jody Michael Gordon, and Derek B. Counts, 493-518. Grand Forks, ND: The Digital Press at the University of North Dakota, 2016 (http://dc.uwm.edu/arthist_mobilizingthepast/21/)