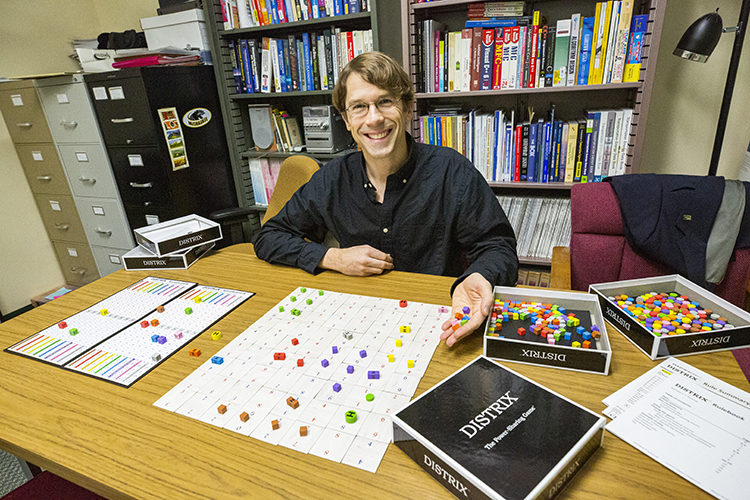 Matthew Petering, associate professor in the College of Engineering & Applied Science, has created a board game and puzzle book that explore the problem of gerrymandering. (UWM Photo/Troye Fox)

Board games and puzzles can be an escape from reality. But Matthew Petering, associate professor in the College of Engineering & Applied Science, says his new board game and puzzle book DISTRIX are different. Both are based on the real-world problem of gerrymandering.

Gerrymandering is the process of dividing states into election districts so that one political party has an unfair advantage in elections. State legislatures or commissions redraw election districts every 10 years after the census to account for population changes.

Gerrymandering is a common practice in states across the U.S., including Wisconsin, Petering said. Gerrymandered districts are sometimes identified by their awkward shapes.

“I’ve spent most of my career teaching students how to make industrial systems more productive and efficient,” Petering said. “That’s been rewarding, and I enjoy it very much. But what about our political system? Many people now believe that our political system is inefficient. In other words, it’s not very representative, and gerrymandering is one of the reasons.”

Through gerrymandering, Petering said, a political party with 50% voter support can almost guarantee itself a huge majority in the state legislature come election time. For example, a party in power can pass a law creating election districts that corral voters from the opposing political party into as few districts as possible. The opposing party will win those few districts by wide margins, but the party in power will win many more districts, each by a narrow margin, because its voters are better distributed among the districts.  A party in power can also receive a minority of votes but still win a large majority of legislative seats.

Petering wanted to give people a firsthand experience of gerrymandering through the DISTRIX board game and puzzle book.

“The puzzle book shows the seriousness of the gerrymandering problem, and the board game offers a game-based solution to this problem,” he said.

The game involves two players, Red and Blue. Each square on the 6×6 game board represents a community, and the number of voters for each party in each community is shown. During the game, players use colored tokens to assign communities to political districts one community at a time. Players may also reassign communities from large districts to adjacent, smaller districts to better equalize the district sizes. The game ends when nine districts are fully formed and there are no moves remaining. The winner is the player who controls more districts.  The idea is to create districts in which your voters are spread thin enough to secure the most districts, but not so thin that your opponent gains more districts than you.

The game, Petering said, is one of skill and strategy. Similar to chess and go, players must look ahead multiple moves to anticipate what the board will look like. DISTRIX, however, is not as abstract as those strategy games, he said.

“The game has real-world relevance,” he said.

Similar to the game, the puzzle book asks readers to form nine election districts in fictional 6×6 states. The 90 puzzles in the book are organized into 30 trios. Each puzzle trio asks readers to draw election districts for a fictional 50-50 swing state that are: gerrymandered in favor of Party A, gerrymandered in favor of Party B, or balanced and fair. Surprisingly, in nearly every puzzle trio, it is possible to gerrymander the map so that either Party A or Party B wins more than 75% of the districts.

“The puzzle book shows that you can take the same state map and, depending on your goal, you can draw districts to achieve any outcome you want,” Petering said.

Beyond games and puzzles

The DISTRIX board game won a silver medal at the 2020 Serious Play Conference, which recognizes games that serve an educational or training purpose. But before Petering had the idea to educate people about gerrymandering through a board game, he  started developing software to create fair election districts for any U.S. state.

The software, now functional, automatically creates random sets of legally acceptable and politically fair legislative districts for any U.S. state. Whereas the puzzle book and board game are largely fictional and meant for educational and recreational purposes, the software has the potential to affect real people, Petering said.

“It’s important to create maps that are politically fair and assure fair representation of all voters,” he said.

The game and puzzle book are available on the DISTRIX website.