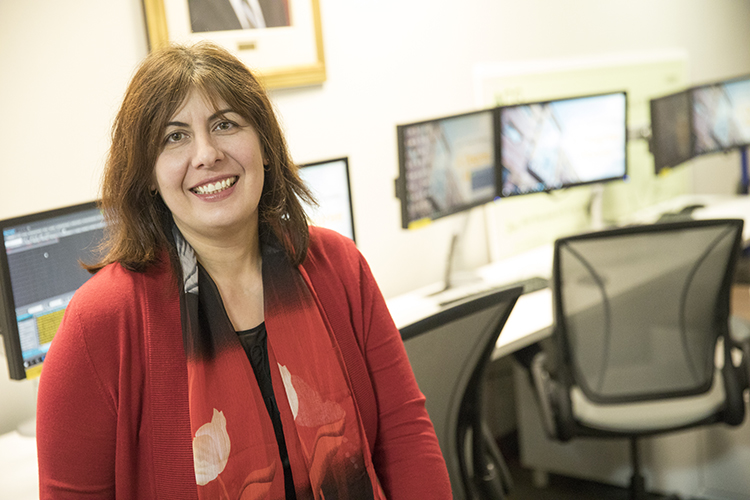 “The only thing separating women of color from anyone else is the lack of opportunity,” Davis said.

Goranova is an associate professor at the Lubar School of Business with an expertise in corporate governance. Her research analyzes the management and guidance provided by boards of directors and shareholder activism.

“I thought, let me take a look,” Goranova said. “And I took a look, and I was surprised. I expected to see progress.”

In 2017, women occupied just 22 percent of seats on the boards of the companies in the S&P 500 index. With boards averaging 11 people, many times there are just one or two women in the room.

“Women are just above token status on the boards,” Goranova said.

And it’s even worse for minority women. Of the 5,406 board seats on the S&P 500, women of color occupied just 3.3 percent: African-American women held 120, Asian-American women 50 and Latina/Hispanic women 31.

And, Goranova says, S&P 500 boards are generally more diverse than the boards of midsize and small companies.

That’s a problem, Goranova said, in a country that is becoming more racially diverse. According to the Pew Research Center, by 2050 no race in America will represent as much as 50 percent of the population.

The purpose of a board of directors is to provide oversight of a business, set the tone at the top and manage executive succession. Bringing diverse perspectives is thus critical. Board members are elected to their position by shareholders in the business.

Goranova argues there are a multitude of factors that explain why trends for minority female directors have not kept up with progress made in education: from double-edge bias against women of color and lack of women CEOs and female executives in high-paid positions, to the even larger wealth and wage gap faced by minority females.

Lubar and other MBA programs are attracting greater numbers of women than previously, but researchers still find a wage gap for MBA graduates, Goranova said.

“Educational progress has been made, but possibly not into the high-paying positions,” she said.

California is attempting to address the representation issue with a new state law that requires the boards of every publicly listed company with its headquarters in the state must include at least one woman by the end of 2019. By 2021, that requirement rises to three women for boards of six or more people.

At that point, women’s influence would reach what Goranova calls “critical mass,” where their voices would carry enough weight to influence the boards’ direction. This requirement, however, does not address the challenges and issues of tokenism faced by minority women.