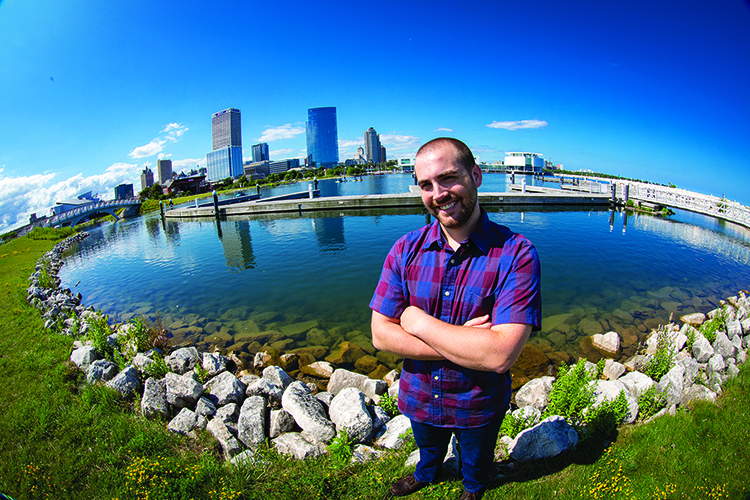 “It’s not just urban sheet-pile walls and dredged canals,” Brennan Dow says about Milwaukee’s lower estuary. “There’s a whole world happening next to you that you don’t know about.” (UWM Photo/Troye Fox)

Dotted with industry, Milwaukee’s concrete shoreline appears more hospitable to commercial vessels, pleasure boats and patio dining than to fish and wildlife. But just below the water’s glassy surface, pockets of habitats teem with aquatic life.

“It’s not just urban sheet-pile walls and dredged canals,” says Brennan Dow, the Milwaukee Estuary Area of Concern coordinator at the Wisconsin Department of Natural Resources. “There’s a whole world happening next to you that you don’t know about.”

While a master’s student at UWM’s School of Freshwater Sciences, Dow worked with Professor John Janssen on an extensive mapping project to make that underwater world visible. Supported by the Fund for Lake Michigan and the DNR, Dow mapped 42 miles of Milwaukee’s lower estuary, where Lake Michigan meets the city’s waterways.

He boated up and down the rivers, canals and lakeshore “like a lawnmower,” and he used sonar to collect information on the waterbed’s depth and composition. This information helped him identify likely locations for fish habitats. He then sought those habitats out, donned diving gear and went underwater for a closer look at what lived beneath. “I found bass, bluegills and other little baby fish,” he says.

These biological hotspots were isolated from each other, limiting their viability. Dow created a massive spreadsheet cataloging each location with suggestions of how to connect and enhance them. Since wrapping up his research, Dow has been able to put this into practice and scaled it to address the entire Milwaukee area through his role with the DNR.

Since starting the job in May 2019, Dow has ferried his list of projects – along with those of other researchers and organizations working on water quality and habitat restoration – through a rigorous vetting process. This final list will be provided to the Environmental Protection Agency.

“Milwaukee is never going to be like Door County, with amazing nature and tons of wildlife,” he explains. “Instead, we want to get to a place where we have a successful, sustaining population in an urban setting.”

Meanwhile, his technical map is getting a makeover from Kim Beckmann, a Peck School of the Arts associate professor. Beckmann is working with Janssen to translate the data Dow collected into accessible maps and signage for area parks. “Her work will bridge the gap between the science and the public,” Dow says.

He looks forward to a time when visitors to the Milwaukee shoreline can see the area as a living, dynamic ecosystem. “It’s important to show people that, even though there is industry and sewage overflow, there is a big push to clean up Milwaukee,” Dow says. “And yes, there really are fish out there.”