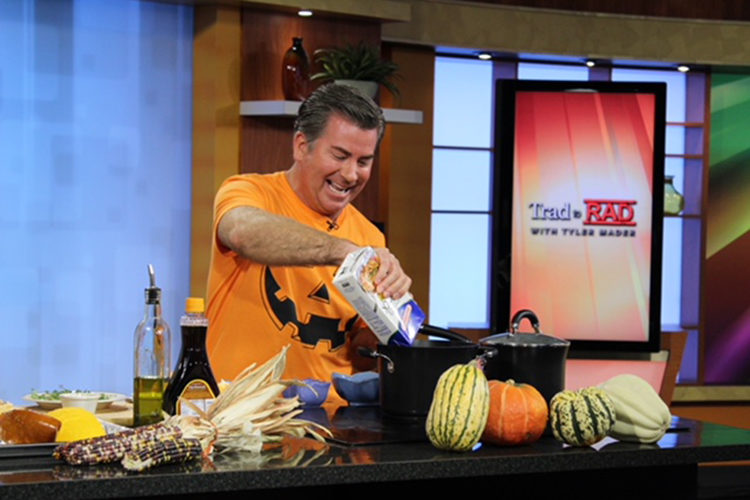 Tyler Mader first brought his “Trad to Rad” cooking show to the producers of “The Morning Blend,” and now he appears on TV stations across the country. (Photo courtesy of Tyler Mader)

“It’s something that’s very special to me. My parents divorced when I was very young. The memories I had were my mom, my brother and I, sitting down by the fireplace, and we would have grilled cheese and tomato soup every Sunday,” he recalled.

So, he re-created the dish, with a twist – a sandwich called “10,000 Leagues Under the Cheese” that he shared with all of Milwaukee on the WTMJ-TV show “The Morning Blend.”

Mader is the host of “Trad to Rad with Tyler Mader,” a mini-cooking show segment that travels the country, having appeared on stations from New York to Florida to Wisconsin. The concept is simple: Mader takes traditional favorites – like grilled cheese, ribs, bratwurst and mousse – and adds a radical twist to punch up the dish.

“You can probably think back to one meal right now, and you can picture who was there. You can smell the food and the environment,” he said. “That’s what the ‘traditional’ part of Trad to Rad is all about. It’s about sharing those memories that you had as a child and tweaking them to fit today’s active lifestyle.”

A heritage of cooking

Food has always been an important part of Mader’s life. If you don’t know him from his television appearances, you might know his family name: He’s part of the Mader family of Mader’s Restaurant fame. The establishment has been serving German cuisine in Milwaukee for over 100 years.

Mader spent his childhood inside the family business, but he spent his college years at UW-Milwaukee. He transferred to the university after a year at Carthage College, looking for a bigger school and more opportunities to study another love of his: communication. He relished public speaking and especially enjoyed his classes with Nancy Burrell, now a professor emerita.

After graduating in 1996, Mader did a stint at Westmoor Country Club in Brookfield, working with a family friend to gain more experience in the restaurant industry. Then, when it came time to further his education, he jumped from the Midwest to Napa Valley in California to attend the Culinary Institute of America.

The school serves chefs and restauranteurs, who can take classes in everything from European wines to plating desserts to making soups to restaurant operations and layout. Mader dove in, relishing the opportunity to not only hone his industry skills but to experience Napa Valley’s world-class dining.

One of those Napa Valley restaurants was Tra Vigne, co-owned by celebrity chef Michael Chiarello, who had his own show on PBS and appeared on The Food Network. After completing courses at the Culinary Institute of America, Mader signed on as a manager at Chiarello’s restaurant, where he learned about the heart of fine dining.

“I absolutely fell in love with what I call ‘The Experience,’ which is very difficult to find in the restaurant industry. It consists of so much more than just the food,” he said. “It’s the direct eye contact and shaking someone’s hand when they walk through the door. It is the way you walk them to the table. It’s the etiquette of pulling out the chair and addressing everybody once they’ve been seated with menus. It’s the timing between dishes.

“It’s those details that are so significant to the overall experience, that I learned by being a part of running a restaurant in one of the premier locations in the world.”

He took that knowledge with him back to Milwaukee in 1999 when he returned to Mader’s Restaurant. Mader worked to revamp the menu by adding wine and beer pairings, and trained staff to deliver “The Experience” to guests, among other changes. But, Mader acknowledges, working with family can be tricky. His uncle, who owns the restaurant, disagreed with some of the changes. Mader soon parted ways and joined the Bartolotta Restaurant group to run one of their properties instead.

Even though he loved his job, the restaurant industry runs on a late schedule with long hours. Feeling burned out and wanting to spend time with his family, Mader eventually moved to Georgia and took a job in health care sales.

But something was missing.

“I’ll never forget sitting at my desk, looking out the window, thinking, what can I do? I love people; I love food; I love sharing and creating an experience,” Mader said. “I thought, you know what? I’m going to try and create a brand and come up with something where I can showcase my experience and my talents.”

And so “Trad to Rad” was born. Mader met with a Wisconsin-based public relations company and worked to build the concept of the show. He pitched the idea to the TMJ4 producers, who agreed to give him a trial run on “The Morning Blend.” If he was successful, they said, they would invite him back.

He made his Radical Root Beer Ribs. He got invited back.

Mader’s been doing “Trad to Rad” ever since. The show combines his culinary expertise and his UWM degree.

“To be able to interact with people, to be on camera, and to be able to share some of my background experiences since I was growing up, and my love for food and cooking, is the absolute perfect marriage (of my education), and I’ve never been so passionate and excited about something in my life,” Mader said.

That’s not to say there aren’t challenges. Putting together a two-and-a-half-minute segment takes two to three weeks of preparation. Mader has to lay out his ingredients and memorize their order, then cook a dish, show off a finished product, and entertain the audience with a story all at the same time. It’s nerve-wracking, but he’s delighted that his show has helped making cooking more accessible to Milwaukeeans.

For everything else nerve-wracking in his life, Mader turns to his faith. “It’s a very important part of my life,” he said. “It will be part of every decision I make moving forward and it’s something that has provided incredible stability for me.”

Mader is embarking on a new project. The first episode of “The Mader Menu” aired Jan. 8, the beginning of a monthly feature in which he’ll review Milwaukee restaurants. “But it’s not just about food,” he said. “It’s about delivering the experience that people don’t realize is critical to a memorable meal.”

Whether that meal is a five-star dish or a grilled cheese sandwich by the fire, Mader is sure it will deliver memories that make us smile.