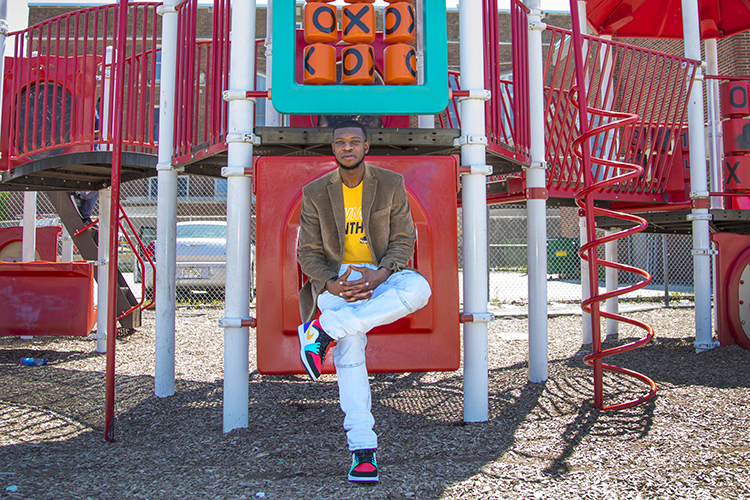 Schuyler Ramsey is planning a neighborhood cleanup and block party Sept. 21 in the area around Benjamin Franklin School on Milwaukee’s north side. It’s the second year he’s planned the event. (UWM Photo/Pete Amland)

Schuyler Ramsey, who earned his bachelor’s degree in community engagement and education from UWM, is taking what he learned in the classroom back to his neighborhood.

For the second straight year, Ramsey, 28, who is starting on a master’s degree in community education this fall, is organizing a neighborhood cleanup and block party Sept. 21 in the area around Benjamin Franklin School on West Nash Street on Milwaukee’s north side.

“My goal is to bring what I learn back to my community,” said Ramsey, who works part-time in UWM’s TRIO & Pre-College programs office. Through that office, he’s been able to go to a number of conferences, including a 2018 national service learning conference.

Last year, when he was first inspired to do a neighborhood project, he asked people in the area what issues they would like to see addressed. In the 53206 ZIP code, there were many, including reckless driving, drugs and poverty.

Ramsey decided to start with something focused and doable. “I had a few issues to choose from, but I kind of wanted to start small, and that’s where the community cleanup idea came from.”

Drawing on what he’d learned in his UWM community education classes about organizing, he went door to door around West Capitol Drive, North 27th Street and West Keefe Avenue telling people about the project and inviting them to join in.

“As I introduced myself and gave further insight on what I was planning to do, I quickly gained a new level of respect for this strategy I’d learned at school,” he said.

He also promoted the event on social media and through local news media – even knocking on the door of WNOV radio station at 20thand Capitol during his door-to-door campaign.

The 2018 “Sweep the Streets” community cleanup and block party attracted several hundred mostly local residents, who worked with volunteers from MPS and others to fill a dumpster full of trash. A few sponsors donated toward food and refreshments for the block party, held near Benjamin Franklin School,  2308 W. Nash St.  Games and activities, a DJ and a dance contest encouraged neighbors to get to know each other. Community leaders spoke to the gathering about peacemaking and building a stronger community.

A bigger event this year

This year, with backing from BLOC (Black Leaders Organizing for Change), the event will expand and continue, with a theme of mental health. In addition to fun, games and yoga, the event will feature community organizations with booths and representatives available to let people know what resources are available to them. Ramsey will be passing out sheets with a list of contacts for jobs organizations and city agencies. And, as at last year’s event, voting information will also be available.

“I named it a cleanup and block party,” said Ramsey. “However, I definitely want to educate the community. I kind of like catching them by surprise with all the educational stuff.”

Before he came to UWM, Ramsey’s original career goal was to become firefighter. He earned his associate degree from MATC in firefighting, but when he finished, the fire department wasn’t hiring. He decided while he was waiting for an opening, he would earn a degree in community education as another way of helping people.

The UWM campus was already familiar. “I went to Riverside University High School and had gone to TRIO & Pre-College programs, so I knew the campus like the back of my hand.”

April Holland, executive director of the TRIO & Pre-College programs where Ramsey has worked as an administrative program assistant for five years in the Future Success program, describes him as a “phenomenal asset” to the program.

“Schuyler inspires each of us daily through his words of encouragement and positive attitude. He displays a strong belief that education is important, an education is priceless, and demonstrates daily for our students that no matter what the obstacles we encounter each day, an education is your key to living a successful life.”

Ramsey sees the block party and cleanup as a way of challenging the perception that people in the neighborhood don’t care about their community.

Agnes Williams, a senior lecturer in Educational Policy and Community Studies, was Ramsey’s advisor during some of his undergraduate years and stays in touch with him.

“For the past five years,  Schuyler Ramsey has shared not only his passion of  becoming a community change agent, but also his actual community engagement activities (rehabbing urban houses, church involvements) to improve the living conditions of urban residents,” she said.  “Schuyler believes that community organizing allows residents to reclaim their living spaces and produce positive change.”

After last year’s event, he’s already seeing changes, Ramsey said. Some of the young men who used to just hang out around the neighborhood helped with the cleanup and pitched in for the block party. A few of them, (inspired by his example, he hopes) have gone back to school.

Ramsey knows the value of education. He chose the date for this year’s event because it is his own little brother’s birthday. Stephan, who died two years ago,  was the one who encouraged Ramsey to continue his education.  Another inspiration, he said, was Jacarrie Carr, a student in community education who founded Jacarrie’s Kicks for Kids while still an undergraduate.

Ramsey grew up in the neighborhood and still lives there. While the media focuses on poverty and crime, he sees hope. “Growing up in 53206 psyched me in a way because you see the good and the bad. I definitely know what’s going on….it doesn’t shock me. It makes me more eager to help make improvements. A lot of people want to move away, but I love it here. My goal is one little thing at a time.”

Ramsey has just started a tutoring and mentoring business, is thinking about organizing a forensics club, and eventually plans to go into politics. He’s encouraging the young people he knows to get involved and vote. “I’m young and I’m still learning, but I know I can make change.”