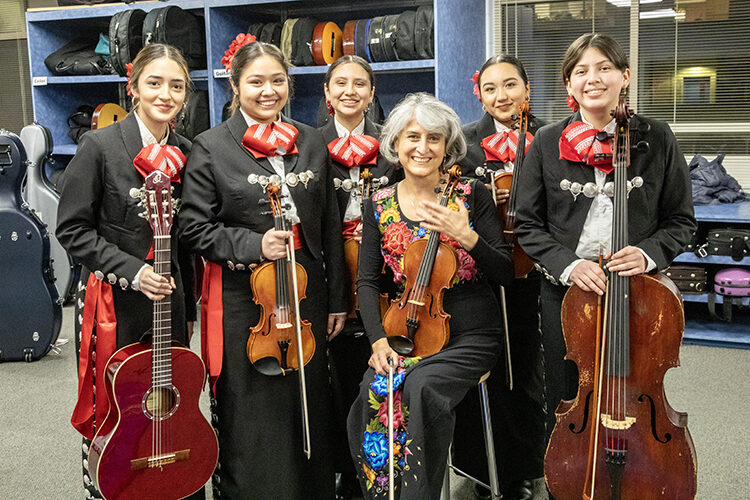 A seed planted by a Texas music teacher several generations ago is still bearing fruit on the south side of Milwaukee.

“My first teacher was Mr. James Angerstein, who is still alive today. I tell my students he is your musical grandfather. He was the kind of teacher who became a father figure, a mentor …. I have infinite gratitude for the man and for the system that gave us that possibility.”

Those are the words of Dinorah Márquez Abadiano, a UWM alumna who is founder and director of the Latino Arts Strings Program and has taught hundreds of students in her 20 years with the organization.

She recently received a Betty Award from Milwaukee Magazine, was chosen for the Wisconsin Arts Board and selected to receive a UWM Alumni Association Distinguished Alumni Achievement Award.

Márquez Abadiano and her family arrived in the United States from Mexico when she was a child, very shy and not speaking a word of English. Texas, where they lived at the time, had strong music programs and wonderful instructors, she recalls. Music was life-changing and lifesaving for her and her brother, she said.

“He began his music career when we moved to the United States. He is also a musician to this day.”

Being raised in a family that had difficulties, “the musical activity for both of us was a haven,” Márquez Abadiano said. “At home it gave us peace because we could practice, and at school it gave us a voice. The violin really gave me a way to express myself.”

She decided to start the music program at Latino Arts through the United Community Center because, “I felt I could give back what I received as a child … the lifesaving possibility of playing music.”

When she first started, almost 95% of the students at UCC qualified for free or reduced lunch, so music lessons and musical instruments were usually not in families’ budgets. “I was an immigrant child, and this is a majority immigrant community. I identify with that.”

Coming to UWM, where she earned her master’s degree in viola and chamber music and string pedagogy, was one of many blessings in her life, she said. She was playing in an orchestra and performing chamber music in Mexico when Wolfgang Laufer, a member of UWM’s Fine Arts Quartet, came to her town to give workshops. Since she was with the university there and spoke English, she became his host during the stay.

‘An amazing opportunity’ at UWM

After discussing places where she might audition for a master’s program, he eventually offered her a teaching assistantship in UWM’s Institute of Chamber Music. “That was an amazing opportunity. When I arrived, there were a lot of students coming from Latin America to work with the Fine Arts Quartet. It was a very rich cultural time for all of us who were there.” Márquez Abadiano graduated from UWM in 2001.

A stress injury to her hand led to another “unexpected blessing” in disguise, she said. When her performing was limited, she turned to the pedagogy program to prepare for teaching. That led to work with the String Academy of Wisconsin, now the UWM String Academy.

Wanting to set up a similar program for Latinx children on Milwaukee’s south side, Márquez Abadiano formed Latino Arts Strings in 2002.

“I wanted to establish a program that focused on cultural heritage education through music, while carrying similar pedagogical approaches to what the UWM String Academy does, including private lessons and small group classes. We also offer orchestra and mariachi ensemble training, and loan instruments to all our students because we work within a community that can’t really afford those things.

“But, given the situation of the arts, I just didn’t know what to expect in terms of funding for this program, so I thought, well, let’s do this for five years, maybe eight years. I’ll see my first-graders graduate eighth grade.”

The program has grown from 26 students to more than 200 yearly participants, with 10 teachers. She remains grateful to Latino Arts Inc. and the United Community Center, which have continued to provide funding and support through the years, and for the team of teachers she works with.

“Latino Arts, UCC, the boards of both agencies, view the LASP to have the value that it has and have worked hard to support us for 20 years,” Márquez Abadiano said.

Márquez Abadiano sees the program as a way of celebrating the diverse heritages of many Latinx countries.

That’s important not just for Latinx children, but for children of all cultures – Hmong, African American and others, she adds.  She tries to share that philosophy with the children.

‘It’s wonderful to be in Milwaukee because so many people, so many great musicians and musical heritages, are being expressed in our community,” Márquez Abadiano said.

A recent performance Márquez Abadiano admired was “Hip Hop DNA,” directed by Kiran Vedula, which traces the cultural roots of hip-hop through music and dance.

“We’re all blessed to live in a country that is extremely diverse. To me, that’s one of the greatest treasures that this country has to offer.”

Dinorah Márquez Abadiano is one of several people receiving alumni awards from UWM this year honoring their professional achievements, civic involvement and university partnerships. They will be celebrated at an awards ceremony on Feb. 24 at the Pfister Hotel in downtown Milwaukee.

The full list of winners can be found on the UWM Alumni Association webpages.