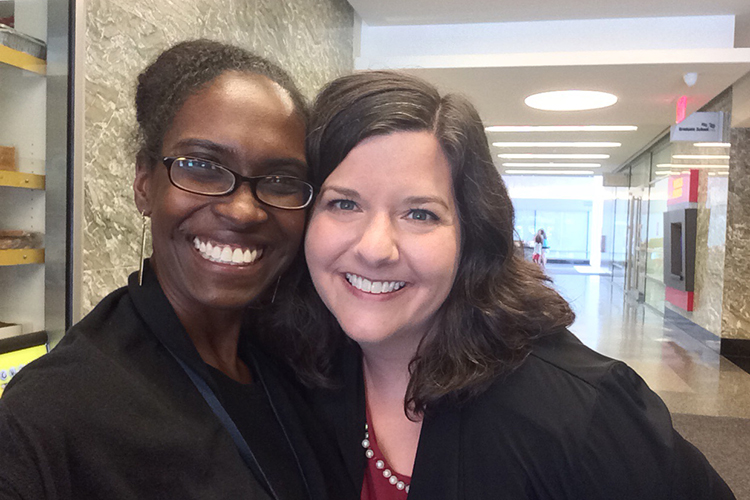 The National Museum of African American History and Culture officially opened its doors on Sept. 24, becoming the newest Smithsonian Institution on the National Mall in Washington, D.C.

“It’s very rigorous training for docents and museum staff on implicit bias,” Winkler said. “Part of what I was working on with them was racial identity development and how children understand race, and what this means about how to engage people of all different ages on topics that sometimes adults think kids can’t understand or are inappropriate.”

Winkler was invited to Washington in March to be part of a panel of national experts to talk about how to conduct the sometimes-uncomfortable discussions about race. Those discussions helped determine how to train the museum’s volunteers. She was invited back in June to work directly with the museum staff to prepare them for the opening.

The museum was established by Congress in 2003 and is the only national museum devoted exclusively to African American history, life and culture. It will serve as a space where visitors can learn about the experiences of African Americans, from the triumphs of sports stars and activists to the challenges of the Civil Rights movement, to the history of slavery in the United States. One of the museum’s target audiences is children, from toddlers to elementary school students, along with their parents, teachers and caregivers.

That can be a tricky audience, Winkler said, especially because many of the ways parents teach children about race and racism often backfire.

“Often, adults think they don’t understand, or that if we talk to them about it, then we are putting ideas in their head, poisoning their minds. Although it’s counterintuitive, the opposite is true,” she said. “Little kids are observing patterns in the world around them. They’re seeing things like who lives where, who is the princess in the storybook, who seems to have what kinds of jobs. They often, counterintuitively and unintentionally, infer that there must be inherent differences between people that cause these patterns to be.”

Instead, she said, parents and teachers should acknowledge differences and inequalities when children point them out. The talk should be age appropriate and recognize that racism is not something that died out with the Jim Crow era, but still exists today. Rely on the concept of fairness, she advised. Children are quick to understand when something’s unfair, and the same applies when it comes to discrimination against people of color.

“Another thing I talked about in the training for the museum staff is that you are modeling by having open conversations about race that are not fraught with discomfort or unsettling emotions,” Winkler added. “If a child talks about something or asks a question that seems biased, if we hush them or scold them, all we’re doing is teaching them not to talk about it.”

She hopes that the museum will be a place where people of all ages, not just children, can come together to address racialized inequality in the United States. Discrimination has been on the forefront of national thought recently, in part thanks to the Black Lives Matter movement.

“I’m pleased there’s a place where the African American experience is being centered, in our nation’s capital, on our National Mall,” Winkler said. “I also just want people to get the richness of African American culture, history, societies and social systems. African American history and culture is not only about racism.”

And, she added, it was nice to have UWM play a role.

“It’s really exciting to have UWM and the Department of Africology be part of this relatively small group of experts coming from prestigious institutions from all over the country,” she said. “It was a joy being part of that.”