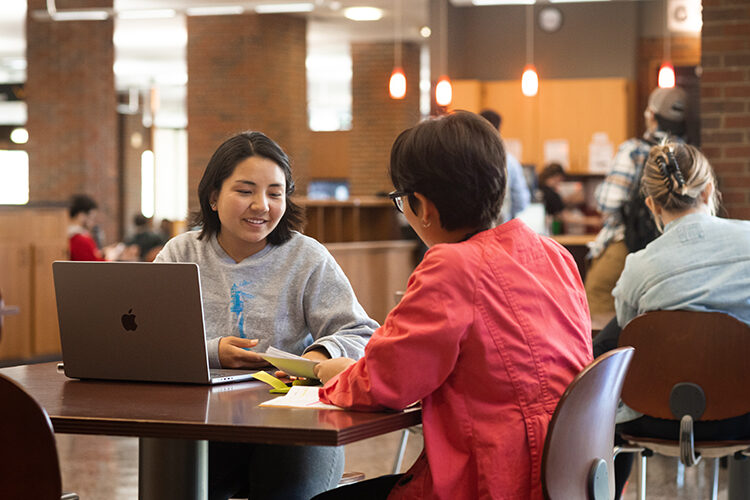 Farzana (left) and Khatera, first-year students at UWM, left Afghanistan after the Taliban took over and made their pursuit of an education impossible. (UWM Photo/Elora Hennessey)

Khatera and Farzana, first-year UWM students from Afghanistan, have come a long way to try to make their hopes a reality.

They are among 148 young women from the Asian University for Women who escaped from Afghanistan in August 2021 amid gunfire and bombings at the Kabul airport. Ten of the young women are now studying at UWM.

The transition is difficult, but the students are willing to do what it takes, Khatera said. “I want to be able to pursue my hopes. I don’t want to keep them as a hope. I want to make them true.”

This story is using only the students’ first names to protect the families they left behind. Khatera’s mother has already had three visits from the Taliban, demanding to know if she had family in the U.S. or other countries. “She was terrified and told them no,” Khatera said.

UWM is one of 10 partner universities across the U.S. who welcomed the women from the AUW. UWM’s English Language Academy became involved through a national consortium of similar English language programs.

The university connected with Eastbrook Church through senior lecturer Mari Chevako, who is a member the church. Eastbrook, which serves refugees as part of its mission, quickly agreed to find host families for the young women and helped raise money for intensive English classes and their first year of tuition.

Wanting to help others

Farzana is studying psychology with the eventual goal of helping immigrants and refugees. “That is something I can relate to personally.”

Khatera is studying microbiology with the goal of becoming a doctor and helping others. “There are challenges, but we are overcoming the challenges and, hopefully, we will be OK, or maybe great.”

The challenges the young women face include language barriers, cultural misunderstandings, worries about their future and waves of homesickness.

“We had a happy life in Afghanistan, and suddenly it all changed,” Khatera said. But education was so important to her and Farzana and the others that they fled, leaving families behind.

The danger remains for women trying to pursue education in Afghanistan. On Sept. 30, an explosion at a Hazara school where young women were preparing for an exam killed at least 53 and injured more than 100.

Khatera, as a member of the persecuted Hazara minority, is passionate about bringing attention to the issues, promoting the #StopHazaraGenocide hashtag.

Like the other students, she struggles to balance her roles as student and advocate. “I need to do my homework, but I also need to speak for my people.”

Khatera and the other students try to keep a low profile to protect their families back in Afghanistan, but also continue to speak out and educate the community. Recently, they shared their stories and a documentary about the Hazara persecution with their host families and hundreds of members of Eastbrook Church at a Sunday service. Students and church members shed a few tears as they prayed together for peace and an end to persecution of women and minorities.

“The Taliban or any group that are against education and women don’t know there is no limit to what women can accomplish,” Khatera said.

The university and Eastbrook Church made a strong commitment from the start to raising money and finding other ways to make sure the young Afghan women can continue their education, according to Brooke Haley, director of the English Language Academy.

The support comes from a combination of organizations. For example, seven of the young women were awarded scholarships for this year through the Dr. Ahmad Nasef Scholarship of the Hanan Refugee Relief Group. The scholarship was created in 2021 in honor of Dr. Ahmad Nasef, an early champion and lead supporter of Hanan’s Wisconsin Chapter.

Several of the young women have also found part-time jobs to contribute to their expenses and tray and help their families.

Before the 2022-2023 school year started, enough money had been raised for the young women to cover the entire first year of college. Haley is organizing a workshop to help the students apply for financial aid and learn how to use the scholarship portal, now that the U.S. has given them humanitarian parolee status. With continued fundraising and student aid, there should be enough money to cover a second and third year at UWM, according to Haley.

“They are well on their way to getting all four years paid,” Haley said.

For more information or to donate, go to ASPOM.org.