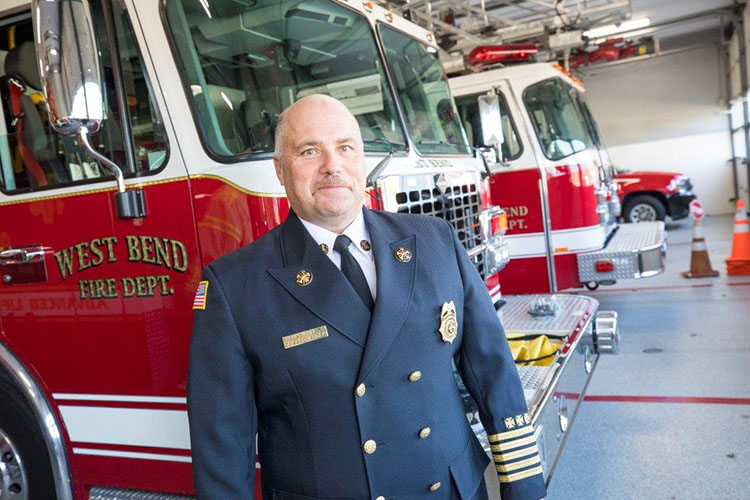 “No one joins the fire department to sit behind a desk,” says West Bend Fire Chief Gerald Kudek said. “We are all drawn to this profession to help people, to make a difference.” (UWM Photo/Troye Fox)

Seeing is believing. For more than 20 years, Gerald Kudek watched his father’s dedication as a paid on-call firefighter, and saw the satisfaction the work brought his dad. It’s what led him to become a firefighter. Named West Bend fire chief in 2012, Kudek has served the city as a firefighter since 1984.

A lifelong resident of West Bend, Kudek wasn’t sure what he wanted to do after graduating from high school. He enrolled at UW-Washington County (now UWM at Washington County) in 1983.

“Staying local allowed me to get an advanced education and work for the Fire Department part-time,” Kudek said. “This eventually led me to that career.”

After completing his associate degree at the Washington County campus — “with no student loans” — Kudek earned a Bachelor of Fire Science Management degree from Southern Illinois University. He is also a graduate of the Executive Fire Officer Program at the National Fire Academy in Maryland.

“No one joins the fire department to sit behind a desk,” Kudek said. “We are all drawn to this profession to help people, to make a difference.”

Moving up the ranks

Kudek has held various positions within the department as firefighter, advanced EMT, motor pump operator, training officer, lieutenant and battalion chief of training and operations. The satisfaction he receives from helping people, as well as “working with extremely talented and dedicated individuals,” is what he values most.

As he progressed through his career, his “responsibilities shifted from helping victims to helping firefighters help the victims. Providing the right equipment, the right training, and the right environment to ensure that they are safe and have the tools needed to do the job,” Kudek said.

As chief, he administers all aspects of the fire department, including a $4 million budget, supervising of shift personnel, hiring new firefighters and establishing strategic goals and plans for the department.  Kudek also served as the president of the Washington County Fire Chiefs Association and is the current president of the Washington County division of the state’s mutual aid system.

Through the years, his team has had many successes, including the implementation of a Community Paramedic Program, in which specially trained paramedics visit and treat recently discharged hospital patients in an effort to reduce hospital readmissions. The visits — free of charge, thanks to a grant from St. Joseph’s Hospital Foundation — utilize firefighters’ paramedic skills to provide in-home patient assessments, referrals to community resources and provide wellness education. All of these efforts help reduce readmissions.

“West Bend is so fortunate”

“It has been my pleasure to be part of Gerry Kudek’s career with the West Bend Fire Department,” Heaps said. “He has consistently demonstrated his ability to manage his department and his commitment to our community. West Bend is so fortunate to have someone with Gerry’s leadership ability to serve as head of our Fire Department.”

Kudek hopes to find a way bring shared or consolidated fire and emergency medical services to Washington County. His goal is to “reduce response times and improve the level of service for all of Washington County by developing a response plan that does not rely on municipal borders, but rather on strategic locations of fire stations,” he explained.

Service and leadership roles go well beyond his job. An active member of Good Shepherd Lutheran Church in West Bend, Kudek served as congregation president. He is also on the board of directors for Kettle Moraine Lutheran High School, where he earned his high school diploma. In addition, he was the leadership alumni president for the West Bend Chamber of Commerce and vice president for the Volunteer Center of Washington County. Recognitions include the American Legion Firefighter of the Year for 2001, a certificate of achievement from the governor’s office in 2012 and UWM at Washington County Alumnus of the Year in 2018.

The only negative that Kudek has about his job is the harsh reality that “sometimes we simply can’t help — we are just too late or the damages are too severe. This is whether you are talking about life or property,” he said.

Kudek has no regrets, however, in choosing this career. “I would do it all again.”