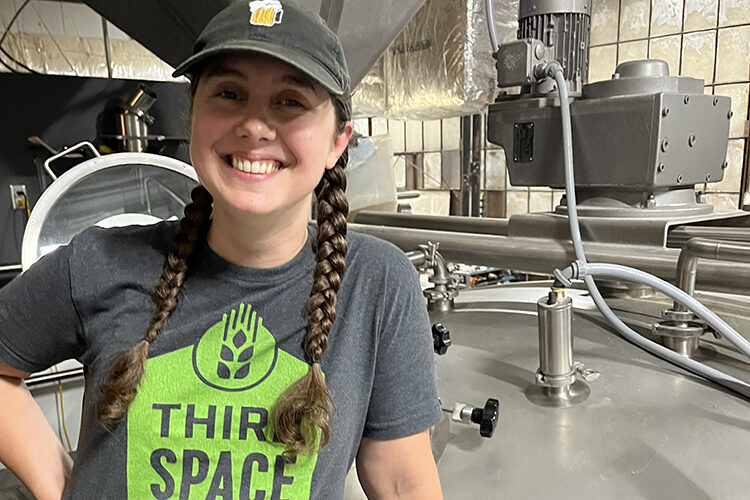 Samantha Danen stands on the brew deck at Third Space Brewing, where she is a brewer. (UWM Photo/Sarah Vickery)

Samantha Danen is a bit of a beer nerd. She began homebrewing while she majored in art history at UWM, and fell in love. But when she tried to get a job in the craft beer industry, Danen found herself passed over time and again for men who had less experience and knowledge than she did.

Eventually, she found a way to wedge her foot in the brewery door and became Milwaukee’s first female craft brewer. She’s now a brewer at Third Space Brewing Company and the Wisconsin chapter leader of the Pink Boots Society, an organization that supports women in fermentation industries.

Danen sat down (with a beer in hand, of course) to talk about her career, women in brewing, and just how beer relates to her art history major.

Why did you choose UWM for your art history major?

I chose UWM because I knew pretty early on in high school that I loved studying art. When I started researching more about schools in Wisconsin with art history programs, UWM was listed as one of the best.

Most art history alums that I talk to are not brewers. What on earth happened?

My dream was to graduate with my degree and become a curator. Then, I had an internship where I helped curate artwork with local artists for some exhibitions. I was so excited about it, and I got to pick the artists and decide how to present their work.

It ended up being a complete disaster. I hated every second of it. Artists want to show their work in the way that they want it to be perceived, and the whole point of curation is to take a step back and show their art in a way that evokes emotion through the viewer in a way that (the artist) may not have presented themselves. But some artists are not the nicest people to work with. I had a feeling it was going to take a long time to get to a point where I would be respected in my field.

All the while, while I was in college, I discovered craft beer. A buddy and I started homebrewing together. The process of making beer is so similar to art history.

How can brewing possibly relate to art history?

There are four ingredients: It’s literally malt, yeast, water and hops. That’s all it is. But there are so many different types of those ingredients that you can utilize. What art historians do is pick components of art apart and talk about them individually, and then how they come together at the end to create the finished product. For me, beer was so similar in that way. You have these really beautiful things that you’re putting into the product. Let’s pick them apart, analyze them, and love and appreciate them for what they are, and then bring them back together for this end product and appreciate that as a whole.

My mom always asked, if I had to wake up every day doing something that I loved, what would it be? For a long time, I thought it was curating art. Somewhere along the way, it became, ‘If I could brew beer every day of my life, I would be the happiest person on Earth.’

I imagine brewing is a hard industry to get into without having a beer-related background. Apparently, it’s even harder if you’re a woman.

When I was looking to get a job in the brewing industry, there were very few breweries around here. It was just the main ones: Sprecher, Lakefront, Brenner Brewing. And I didn’t know of a single woman who worked in Milwaukee as a brewer.

I was applying at Sprecher and places like that, and there “weren’t any positions available.” It’s not like I went into this blind. I read up on beer and really studied the same way that I would have studied art, because I knew that I had to have the knowledge base. You’re able to talk the language. You’re able to confidently say, I can do these things. I want to learn more. … And then no response. It was like that time and time again. It became a slap in the face because I had male friends who had never home-brewed or didn’t know much about beer at all, and they would apply for assistant brewer positions and get the job immediately.

How did you get your big break and become the first woman in Milwaukee’s brewing industry?

I was helping a friend run a homebrew club out of the Rumpus Room downtown. It gathered a bunch of beer nerds together. One of the people that we showcased was George Bregar, the owner of Company Brewing and the person who gave me my first job in a brewery. … His beer was so good. It was the best homebrew I’d ever had in my life, and I was so impressed.

After a few of these meetings, we connected, and he told me (he was going to) open his own brewery. That was my moment. I thought, ‘I must beg and plead, do whatever it takes, to get a job.’ He hired me on as a server, and when they finally needed a little help in the brewery, that’s when I was finally called on.

How did you get from Company Brewing to Third Space?

I worked for Company Brewing for five years and eventually became head brewer there. I was so excited to be part of that operation. I learned so much and made so many great beers and great memories there. The only reason I left is that I was looking to grow a bit more in my career.

Third Space Brewing was my top choice because I felt like they really put their employees first. Also, the quality of their beer was incredible. The biggest draw that brought me here was that at the time, the production staff was eight people, and four of them women, which is absolutely unheard of in this industry.

It’s funny, because women were the original brewers. They were called witches at one point, for doing it. Something that I’ve made my mission since I’ve gotten into the industry is to help other women, and young women, to be in this industry.

This seems like the perfect time to talk about the Pink Boots Society.

It’s an international organization, and it’s not just beer; it’s for women in all fermentable beverage industries. We have individual chapters, and we do a lot of fundraising. All of the money that we raise goes towards scholarships and educational opportunities for our members.

I am the Wisconsin chapter leader of the Pink Boots Society. It brought me together with a bunch of women across the state who are just like me and had to go through all of the same hurdles that I did. It was so nice to finally feel bonded with a group of people that way. I try to set up fun opportunities throughout Wisconsin. We just had (an event) at Old World Wisconsin and they did a brew-day history with us, where we spent an entire day going through what brewing was like back in the 19th century. We literally brewed beer over an open flame.

Let’s talk about brewing. What goes into being a brewer?

So much. One of the things that I love about Third Space is that we do not have a hierarchical system. Most breweries start you off on packaging, where you package the beer into cans, kegs, bottles and whatnot. If you’re lucky enough to make it out of packaging, usually you move up to cellar work. That entails processing the beer before it gets to packaging.

Then you have the brewing position. Typically, you’re responsible for brewing the beer: mixing the malt and the water together, extracting all of the sugars out of the grain in the mash tun (a type of brewhouse kettle), adding hops and adding yeast. The yeast is going to eat that sugar and create the byproduct of alcohol, which is our beer. After about a week to two weeks, your beer is going to be done fermenting. The cellar people will extract the yeast and add more hops. We’ll transfer the beer through our centrifuge, which will take out any remaining solids. Then your canning line will package the beer once it’s carbonated.

At Third Space, every single person who works here does all of those things. Yesterday, I was on the brew deck. Today, I was in the cellar. Tomorrow, I will be on the canning line. My favorite thing is brewing a recipe that we haven’t brewed before. It challenges you, as a brewer. You get to use the art of brewing and your skills and your knowledge to put it together.

Do you, personally, get to make new recipes?

Yeah! I’ve created several recipes while I was at Company Brewing, and I’ve created more since I’ve been at Third Space. The one that we do on the largest scale here is an IPA called Like A Girl, and that’s a collaboration brew that we do with the Pink Boots Society. I got to help come up with that recipe.

Do you ever walk into the grocery store and pick up some Third Space beer and think, “I made that”?

Absolutely. I look at the bottom of cans all of the time to see when they were printed so I can see if I was on the canning line that day.

What are you drinking in your personal time?

New Glarus. Anything from New Glarus, really, but my go-to is Moon Man. It’s probably my favorite beer of all time.