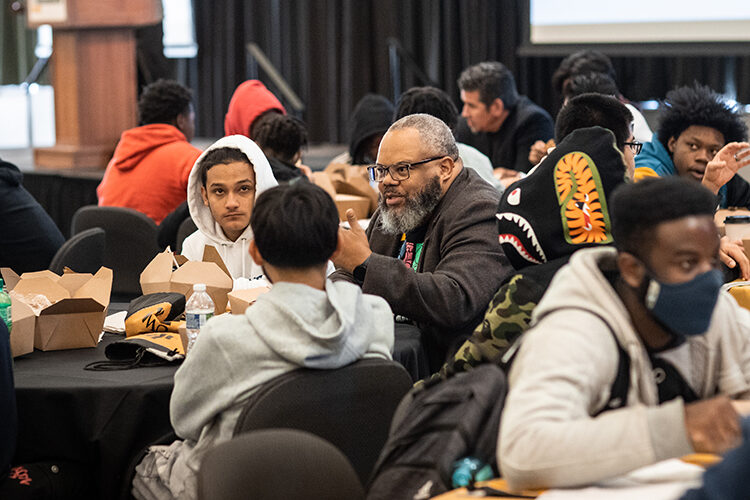 James “Groovy” Cocroft, assistant director of UWM’s Military and Veterans Resource Center, talks with MPS students during their visit to the university by participants in the school district’s Department of Black and Latino Male Achievement. (UWM Photo/Elora Hennessey)

Approximately 200 young Black and Latino men visited the UWM campus Thursday, Oct. 20, to get a taste of campus life, meet mentors and learn how to support each other while changing stereotypes that affect them.

They were part of a new collaboration between the university and the Milwaukee Public Schools’ Department of Black and Latino Male Achievement. The students, ranging from ninth through 12th grade, were from 11 MPS schools.

Chia Vang, UWM’s vice chancellor of equity, diversity and inclusion, welcomed the group to campus, telling them, “You belong here.” Education helps define where you go in life, so go back home and think about applying to UWM, she told the young men.

Marc Young, executive director of the Office of Undergraduate Admission, and staff members showed the young men around campus and talked about how to apply to UWM.

Young, along with Alberto Maldonado, director of the Roberto Hernández Center, and Chris Brundidge, associate director of undergraduate admissions, kept the activities and campus tours running smoothly, helped by a team from MPS and 25 UWM staff members.

One of the goals of the gathering was to give the young men a chance to get to know and work with students from other schools, according to Paul Moga, coordinator of the BLMA department at MPS. Tables were arranged so that students from different schools were seated together and, working with mentors, could give different viewpoints during discussions about their school culture and the challenges they faced as young Black and Latino males.

In an icebreaker at the beginning of the day, students laughed and joked while compiling a list of 10 things they had in common despite their attending different schools. Sports, food and videogames were among the most popular commonalities, in addition to being part of BLMA. When one group couldn’t decide between TikTok and Instagram, they collaborated to come up with the term social media as one of their top 10.

In earlier meetings in September at individual schools, students had discussed Milwaukee’s complicated history of segregation and how it affects them. One challenge many of these students face is being stereotyped because of their race.

One of the key goals of BLMA is to help these young men succeed, as well as to trust, support and encourage each other and conduct themselves with dignity, Moga said. “We need to challenge those stereotypes. “You have an opportunity to make a new narrative.”

The young men are being asked to be the example for other young Black and Latino males in their schools, their city and the country, he added.

He emphasized the 12 guiding principles of BLMA, especially brotherhood and community.

At the tables, students, encouraged by mentors in each group, discussed their school’s culture and how stereotypes played out in their schools. One student commented that some schools gained a bad reputation because of fights, but others, like his school, Reagan, rarely had fights.

It is critical, said Moga to understand why that happens and how students can change the perception and the narrative. Those are the things that come out of segregated situations, he added, when some schools have more resources than others. “Nobody’s to blame, but the question is how can we build brotherhood and trust” to be strong together and change the narrative.

In a discussion at his table, Ali Ali, a junior at Riverside University High School, said his group circled back to the idea of changing the narrative. “It’s a generational thing. People say the Black man is a thug or he’s always late. You have to change those things” by being on time and carrying yourself the right way, he told the gathering.

Students like Simeon Murchison, a Hamilton senior who plans to attend UWM, said the BLMA at his school helped him appreciate his own culture and heritage.

For many of the students, this was a first visit to the campus; others had spent time at UWM previously. The young men had varied feelings about higher education. Taron Mays, a senior at Bay View, said he thought he would take a gap year after high school to work in business, helping his dad open a restaurant.

Ricky Elmore, a sophomore at Reagan, said he felt earning his university degree was important. “I definitely want to get my bachelor’s degree. I’m not sure exactly what I want to do, but that will be a good foundation.”