Spoiler alert: Crunched for time? The first two paragraphs tell the story in a nutshell, but as always, the Devil’s in the details.

W.J. Holland, in his monumental The Moth Book (1903), wrote about yucca moths that

No discovery in recent years has been more interesting to students of insect and plant life than that which was made in 1872 by Professor Riley, of the intimate relationship which subsists between the beautiful plants, known as Yuccas, and the genus of moths to which the present species belongs. It has been ascertained that the fruitification of the various species of Yucca is almost absolutely dependent on the agency of the female moth; and strangely enough, it has also been ascertained that the pollination of the flowers is not the result of mere accidental attrition of the wings and other organs of the insect when engaged in seeking for nectar in the flower and when engaged in laying her eggs, but that she deliberately collects the pollen in her mouth, which is peculiarly modified to enable her to do this, and then applies the pollen to the stigma with infinitely better care than it could be done by the most skillful horticulturist using the most delicate human appliances.

There are several species of the genus Pronuba [the old genus name], and they hold a positive and well-ascertained relationship to the various species of the plants in the economy of which they perform so important a function.

The BugLady was admiring her yuccas recently—with five heavily-laden flower stalks, they are overachieving this year—when she noticed a small, white moth that was also enjoying the view, and she thought, “Moth.” “Yucca.” “Yucca moth?” “In Wisconsin?”

The BugLady would bet serious money that anyone who has taken an ecology course has heard of the Yucca Moth. YMs are the Poster Children for an ecological relationship called mutualism, a relationship between two species in which each species benefits from a “service” provided by the other. The Yucca and the YM are linked by what ecologists call obligate pollination mutualism, which term will be unraveled shortly. YMs are a very old moth group that has been interacting/coevolving with yuccas in the Great Laboratory of Life for a very long time. So much has been written about yucca moth mutualism that the BugLady thought this episode would be a slam-dunk. Instead, she has been knee deep in the murky world of Yucca Moths (family Prodoxidae), grappling with the lives of the “true” Yucca Moths and the Bogus Yucca Moths (a name coined by Professor Riley).

The yucca moth family is a primitive one that is found worldwide, though not all Prodoxids are involved with yuccas. As a group, they are smallish and nondescript. The number of species associated with yucca is up in the air because, as Holland went on to predict, “No doubt there are other species of Yucca which will be ultimately discovered to have species of Pronuba which are adapted in their organs to the work of pollination according to their peculiar requirements” (the BugLady loves 19th century scientific writing) and indeed, new studies have revealed new species and species complexes. It may turn out that each yucca species hosts its own YM species. At least.

As Yucca has been carted around and planted horticulturally (it survives as far away from its native Southwest as Ontario), YMs, especially Bogus YMs, have expanded their range and followed. Riley is said to have shipped “true” YM larvae to Europe, with uncertain results.

Several species of YM can occur in the same yucca. “True” YMs (mostly in the genus Tegeticula) pollinate Yuccas. Because of the shape and location of the reproductive structures of the yucca, cross-pollination can’t happen accidentally, so all yucca species except one depend on YMs (that odd yucca is pollinated by bees). Bogus YMs (mostly in the genus Prodoxus) don’t deal in pollen, but they cash in on the hard work done by their sister moths.

What’s the difference between a “true” YM and a Bogus YM? In appearance, not much. Most family members are whitish (a few are brown or speckled) and about one-half-inch long, with a frizzy-looking head. Researcher Dr. Olle Pellmyr writes that “The thorax is humpy. This is characteristic of Tegeticula, whereas Prodoxus has a smaller thorax that tapers off further with the head. I sometimes refer to their resting profiles as ‘race car’ (Prodoxus) and ‘bulldog’.” The BugLady has stared long at pictures of both on bugguide.net, and she can’t quite see it, but she thinks she has the “bulldog” here. A big difference lies in the mouthparts of the female. “True” YM females have little tentacles (think Pirates of the Caribbean ) instead of regular Lepidopteran mouthparts, and Bogus YMs have a proboscis.

So, what’s this mutualism all about? YMs emerge from underground cocoons as their favorite yucca species start to bloom (awakened, one source said, by the aroma of the flowers); males and females rendezvous on the flowers by night. The female Tegeticula/ true/pollinator YM uses her odd tentacles to collect sticky pollen from fresh yucca flowers, form it into a lump, and tuck the lump under her “chin” (adults do not eat). The pollen ball may account for 10% of her weight.

Then she flies to a flower on a different yucca stalk (usually between dusk and midnight) and ascertains, through the presence or absence of pheromones, whether another female has already oviposited there. If the flower is “used,” she will move on (if there are too many larvae in the developing fruit, it will “abort” and turn a “win-win” into a “lose-lose.”). If a flower passes muster, she lays a few eggs in/on the ovary of the flower so her larvae can feed on the seeds that develop there. To ensure that there will be seeds, she fertilizes the flower herself by applying the pollen ball to the tip of the stigma (the top of the tube that leads to the ovary). It’s the only way the yucca can be pollinated.

She rubs the area with her abdomen to deposit her pheromones and departs to repeat the process; mission accomplished—the next generation of both plant and moth is under way.

When the eggs hatch, the larvae of the true/pollinator YM live within the ovary and eat a few of the yucca’s hundreds of seeds, a small price to pay. A few weeks later they exit the fruit (mysteriously, they prefer to exit in the rain and will wait for days within the fruit for a storm), and they pupate in the soil below. If the weather discourages the yuccas from flowering the next spring or if plant and moth phenology gets out of sync, the pupa can wait in diapause (dormancy)—and wait—for a decade or more to be lured from the ground. 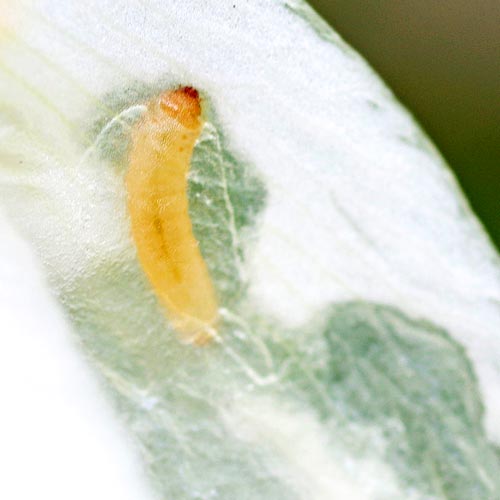 The Bogus/non-pollinating YM Prodoxus lays her eggs within a yucca’s leaves, flower stalks or developing fruit (depending on the species of Prodoxus), and the larvae feed inside. Full-grown Prodoxus larvae create a chamber within the plant tissues and pupate there (one researcher reported a 19 year diapause). If the pollinating/true YM isn’t available to fertilize the yucca, the flower stalk that harbors the Bogus YM will wither prematurely and strand the growing larva.

A week after she started seeing YMs, the BugLady found larvae eating the layers of the petals (an “iffy” place to feed, long-term, because petals loosen and fall). She couldn’t find any account of YM larvae feeding on petals, so it’s probably a beetle larva taking advantage of an abundance of fresh food. Like one of those word problems in Math where they give you extraneous information.