We have already met the Woolly Alder Aphid (Prociphilus tessellatus) (tessellate—to form or arrange in a checkered or mosaic pattern), through the eyes of one of its predators, the carnivorous caterpillar of the Harvester butterfly, but it has its own story to tell. Woolly Alder Aphids (woolly or woolly—both spellings are correct) are not the only woolly aphids, but they are a common species that can be particularly noticeable in autumn, as leaves fall (the BugLady has also included a picture of some woolly “beech blight aphids” that she found last fall.They were doing the most astonishing alarm behavior, a behavior that has earned them the name “Boogie Woogie aphid.”). Watch the video.

Woolly aphids (family Aphididae, subfamily Eriosomatinae) are spectacular when sitting on twigs in large assemblages, and startling as individuals, flying through the air like bits of fluff or feathers. Their aerial appearance has earned them common names like fairy flies, fluff bugs, and angel bugs. They’ve also been given the slightly less flattering name “maple blight aphids.”

The “wool” on a woolly aphid is wax, produced by abdominal glands in order to make the aphid look less like a Happy Meal to its predators. The wax streamers shed water, make the aphid look like mold, and are distasteful and distracting (the Harvester caterpillar covers itself in aphid wax, too, and so does the marauding green lacewing larva). Several sources suggested that the strands also assist a woolly aphid when it’s aloft, helping it float in the breezes and disguising it as an airborne plant seed. Some, but not all adults are woolly.

Like many other WAs, a WAA’s lifestyle is complicated, involving two host plants at two different stages of its life. For much of her life, a female aphid reproduces parthenogenetically, popping out live young (clones) all over her host plant without benefit of male companionship and without eggs (no-frills reproduction). Her young can reproduce at an early age, and it’s jokingly said that a female aphid who starts at the bottom of a plant stem is a great-great-grandmother by the time she reaches the top. Someone once calculated that in optimal conditions—good food, balmy days, and no predators—an aphid could have six billion offspring by the end of the season! In times of stress—when they’ve sucked a plant dry, or frosty weather is approaching—a winged generation of both males and females is produced and bodily fluids are exchanged (and genetic diversity is boosted).

WAAs lay their eggs on Silver maple trees (Acer saccharinum) (the eggs have woolly coats, too). The eggs, all female, hatch in spring as leaves are bursting, and the aphids feed along the midrib of the maple leaves. In early summer, as maple leaves are toughening up, a winged generation flies from maple trees to alder shrubs (Alnus sp.). There, they tuck in again, imbibing alder juices. 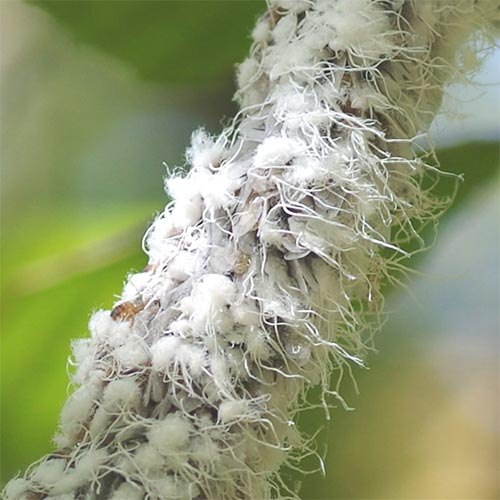 Decreasing day length signals the alder crowd to produce winged generation (alternatively, they may start producing both males and females when they arrive on the alders, but these reproductive aphids don’t mature until signaled by the end of the growing season), and they make for the maples again. Eggs are laid (just one per female!) in crevices in the bark. Most sources state that the WWA overwinters in the egg stage, but they also mention adults overwintering on maples in fuzzy clumps. WAAs are found in North America east of the Mississippi, and maybe adults of southern populations can overwinter successfully. 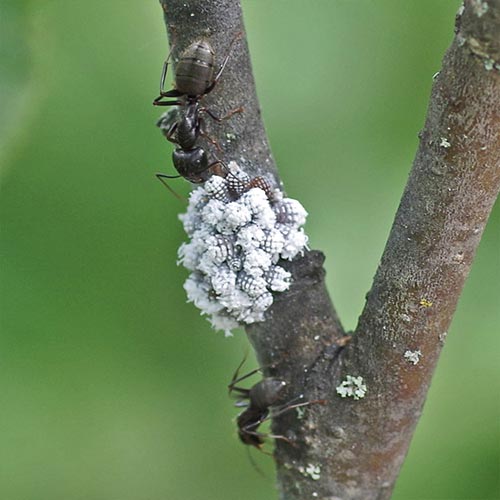 Aphids are plant-juice-suckers. They stick their mouthparts in the plant of their choice and drink far more sap than a critter that size would seem to need (it comes out under pressure, too). Why? They’re after the sugars (the carbs) in the sap, but they also need nitrogen, which is present in very small quantities. Young insects, especially, need nitrogen to build proteins—protein is made up of amino acids, and nitrogen is an ingredient of amino acids. The strategy—drink LOTS AND LOTS of plant juices in order to pick up sufficient nitrogen, and jettison the unwanted carbs in the form of a sweet substance called honeydew. 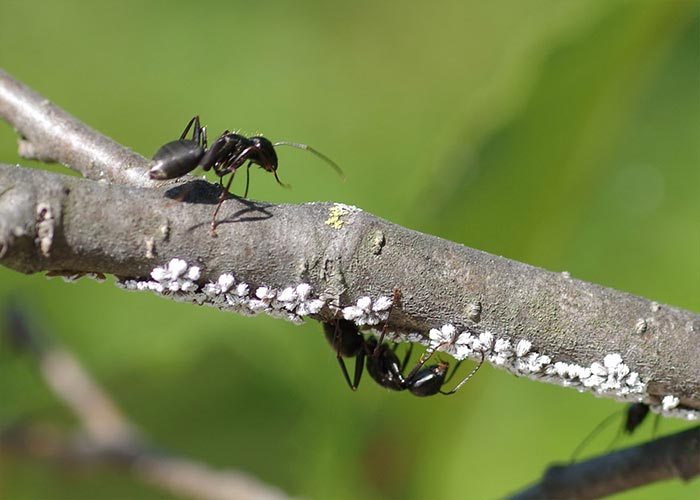 Honeydew is a desirable commodity in the world of invertebrates. If left alone, aphids simply drop their honeydew on surrounding leaves, where it acts like a shiny magnet for flies, wasps, bees, and other vegetarians. But aphids, and other Homopterans like treehoppers and scales, are often seen in the company of ants. These ant guardians care for their flocks, defend them from predators, and even transport them to greener pastures. The payoff is that the ants may “milk” the aphids, harvesting the honeydew directly from the source and transporting it to their nests (some ant species have specialized “tanker ants”). Research has shown that a “farmed” aphid produces more honeydew during its life than an “unfarmed” one, and according to entomologist Debbie Hadley “Some aphid species have lost the ability to poop on their own, and now depend on their caretaker ants to milk them.” The Minnesota DNR cautions us that “while the honeydew excreted by the aphids is very sweet, it is mixed with aphid waste materials, so licking the honeydew off your car windshield is not recommended.” 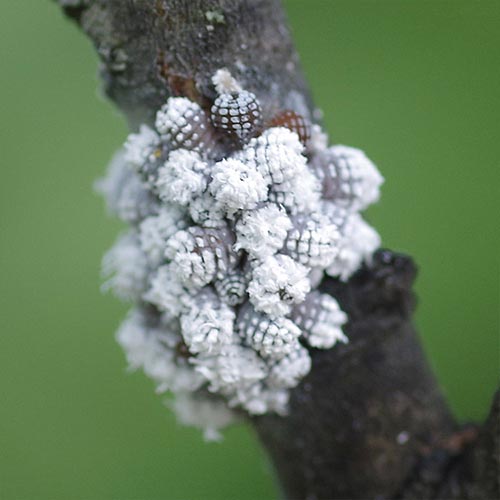 For all the plant juices that are consumed by WAAs, individually and communally, most sources agree that damage is minimal and WAA control is unnecessary (a big crowd of WAAs might cause some maple leaves to shrivel, but some other species of WAs have a much greater impact on their hosts). As Iowa State University notes in one of its Iowa Insect Information Notes, “Woolly aphids are an important resource for natural biological controls such as lacewings, lady beetles, hover flies, and parasitic wasps. Tolerance of aphid presence is one way to encourage beneficial insects.” They go on to say “Flying adults are a wonderment. They are intriguing, not harmful. When adults are migrating, the feeding and honeydew production on the maples has been accomplished and no control is needed. Relax and enjoy the fascination of Nature.” 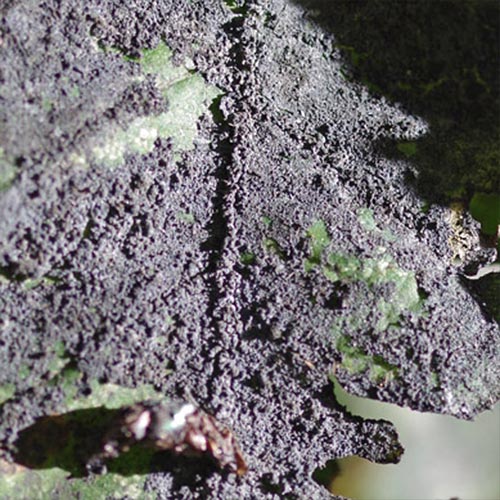 That being said, there are several “down-sides” to having WAAs, and honeydew is at the top of the list. It’s sticky, and objects that it falls on (like sidewalks, lawn furniture and cars) get sticky, too. The wasps and bees that are attracted to honeydew have stingers. Thick deposits of honeydew turn out to be the perfect culture medium to grow a “sooty mold,” a creepy looking crusty fungus that can cut off sunlight to a leaf surface.

Read about the Harvester Caterpillar.