Do flowers adapt to their pollinators, or do plants “train” their pollinators? If you guessed the second, you’re right—over the millennia, pollinators have adapted to harvest nectar and pollen from a variety of delivery systems designed by flowers. Some startling structures are found on animals that feed on tubular flowers (pollination is an accidental service).

The star of today’s BOTW, the very spiffy White-lined Sphinx Moth (Hyles lineata), nectars on a variety of “flat” flowers like apple but is able to reach deep into tubular flowers like petunias, columbine, and honeysuckle. To this end, it carries its long proboscis coiled under its head. 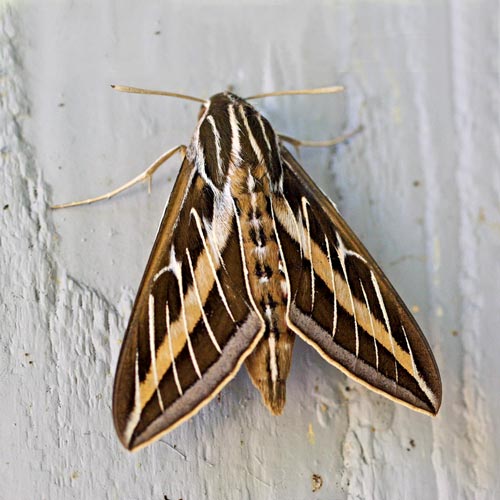 White-lined Sphinx Moths can be found from mid-spring until early fall in open areas (parks, gardens, grasslands, scrublands and deserts) throughout North America, from Canada to Central America and the West Indies (they’re also found in Europe). They are considered one of the most common sphinx moths, but there are fewer as you go north. Although they are, like many sphinx moths, more active from dusk to dawn, WLSMs are sometimes (inexplicably) called the “Morning Sphinx.” Sphinx caterpillars are called hornworms because of a spine that adorns their rear end during part or all of their caterpillar-hood (the WLSM caterpillar is related to that bane of gardeners, the Tomato Hornworm). The name “Sphinx” comes from the caterpillar’s habit of rearing its head up when alarmed and looking like an Egyptian sphinx. Sphinx moths are called Hawk Moths in England.

There are about 125 representatives of the Sphinx moth family (Sphingidae) in North America. They can get pretty big, with heavy, spindle-shaped bodies and wingspreads of up to 6 inches. The front pair of wings is often narrow and quite a bit longer than the second pair, and many species have dramatic markings or color blocks on their wings. Sphinxes are strong flyers, difficult to capture, and some can fly 35 mph. Their rapid wing beats, ability to hover, and largish size cause them to be mistaken for hummingbirds in the late afternoon. Sphinx moths do not make sounds, so they don’t need or have ears (tympana); they have large eyes, and they communicate via scent (pheromones).

With 2½ to 3½ inch wingspreads, WLSMs are medium-sized sphinxes. There are other sphinxes with a contrasting line down the front wing, but the WLSM also has white lines on the wings’ cross veins.

Many sphinxes have well-camouflaged larvae, but the members of this genus are pretty showy. WLSM caterpillars start at yellow and black or lime green and black and are tremendously variable, (see Bugguide). By happy accident, the BugLady’s 20 year old color slide of an unidentified caterpillar sitting on evening primrose (a favorite WLSM caterpillar food in Wisconsin) turned out to be a WLSM caterpillar. 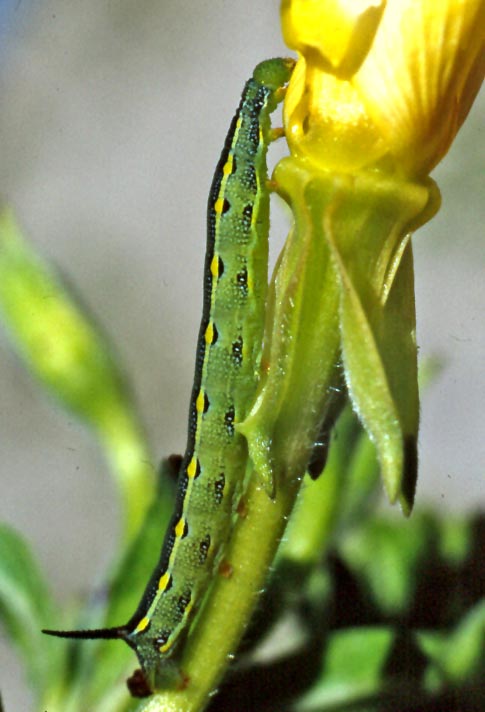 In some parts of the country there are two and even three broods a year. Early broods pupate for two to three weeks in “cells” they excavate in the earth, and the last caterpillars of summer spend the winter underground as pupae. According to Sogaard, in Moths of the North Woods, the temperatures in the northern half of Wisconsin are too cold for the overwintering pupae, so the moths we see in summer are immigrants from the south. Besides Evening Primrose, caterpillars are recorded on portulaca, purslane, chickweed, apple, elm, and grape laves and on some garden vegetables.

WLSMs are famous for their occasional population booms, especially in the Great Plains and the Southwest. In Caterpillars of Eastern North America, Wagner writes,

I have seen outbreaks in Utah where the highways got more use from wandering White-lined Sphinx caterpillars than from cars. I recall a migration while driving west from Salt Lake City one evening, where over a span of 10 miles several hundred adults flew through the beams of my headlights.

For some nice close-up shots of a WLSM feeding and of a newly-emerged moth pumping up its wings try: Birds-n-garden.