The BugLady can hardly pass by a water lily without taking a picture of it, and she confesses that she sometimes “sanitizes” the leaves somewhat during the editing process, photoshopping out some of the mess of frass (bug poop) and aphid exuviae (shed skins) and holes and discolorations that characterize the leaves of water lilies (especially white water lilies) in mid-summer. She was reminded recently by BugFan Caitlin that water lily plants are the Center of the Universe for an amazing community of critters that live both above and below the leaf surface. Someday she will track the colonization of the leaves from the beginning of the season and write a BOTW about it.

Although they are sometimes (confusingly) called Long-horned Leaf Beetles, Waterlily Leaf Beetles are in the huge leaf beetle family Chrysomelidae, and not the long-horned beetle family. The subfamily Donaciinae (the aquatic leaf beetles) contains five genera and about 55 species (mostly in the genus Donacia, which today’s beetle probably is, too. You’d need a microscope and a higher pay grade than the BugLady’s to determine the species). Donacia comes from donax, which is Greek for “reed,” and they’re called “reed beetles” in Great Britain.

WLBs can be found in “weedy” ponds and lakes and very slow streams all over North America. The adults are leggy, up to a half-inch long, often metallic, with antennae about half as long as their body; they are jumpy and can move fast, and they’re a little camera shy. The layer of silky hairs that covers their undersides repels water in their often-soggy habitats (settle down, there). Find them on the surface of a variety of emergent and floating-leaved plants. Some are generalist feeders and others are plant specialists; some are generalists while the leaves of their favorite plant are still submerged, but they make a bee-line for it when it emerges. Adults enjoy the leaves of water lilies, arrowhead, potamogeton, and water milfoil, some sedges, rushes and reeds, and they may, like this beetle, eat pollen.

When it’s egg-laying time, females of many species of WLB chew a hole in a lily leaf, insert the end of their abdomen, and glue their eggs to the underside of the leaf in concentric arcs—like a mini-rainbow. Some other species accomplish the same thing while perched on the edge of the lily leaf, and a few crawl up the plant stem, while still others climb under the leaf and down the plant stem.

According to a report by Paul S. Welch in the Annals of the American Entomological Society, Vol. 9 (1916), the “aquatic” moth (its caterpillar is aquatic) Nymphula maculalis (the Polymorphic Pondweed moth, really!) takes advantage of the holes excavated in yellow water lily by the female Donacia. The moth also arranges her eggs on the leaf’s under surface in up to six concentric arcs, using the spots around the rim of the hole that are not occupied by beetle eggs. In his study, the author didn’t find a single mass (clutch?) of moth eggs that was not associated with a Donacia egg hole.

The BugLady has never seen a WLB larva (your typical small, whitish, C-shaped beetle grub), probably because most spend their larval lives plugged into a submerged plant stem, never “coming up for air.” How do they do that? The eggs hatch in about 10 days, and the larvae drop down through the water column, typically finding the roots and rhizomes (underground stems) of their host plants in the muck (some also feed on stems and petioles). In the words of Ann Haven Morgan in her Field Book of Ponds and Streams, “When the stems of aquatic plants are broken beneath the water, a flood of air bubbles comes pouring to the surface from the air spaces within them” [that’s why, BugFans, the leaves of floating-leaved vegetation float instead of getting dragged under water—the stems are buoyed up by pockets of air]. “… MacGillivray and others found stems with dozens of little Donacia larvae hanging to them feeding upon the plant tissues, and all breathing air, though they were three or four feet below the surface of the water.”

Pennak, in the venerable Freshwater Invertebrates of the United States, enlarges on the concept. Insects typically breathe through paired pores called spiracles that are located on the sides of the abdomen. In the WLB larva, the only spiracles that are operational are the two at the end of the abdomen, and each of these two pores is associated with a sturdy spine. The larva uses the spines to excavate holes in plant stems, which taps into their inner air pockets, and the air flows out over the spiracles. Pennak notes that both ends of a larva will be imbedded in plant tissue simultaneously. 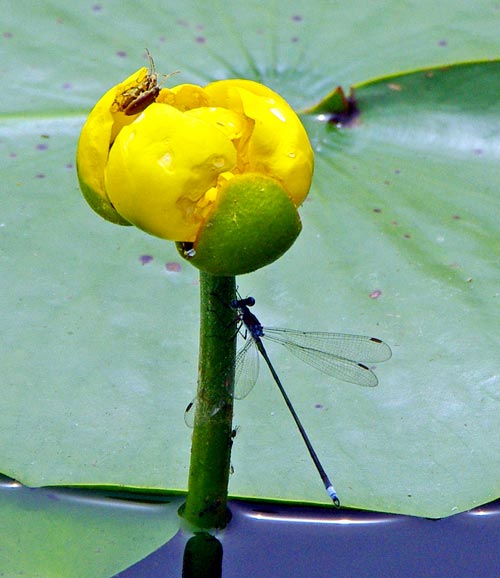 Fast-forward to the day, a few weeks later, when a mature grub is ready to pupate. Using silk produced by glands in its mouth, the larva creates a waterproof cocoon near where it has been feeding. How do you build a dry haven when you’re under water? You tap into the same air, present in the plant tissues, that has been sustaining you as you feed. You snug your cocoon up against a stem and cut holes through it and into the plant and you allow air to leak in. As the final touches are being put on the cocoon, the water has been driven out. O little engineers!

Although it develops into an adult fairly quickly, the WLB aestivates inside its cocoon until it emerges at the beginning of the next summer. In a study of a European Donacia, researcher Christian Otto suggested that this arrangement may help the beetle avoid periods of low dissolved oxygen concentrations or may help the beetle time its appearance with the start of the growing season. When it’s time to exit, the beetle breaks through the cocoon’s tip, carrying enough air under its elytra (wing covers) and belly hairs to sustain it on its trip to the surface.

BugFans—Don’t forget to tune into the virtual habitat at the Firefly Watch website and watch the fireflies flicker, and then go out and see how many species you can identify.
Beetles