January continues to be “Vocabulary Month.”

The BugLady likes her wetlands wet, not solid, so she’s diving into her files of aquatic/semi-aquatic organisms in order to evoke the sights and sounds and feel of a summer day. As usual, this has resulted in a few scenic side trips.

Scenic side trip #1 – what are all those fantastic aquatic organisms doing in the dead of winter, anyway? Invertebrates have three options here in God’s country – migration, diapause (suspended animation – hibernation for the cold-blooded) and termination. Most insects overwinter as eggs (ready to hit the road when the weather warms) or as pupae (ready to assume an adult form when the weather warms). A smaller number spend the winter as nymphs/larvae or as adults. Some aquatic invertebrates spend their whole lives in the water, but for others, water is a nursery that they occupy only as immatures. Both permanent and temporary residents are found under the ice or in frigid streams in winter.

Water is, at once, both a hospitable and an inhospitable place to live. It changes temperature slowly, so its inhabitants don’t experience the dramatic fluctuations felt by those of us who live in the air. Water temperatures under the ice are typically about 37 degrees F, often much warmer than the air above. But, ice overhead excludes new oxygen, and a snow cover keeps out sunlight, as well, so submerged plants don’t photosynthesize and add oxygen to the system. Streams may not ice over, which means they are more oxygenated, but colder.

Ice crystals are harmful/lethal to an organism’s cells, and cold-blooded aquatic invertebrates avoid them via both behavioral and physiological adaptations. They become inactive, some build shelters, and some drift down to the deepest, “warmest,” part of a pond. Aquatic invertebrates are freeze-resistant at the cellular level – able to be “supercooled” to about 22 degrees F without having ice crystals form in their tissues because they have eliminated small particles that would serve as the nucleus of an ice crystal. Some are even freeze-tolerant. 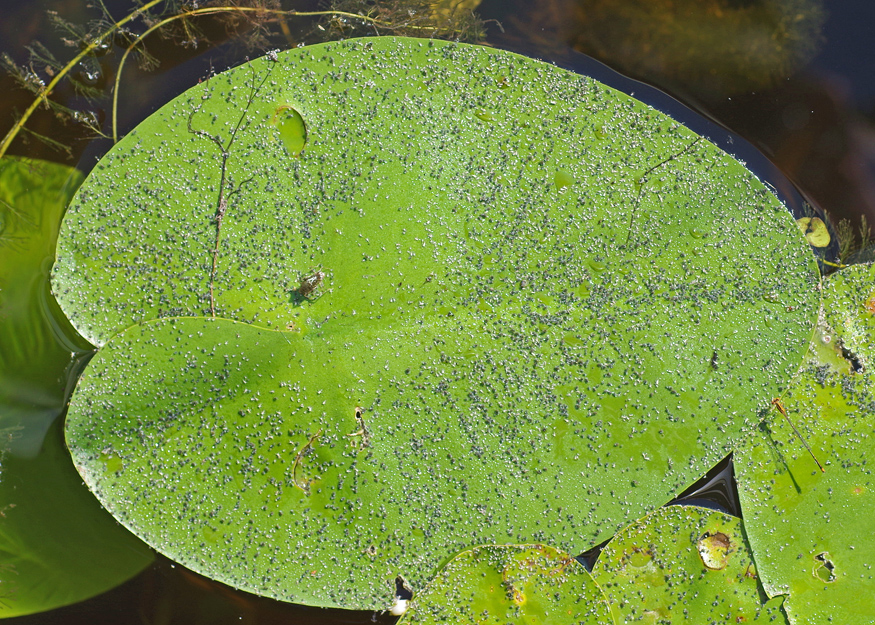 WATERLILY APHIDS (Rhopalosiphum nymphaeae) have an alternative plan for winter, which we’ll get to in a sec. Hint – it has something to do with their other common name, the Reddish-brown plum aphid.

The family Aphididae is a big one – about 5,000 species (1,300+ in North America), many of which are considered pests. WLAs are not from around here (their original range is northern Eurasia); they were first recorded in North America in 1890, but now they occur globally except for some really cold spots. They’re often referred to as “adventive,” a word whose definition ranges from “non-native” to “recently introduced and starting to spread” to “introduced but not really naturalized, not able to sustain their population without help.” 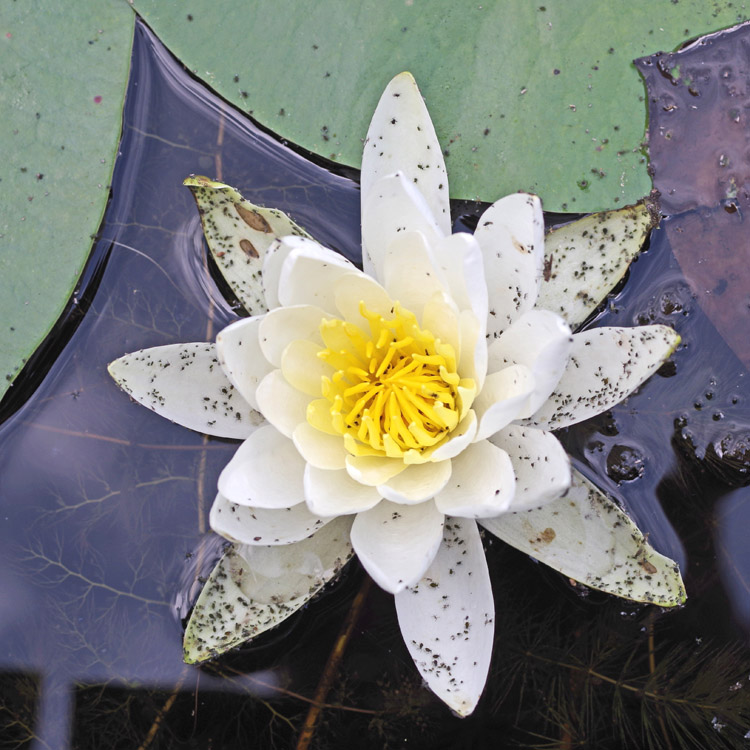 WLAs don’t look like they need any help. They can be seen, sometimes in spectacular numbers, on the flowers and floating leaves of both white and yellow water-lilies. Despite their name, they chow down on quite a variety of aquatic plants including duckweed, arrowhead, water milfoil, water plantain, cattail, bladderwort, Potamogeton, and rice. They are at home above the water and below it, using hairs on their bodies to trap/carry air when they submerge to feed; and they can hike along on the surface film to get to new food plants. 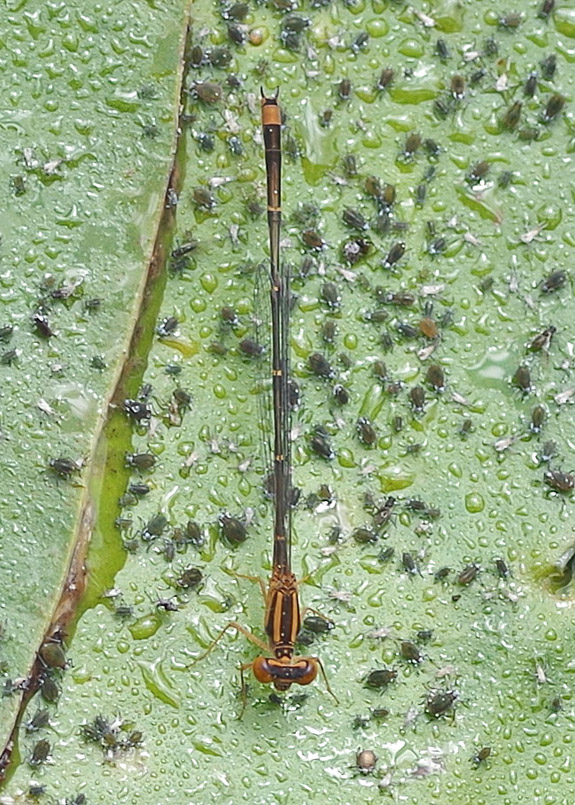 They are preyed on by the usual suspects, like ladybugs, syrphid flies, and some parasitoids, all of which experience population booms when large numbers of WLAs are around. While it is true that dragonflies and damselflies will hover and pick off perched insects, the BugLady isn’t sure if this Orange Bluet is taking advantage of the little bits of protein that surround him. But, she has no doubt that the wasp is collecting aphids to feed to larval wasps. WLAs are so very fruitful that some authors consider them important “shapers” of aquatic habitats. 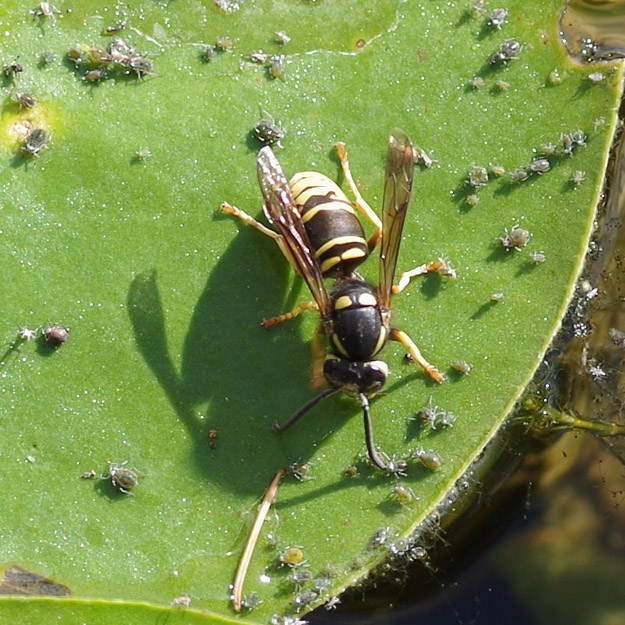 Other than the fact that they’re semi-aquatic, the lives of WLAs hew pretty much to the general aphid game plan. They’re found on water plants during the summer, wingless females producing more wingless females by parthenogenesis (virgin birth), a system so effective that their population can double in less than a week (she’ll crank out about 50 offspring in all, popping out two to four per day). Literally “popping out” – the young are produced in eggs, but the eggs hatch internally (it’s called ovovivipary). The nymphs mature in a week or so and become mothers themselves (one researcher used the delicious term virginoparous, which refers to a wingless female aphid that was produced by and is, herself, reproducing by parthenogenesis). 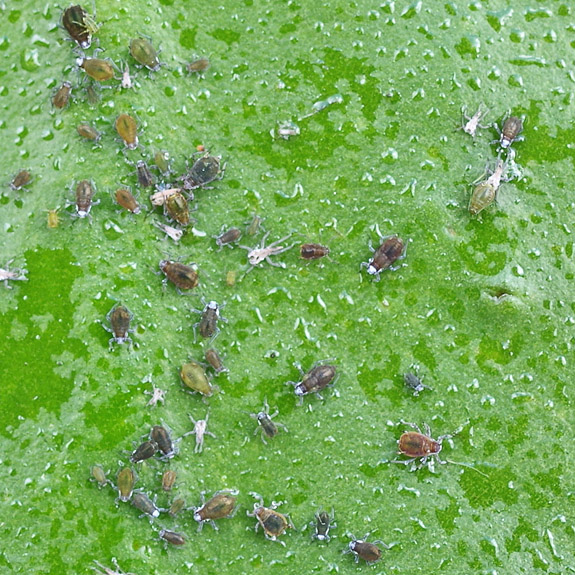 As cold weather approaches, there is a winged generation that includes both males and females. They fly away from the water, boy meets girl, gene pools are shared, and females lay eggs in bark crevices on a fruit tree like a peach, plum, almond, or cherry. When they hatch in spring, the nymphs (all female) feed on petioles and fruit stalks, attended by ants (myrmecophily) – and are known as Reddish-brown plum aphids. The tree is dubbed the primary host, because the eggs are laid there, and the aquatic plants that they feed on in summer are considered secondary hosts. 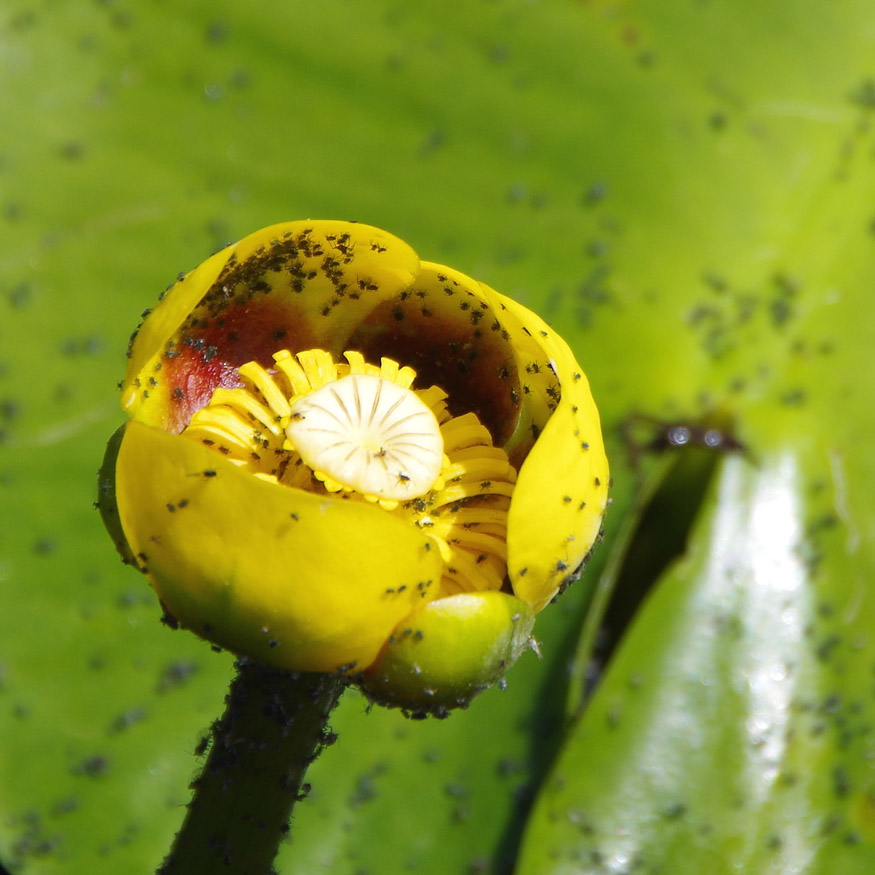 Googling the WLA results in a bunch of hits that demonstrate that beauty is, indeed, in the eye of the beholder. WLAs can transmit a number of plant viruses in either stage of their life cycle, and they are considered pests on some plants but are cheered on as biological controls of problem plants like water hyacinth and duckweed.

Scenic side trip #2 – the BugLady found a number of articles with contradictory views about WLAs and a plant called Azolla, as in “Good news, there are WLA-resistant strains of Azolla!” and “Good news, you can use WLAs to control Azolla!” Azolla?? Turns out that Azolla, a.k.a. pond fern, duckweed fern, water fern, and mosquito fern is an actual, floating aquatic fern. There are a dozen or so species – two listed in Wisconsin, both on the “watch list” due to their scarcity.

Because their associated cyanobacterium fixes nitrogen, needed for plant growth, mosquito ferns can spread like crazy and cover/choke the water surface. The mistaken belief that a solid blanket of Azolla prevented mosquitoes from ovipositing led to that common name, but a thick layer of Azolla probably does make it difficult for mosquito larvae (and some other insects) to get to the surface film. Because of the way it covers the water surface, it acts as floating mulch for rice crops and then as fertilizer when it sinks (and it has been used in this way for 1,500 years). Azolla is grown in some parts of the world as a nutritious livestock feed, and it has been suggested as a food for humans, but there are some questions about long-term safety (neurotoxins).

Interesting Azolla story – apparently, about 50 million years ago, give or take, the greenhouse effect was in full swing and the climate of the North Pole was tropical (think palm trees), and large areas of the Arctic Ocean (which was then more fresh than salt) were covered by Azolla. For a million years, masses of Azolla used a lot of CO2 – half of the available CO2 of the time, by some accounts – and when the plants died and sank, they took all that carbon along with them, which reversed the greenhouse effect and initiated an ice age. It’s called the Azolla Effect! An interesting little plant that the BugLady had never heard of. For more about Azolla, check out the Nordic Folkecenter and the article from the Scientific American.

The BugLady confesses that she doesn’t specifically set out to photograph WLAs up close – usually she’s hanging off a pier by her toes aiming her camera at something bigger; check out these images for some great close-ups. The white markings around the thorax of mature WLAs are waxy flakes that are produced by the aphids. E. O. Essig, in Aphididae of Southern California (1912) says that the “ventral surfaces of the thorax, head, antennae, and legs are covered with rather long, white flocculence. This is secreted on the lower surface of the thorax and is evidentially gathered up by the appendages coming in contact with it.”