The long (about 2″), lean, well-camouflaged Brown Water Scorpion (Ranatra fusca [probably]) is in the order Hemiptera (half-wings), referring to fore-wings that are membranous at the tip and leathery at their base, and thus can legally be called a “bug.” Hemipterans have simple/incomplete metamorphosis, looking when they hatch pretty much like they will as adults, adding a few parts (the wings and the “naughty-bits”) as they mature. Both immature and adult water scorpions live in the same habitats in ponds and streams, and both dine on “bug juice.” Despite their resemblance to the terrestrial herbivorous walking sticks, the carnivorous water scorpion ambushes aquatic invertebrates like backswimmers, spotting its prey with protruding compound eyes, nabbing it with long, mantis-like front legs, stabbing it with a short beak (which is also capable of piercing human skin) and injecting tranquilizers and tenderizers. 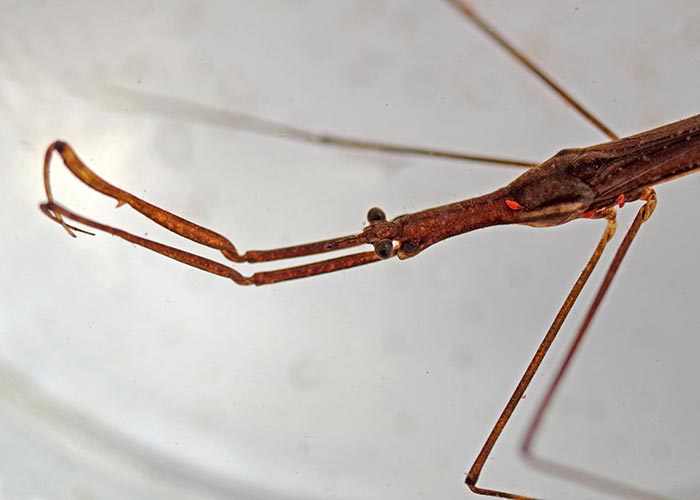 They hang out, usually head-down, on aquatic vegetation and in the detritus just off-shore;their passage through the water is sloth-like, and swimming is not their forte. In fact, in A Guide to Common Freshwater Invertebrates of North America, J. Reese Voshell, Jr. says that water scorpions are so sedentary that not only do algae and micro-invertebrates form colonies on them, but other aquatic insects may deposit eggs on them! This immobility is part of their “stealth” hunting tactic. They are equipped to fly, and fly they do, but not often, and they must spread and dry their wings before take-off. They are known to bask in the sun (and take your pick: some references say they fly only at night, but others say they fly during the day).

The two long filaments on their trailing end are not stingers (a nod to the “scorpion” part of their name); they lock to form a breathing tube, the tip of which the bugs position just at the air-water interface. They can store air in their thorax when they want to go deeper than their “snorkels” will reach (and the structure of the filaments doesn’t allow water to enter). Their eggs, which are laid in submerged vegetation or in damp spots, like moss, near the water’s edge, also have respiratory filaments which protrude from the egg! 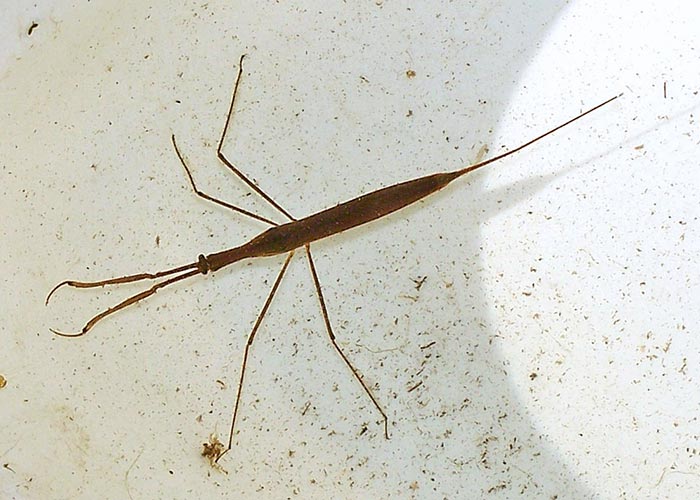 Water scorpions overwinter as adults, under the ice, equipped with a chemical defense against freezing.

Astonishingly, water scorpions stridulate (they produce sound by friction). In this case a leg segment is rubbed against the thorax, making noise underwater.Sometimes a faint squeak can be heard from water scorpions that are pulled from the water.