First-time observers of the underwater world are startled to see tiny, bright-red dots wallowing around underwater. These critters are water mites, wee spider relative in the phylum Arthropoda and the alass Arachnida. There are some 1,500 species of fresh-water-dwelling mites in North America. Superficially, they look like spiders, but spiders have two body parts, a cephalothorax (combined head and thorax) and an abdomen, and the one-piece water mites are further fused and are unsegmented. 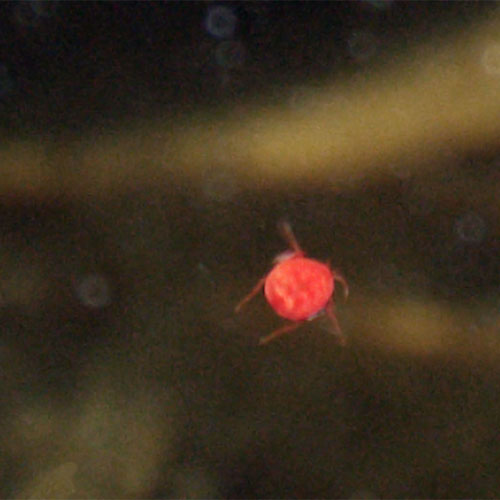 Other physical characteristics include two double eyes (some species have an additional third eye in between) and eight legs (most of the time). Species that live in streams tend to be drab, not red. Still-water water mites are adorned with hairs on their legs—a light-weight way to increase the surface area for swimming; mites that live in running water have strong claws instead, so they can grab the substrate and resist the current. Water mites can also be seen “walking” along on the pond floor and on submerged plants. If they stop swimming, they sink.

Water mites get air from the water they live in, absorbing dissolved oxygen through their skin, and they can live in waters that are very low in oxygen. They’re usually found in the shallows of lakes, ponds, marshes, swamps and bogs, but some live as deep as 100 meters and others call ephemeral/vernal ponds home, burrowing into the mud when the water dries up. They are found in open water under the ice in winter. Prime water mite habitat may contain as many as 2,000 mites per square meter.

The ranks of the water mites list a few scavengers and a few cannibals, but, like true spiders, most adults are carnivores that grab their prey (crustaceans and immature insects tinier than they are), pierce them with their fangs, suck the juices from their bodies (the waters seem thick with body-juice-suckers these days), and then discard the skin and roughage. They are, in some reference books, enthusiastically consumed by fish, aquatic insects and hydras (the BugLady is confident that you recall your high school encounters with these tiny, transparent, somersaulting tree-guys). Other sources report that they taste bad and that predators learn to avoid them.

It is their childhood that is mind-boggling. Eggs are laid in and on the neighbors—mussels and aquatic insects. Immediately following egg-hood (where the pre-larva lives), the (six-legged) larva attaches to insect nymphs like stoneflies, dragonflies, true bugs, and flies and goes through a parasitic phase (the BugLady has slides of water striders with small water mites attached). Still attached to its host, the larva becomes a protonymph, and the protonymph turns into a deutonymph within the larval skin or nymphochrysalis. After a free-swimming, carnivorous stage, the deutonymph becomes a tritonymph within the imagochrysalis and the BugLady promises never to talk like that again. The bottom line is that, having boarded them while both resided in a watery habitat, the mites still inhabit and can mature inside their aquatic insect hosts as they mature into aerial adults (“packed inside the exoskeleton in great numbers” says Elsie B. Klots in The New Field Book of Freshwater Life), but enough of these inadvertently air-borne water mites are able to return to water to ensure a next generation. Female mosquitoes may not feed or lay eggs if they have too much of a mite parasite load. 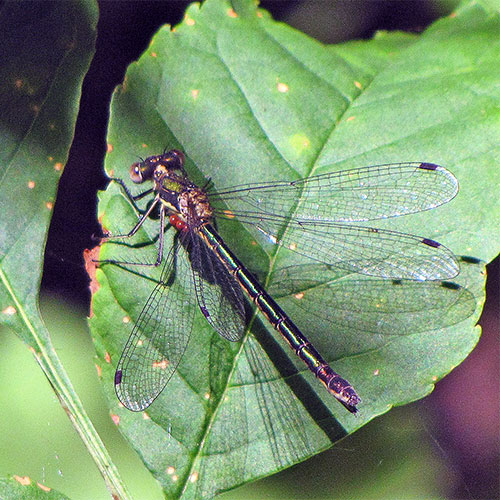 In Summary: What’s not to love about a vivid, minuscule, aquatic parasite-predator spider kin who sucks out the very essence of its prey and whose life history encompasses egg, pre-larva, larva, protonymph, deutonymph, tritonymph, and adult.

It’s February, and the BugLady needs to sit quietly under one of those full-spectrum light bulbs.