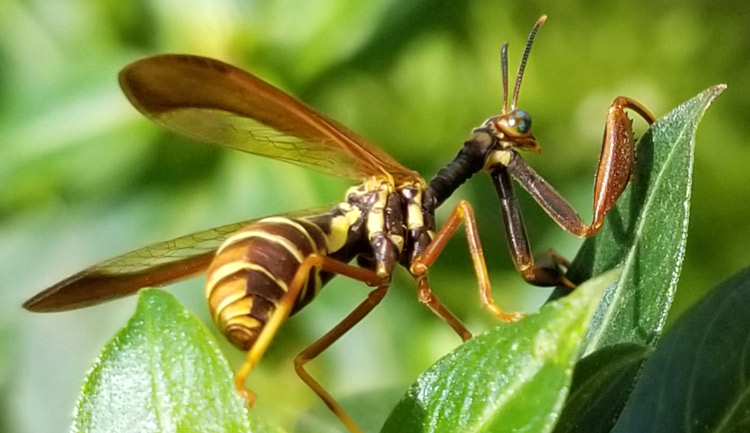 A number of years ago, BugFan Tod sent the BugLady a “what-is-it” picture of a mantisfly on a door-jamb, and she confesses to feeling a twinge of envy. This fall, BugFan Tom shared this shot, taken by his wife Andrea, and the BugLady got a little greener. She seriously wants to see one of these curious insects. 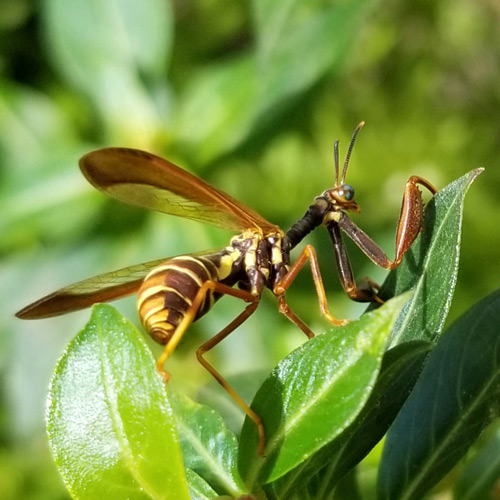 Mantisflies/mantidflies, family Mantispidae, are in the order Neuroptera (“nerve wings”), a very cool order that includes antlions and lacewings, plus owlflies and a few other dynamite groups. Neuroptera has been pared down – the order used to include the dobsonfly bunch and the snakefly bunch, and back in Linnaeus’ time, dragonflies and damselflies, too. Neuropterans’ four, conspicuously-veined, oval-ish wings are about equal in size, and they have conspicuous eyes, long antennae, and biting/chewing mouthparts. They’re clumsy flyers. They are one of a few primitive groups that develops by complete metamorphosis (egg-larva-pupa-adult). While adults may eat nectar and/or their fellow invertebrates, their larvae are mostly carnivores. More about that in a bit.

Wasp/Brown Mantidflies (Climaciella brunnea), in the subfamily Mantispinae, are found in open areas and edges from Costa Rica to southern Canada. They’re about an inch long, and Eaton describes them thus: “In the case of C. brunnea, the body form has been further modified to look like a paper wasp. The resemblance is uncanny. The base of the abdomen is constricted into a ‘wasp waist,’ and the wings are rotated such that they fold over the back instead of pitched ‘roof-like’ as in other mantispids. Even more amazing, the leading edge of each wing is darkened, to resemble the longitudinal fold in the wings of vespid wasps. When startled, the Wasp Mantid even splays its wings like an agitated paper wasp.”

Here are views from several angles:

Because they’re such good mimics, Wasp Mantisflies are probably overlooked frequently (especially by the BugLady). They come in five color phases, and each matches a Polistes (paper) wasp that’s found within its range.

Here are some of the color phases along with the associated wasp:

Batesian mimicry is mimicry wherein an animal that is edible disguises itself as something that is either noxious or harmful, benefiting from its doppelganger’s reputation.

They are generally solitary, but in spring, when a young mantidfly’s fancy turns to love, he releases an aggregation pheromone that attracts females. Mafham and Mafham, in The Encyclopedia of Land Invertebrate Behaviour, tell us that pheromones help the male to distinguish his potential mate from its look-alike wasp;

“The male C. brunnea broadcasts an olfactory message that can only be deciphered by the correct recipient. He produces a very strong pheromone that can easily be detected as much as 3m away. This presumably accounts for the aggregations of females sometimes noted around males. During courtship, the male merely raises and lowers his wings, while rowing with his front legs. Copulation lasts as along as 24 hours, during which he attaches a white spermatophore to the female. She carries this around for 24 to 36 hours, during which time it is gradually absorbed into her body.”

(Here, according to the captions, is a spermatophore being carried by a male). Males live for just a few days, but females live for a month or more.

She lays her eggs – as many as 3,000 of them – on low stalks and leaves, and the larvae that hatch undergo a process called hypermetamorphosis. Larvae of most insects don’t change much after hatching; they just eat and grow until they are mature enough to pupate. The larvae of Mantidflies in the subfamily Mantispinae (along with those of a few beetle and fly families) emerge as active, long-legged super-larvae.

Why? Because they are parasites, and Mom hasn’t provided for them, so it’s up to them to find their own food. In the case of the Wasp Mantidfly, the robust and mobile youngsters drop to the ground and look for passing wolf and other ground-hunting spiders. They are far more common on wolf spiders than, say, on crab spiders that dwell in the flower tops.

When it locates a female spider, a larva climbs aboard and rides along (this hitchhiking is called phoresy) and waits for the spider to make her egg case. If its spider is a male, the larva will jump ship when he mates, and there may be a little wear and tear on a spider that doesn’t spin an egg case in a timely manner. Sources generally agree that the larva’s mouthparts don’t allow it to chew into a finished egg case, so it must slip inside as the case is being spun. Once it’s sealed inside, it eats the contents of the spider’s eggs; once inside, it doesn’t need its long legs to get around anymore, so subsequent larval instars (stages) look more grub-like. Eventually, it pupates inside the egg case before emerging as an adult.

Adults feed on nectar and on small insects like flies and moths that visit flowers and that they grab like a mantis does. Sometimes they hang on the undersides of flowers (note to self – a wasp under a flowers may not be a wasp).

Here’s Eric Eaton’s full article, and here’s a nice article about a mantidfly from a different subfamily, with a video of a mobile pupa that’s walked up a trunk to emerge, and the newly-emerged adult sipping something from the mosses/leafy liverworts.

See this page about a Mantis fly with a walking pupa that climbs trees before hatching.

Such a cool insect……

Pollination research at the Field Station