As she was walking through a grassland recently, the BugLady looked up and saw five dragonflies zooming back and forth about eight feet above her head. It was a small static or feeding swarm (more about that later) made up of four Black Saddlebags (Tramea lacerate), and one Wandering Glider (Pantala flavecens). 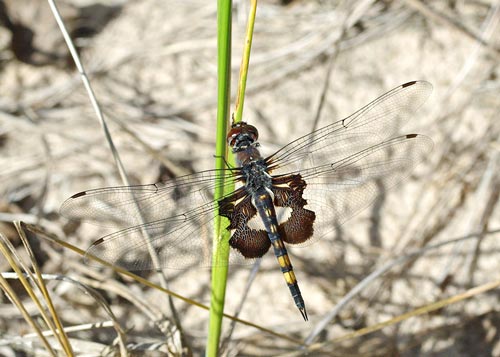 Wandering Gliders are in the Skimmer family, Libellulidae, a large family that boasts some pretty showy members. There are only two species in the genus Pantala, and these big-winged dragonflies are called “rainpool gliders” because they often lay their eggs in temporary/seasonal ponds. The WG is well-named in both English and Latin (and a smattering of other languages)—Wandering Glider, Golden Glider, Globe Skimmer, and the German Wanderlibelle allude to its impressive meanderings; pantala means “all wings,” and flavescens refers to the dragonfly’s yellow hue. The BugLady thinks that this golden creature is one pretty spiffy-looking dragonfly, and she takes exception with the blogger who says that if a person is going to study dragonflies, they could come up with a nicer-looking dragonfly to study!

WGs wander. They are considered the most widely-distributed dragonfly species, and because of that have been featured on postage stamps around the globe. Found on 6/7 of the earth’s continents (no dragonflies in Antarctica), they occur between 40 degrees north and 40 degrees south latitudes, in areas where there is seasonal (not constant) rainfall. They are found near temporary, even brackish, ponds and very slow streams (and flying over grasslands). Their range in Wisconsin is erratic, with records from the far northwest and southeast corners, and from a leapfrog line of counties running north-south through the center of the state.

WGs wander, and it’s been proposed that wander is a better term for what WGs do than migrate, which refers to more predictable routes and timing. They travel to find suitable breeding habitat. Wisconsin waters are too cold for their naiads to overwinter in, so WGs move into the state from the south in summer to breed, and their offspring fly south in fall, leaving no eggs or naiads in Wisconsin waters. About 16 of the 325 North American dragonfly species migrate.

It’s not surprising that these superb aerialists mate in the air. After mating, they fly, and often oviposit, in tandem. There are many reports of WGs unfortunately mistaking the shiny surface of a car for the shiny surface of a pond and depositing eggs on it. Females may mate daily and may produce as many as 2,000 eggs, pushing them one-by-one, through the water’s surface film.

WG naiads are active, ravenous foragers that dine on the usual variety of aquatic insects, tadpoles, and fresh-water shrimp. Their out-in-the-open feeding technique makes them more vulnerable to predators themselves, but the temporary waters they occupy usually do not contain predatory fish. In order to escape a seasonal pond before its water evaporates, WG naiads telescope their development into five to eight weeks. If the water dries up before they mature, the naiads (at least the early-stage naiads) survive by hunkering down in the drying mud, awaiting the rain. One source said that when they are ready to emerge as adults, WSs do so in synchrony with the rest of their cohort. Adults live a few months. 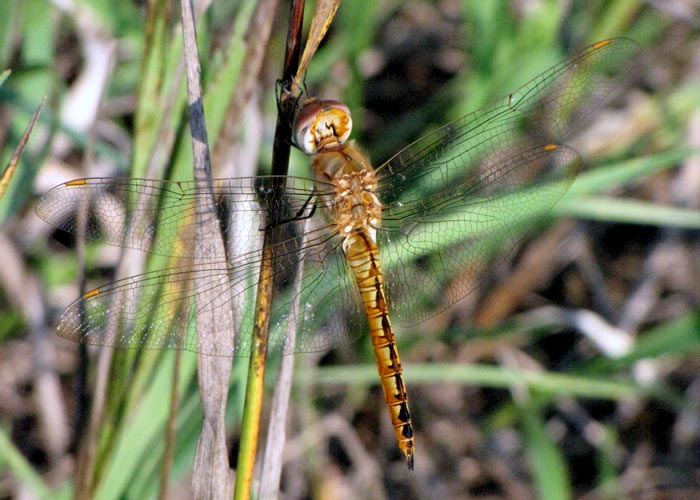 They feed in the wing, too, harvesting “aerial plankton,” snatching small insects out of the air. Their feeding swarms are the stuff of legend—one such gathering covered 13 square miles. Both males and females participate in the swarm, as do other species of dragonflies. When they land, they usually perch vertically, low on the vegetation.

WGs wander, seasonally, in large groups (swarms). Migratory WGs may maintain an altitude of about 15 feet above the ground, or they may take advantage of thermals (rising columns of warm air). Their speeds have been clocked at 5 meters/second (the BugLady fondly recalls grade school math in the ‘50’s, when the nuns assured us that we were learning the Metric System because the U.S. was going to convert to metric, any day now). They’ve been recorded in the Himalayas, passing oil rigs in the Gulf of Mexico, landing on freighters hundreds of miles offshore, and in great numbers along coastlines. Their journeys across the Indian Ocean net them twice the Frequent Flyer miles that Monarch butterflies accrue on their annual migrations to Mexico. Unlike other dragonflies, they are not deterred by rain and wind; fat reserves stored in their abdomens fuel their long-distance flights.

Dragonfly swarms have been observed for a long time, but they are still not well understood. There are two types of swarms—static/feeding swarms, in which a group of dragonflies flies back and forth over the same turf for a while, hunting, and migratory swarms , in which many individuals stream past the same point.

Because of their behavior and adaptations, WGs are considered to be the most highly evolved dragonfly.