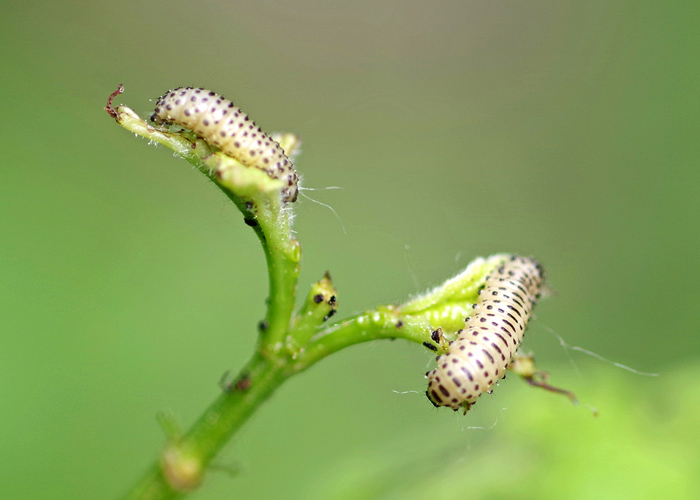 It’s quiet now, but the Viburnum leaf beetle (Pyrrhalta viburni) is slowly chewing its way across southern Wisconsin. It has followed the general invasive species template – establishing small, often undetected populations and staying below the radar for years, its spread (unwittingly) aided by human activity. Once we know we know it’s here, it has already reached numbers that are difficult to control.

Originally from Europe, the VLB made landfall in Canada in 1947 (two sources said Nova Scotia in the 1920’s) and breeding populations were recorded there in 1978, in Maine in 1994, and in New York State in 1996. The first few VLBs seen in Wisconsin in 2009 were eliminated, but they popped up again in 2014 and presently have a foothold in a half-dozen counties. They were found in Minnesota (2019) and in the Pacific Northwest. 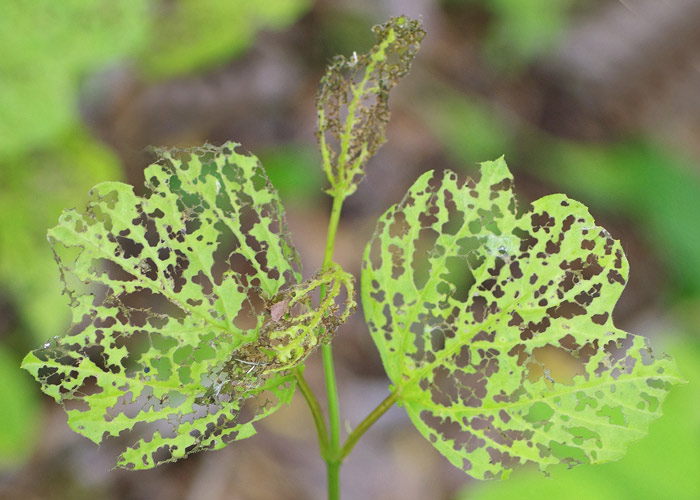 Its life history is similar to that of many of its family members in the leaf beetle family Chrysomelidae. It targets a narrow range of host plants – in this case, as its common and scientific names imply, shrubs in the genus Viburnum. The larvae, concealed on the undersides of leaves, skeletonize them by eating the tender tissue between the tougher leaf veins, while the adults simply bite holes in them. Heavy feeding can kill a shrub.

They are eaten by ladybug adults and larvae and by lacewing larvae and some predaceous stink bugs.

In late summer and early fall, a female chews a row of pits into the bark near the tip of a viburnum twig, deposits several eggs in each (she can lay as many as 500), and covers them with a mixture of excrement and masticated bark, glued together by mucous. It’s an unappetizing but effective mix that deters predators, but it also retains moisture and thus provides the eggs with humidity that keeps them from drying out in winter. Heavy ovipositing can cause twigs to break. 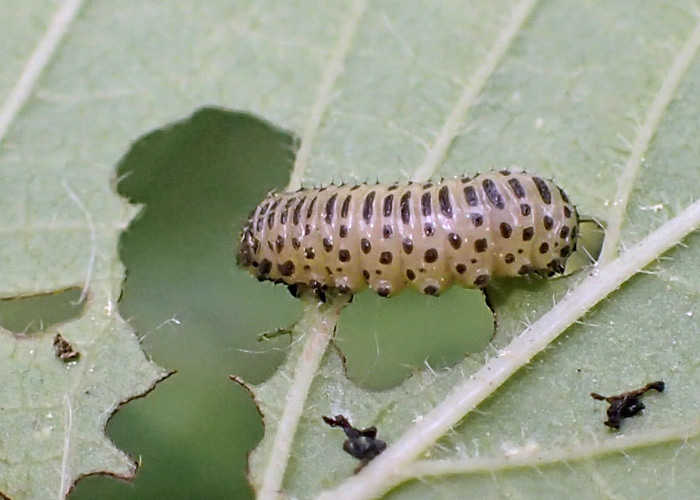 The eggs hatch in spring as the new leaves are emerging. When they have eaten enough, the larvae crawl down the trunk and pupate in the soil, emerging about 10 days later as adults.

VLBs have followed the general invasive species template, but there are several interesting twists in their story.

First, according to an article by Cornell University researcher Krishna Ramanujan, researchers Anurag Agrawal, et al, “found that there were at least three events, millions of years ago, where Eurasian viburnums colonized North America. During each of those events, a single colonization diversified into several North American species, but without a predatory beetle putting adaptive pressures on them.” 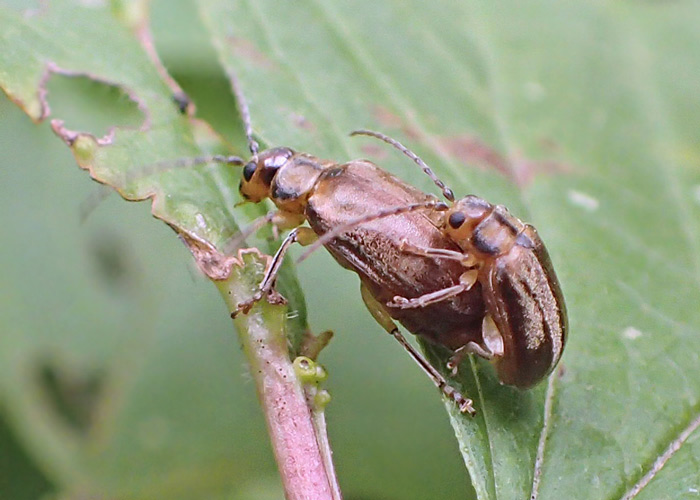 Second, we always think of an invasive species’ success as being due to freedom from its hometown predators, but Ramanujan points out that the European viburnum species that stayed at home, exposed to the VLB, devised defenses that the American-made species were not stimulated to develop. He writes, “Meanwhile, European viburnums continued to evolve with such beetles and developed a defense strategy: The female beetle lays her eggs in twigs in summer, but they don’t hatch until the following spring. During that time, the twig tissue of European viburnums grows over the eggs and crushes them. He quotes Agrawal “This remarkable form of plant behavior seems to be a very effective defense.” Agrawal goes on to say that “our native viburnums are like candy for the beetles.”

[Nota bene – The BugLady is of a sufficient age that plants were defined in her science courses as organisms with, among other things, no sensory system and therefore no ability to either receive or to act upon stimuli. The words “plant” and “behavior” were not used in the same sentence. O Brave New World!]

For the full article, see this article from Cornell.

And third – Global Climate Change to the rescue! It turns out that VLB eggs need to be chilled – for about five months – in order to be viable. Southern BugFans may never have to deal with VLBs, and conditions could become less hospitable in the middle of their range. On the other hand – Northern Wisconsin – batten down the hatches! 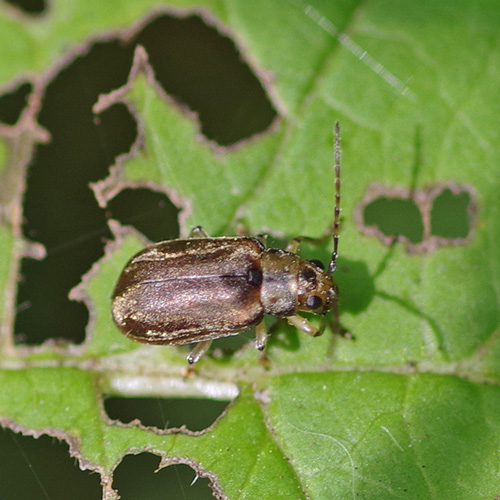 The BugLady doesn’t usually get into control methods, but an effective strategy is to check viburnum twigs in fall for the tell-tale caps of the egg sites and prune afflicted twigs off the shrub. Scroll down for a picture of a twig with egg cavities. Remember – spraying often kills potential predators as well as their unwanted prey, so go easy on the chemicals.

Arrowwood (Viburnum dentatum), Possum haw (V. nudum), European cranberry-bush (V. opulus) and American cranberry-bush (V. opulus var. americana, formerly V. trilobum) are on the VLB’s list of “USDA prime” viburnums, so buy resistant species for your landscapes. One of our local nurseries has been happily selling the more delicious species of viburnums to a friend of the BugLady’s without mentioning that they are doomed. Caveat emptor.