The BugLady has expressed her admiration for weevils on other occasions. With some 40,000 species worldwide (3,000 in North America), they are the largest family in the largest order of insects (Coleoptera, 400,000 species). Of course, with that many diverse species, their taxonomy is constantly being reviewed, tweaked, and fought over.

Weevils, family Curculionidae, have cute little down-curved snouts with antennae located part way down towards a tip that bears the chewing mouthparts. The snout (rostrum) allows weevils to feed on plant material that is protected by tough coverings, and it also allows Ms. Weevil to lay her eggs inside of various plant parts. Some insects bore a hole with their ovipositor and lay their eggs with same; weevils chew a hole with one end and deposit the egg with the other. According to Eaton and Kaufman, in their Field Guide to Insects of North America, some other insects also sport snouts, but a true weevil’s elbowed antennae are also distinctive (primitive weevils have straight antennae and snouts). Eaton and Kaufman also mention the scales that coat many weevil species, scales that wear off in time and cause an individual’s appearance to change as it ages. Weevils range from tiny (1/16 inch) to more than 1 ½ inches long.

Almost all weevils are plant-eaters; rare indeed is the plant that does not know at least one species personally, and lots of weevils are named after their favorite foods. Many weevils are considered plant pests so it should come as no surprise that they have PR problems. One site starts with “Is the Weevil Really Evil?” (FYI, Googlers, there’s a musical group called Evil Weevils), and the “Animal Planet” site’s entry begins with “Weevil, a tiny beetle that does enormous damage to growing plants and stored grains.” For the record, some weevil species are used as biological controls of unwanted plants.

The BugLady thinks that this is a cattail billbug (Sphenophorus australis; Sphenophorus means wedge-bearing) because of the orange streaking in the grooves on its thorax and abdomen (and there it was, sitting on a sedge along a boardwalk). As its name suggests, the CB is found on cattails, reeds, sedges and other monocots in wetlands. Happily, the CB has been reported as feeding on the roots of that aggressive wetland plant Phragmites australis. 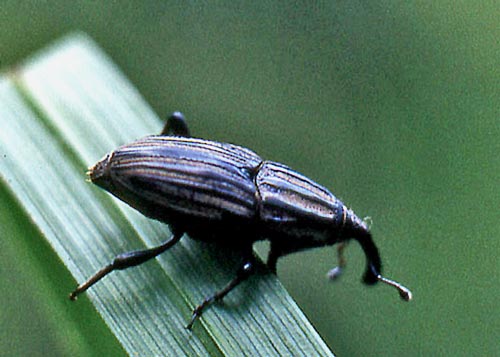 Billbug (what a great name) is a generic name for about 65 species of weevils in several genera in the New World and still more in the Old. The snout is described as “elephant-like.” Birders will be happy to hear that there is a Curlew Billbug whose rostrum reminded someone of the downcurved bill of those birds. Some species of billbugs are infamous for chewing on the leaves of turfgrasses (the adults) and boring into tufrgrass stems and roots (the larvae).

Female billbugs make small holes in plant stems, into which they lay their eggs. The larvae spend their larval and pupal stages hidden inside the plant’s stem/root, where a certain number of diseases and parasites still find them (but not pesticides).

The rhubarb curculio (probably Lixis concavus) is an American (mostly Eastern) weevil that is now found in the United Kingdom. Members of the genus like open spaces, especially around water. Bugguide.net guesses that Lixus means ash-colored/covered with ashes. 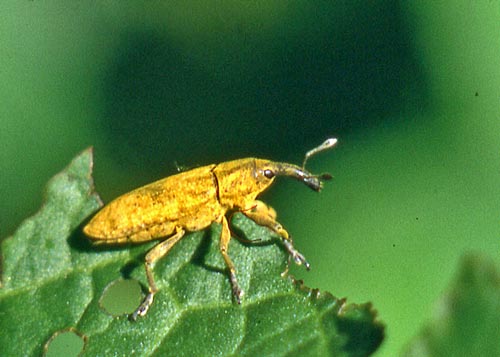 Eaton and Kaufman describe the 69 North American species of Lixus as large, cylindrical weevils. The American Insects website says that the striking, half-inch RC is “covered with both a short gray pubescence and an orange bloom” (when the bloom is off the weevil, it looks black). It has club-tipped antennae and its abdomen is tapered toward the stern.

RC larvae feed in the stems of some composites like sunflower and thistle, in curly dock, and in rhubarb. (Not to worry, says a Cornell bulletin, “rhubarb is a hardy perennial that is not usually seriously affected by insect pests.”) The adults feed on rhubarb and the larvae enjoy it too, but rhubarb plants are distinctly unfriendly to RC reproduction. It seems that when RC eggs are laid in rhubarb stems, the eggs are usually killed by the rhubarb sap or squeezed by pressure from the growing plant cells in the stem.

In the stems of friendlier plants, the eggs (laid in holes created by the adult’s feeding) hatch and the larvae start tunneling down to the base of the stem. If a stem contains more than one egg, it’s survival of the fittest—cannibalism rules the day. After excavating an exit tunnel, the larva pupates at the base of the stem just below ground level or in a “gall” on the stem. Adults nibble on stems and leaves for the rest of the summer, and they overwinter in leaf litter around the base of the host plant.

The vocabulary word of du juor is gummosis. When the adult is feeding/creating a hole for eggs on a rhubarb stem, a sticky sap oozes out of the punctures. This condition of having lumps of shiny, sticky sap deposits at wounds on the stem is called “gummosis.”

BugFans enjoy reading about bugs, but here are two insect photographers you might enjoy: The first lives here in God’s Country, and the second was sent in by BugFan Mike.