The BugLady was plying the shoreline of the Milwaukee River at Waubedonia Park recently, looking for dragons and damsels (American Rubyspots everywhere, and Common whitetails, and Powdered Bluets (patriotic Odonates), along with some Amberwings, Ebony Jewelwings, Widow Skimmers and 12-spotted Skimmers. Drop by and catch the show (the BugLady can’t resist throwing in a picture of a male American Rubyspot being spectacular, and another of Powdered Dancer damselflies ovipositing in the floating-leaved vegetation in the river)! What a treat!

She spied a swamp milkweed, and the first rule of bug photography being “Check the flowers,” she ambled over. Paydirt! A little crowd of Petrophila moths were gracing the blossoms. She wrote a BOTW about them 18 months ago, but this seems to be a good time to replay the episode. Enjoy.

The BugLady has two words for you—Aquatic Caterpillar.

In the summer of 2011, the BugLady photographed (badly) a pretty little, long-legged moth on a green-headed coneflower about 10 yards from the Milwaukee River bank at Riveredge Nature Center. She couldn’t find it in her books. In 2012 the moth reappeared–better pictures; still no ID. But recently, while perusing some on-line pictures of Florida moths, she noticed one with a familiar gestalt and tracked down the genus on Bugguide.net. And that’s how these things happen sometimes—by serendipity.

Aquatic caterpillar. Yes, there are moths whose larvae flirt with the aquatic environment by feeding on/in the stems of emergent aquatic plants, but there is also a small group of small moths whose caterpillars live underwater like their not-too-distant cousins, the caddisflies (of previous BOTW fame).

So, meet the Two-banded Petrophila (Petrophila bifascialis, probably, Petrophila means rock lover, and bifascialis means two-banded). Adult Two-banded Petrophilias are found near the rivers and streams in eastern North America that their larvae inhabit. The hind wings of adult Petrophila moths have a row of black/metallic spots that make one spider enthusiast theorize that they’re Jumping Spider mimics (viewed from the rear, the spots are supposed to resemble the flat face and eyes of a jumping spider), but the BugLady doesn’t see it.

The first thing you notice when you start to research this moth is that “the names have been changed to protect the innocent.” Petrophila moths, now listed in the family Crambidae (the Crambid Snout moth/Grass moth family), started out in the family Pyralidae/Pyralididae, and they’ve been through a number of genus names, starting with Cataclysta in 1869. Classification of the Crambids and Pyralids seems to be “Under Construction.” There are a few Crambids that are used as biological controls against water hyacinth and Eurasian water milfoil, but some of the other species are much less helpful.

Under cover of night (or, at least, at dusk) Ms. Two-banded Petrophilias crawls down the side of a rock—sometimes several feet down—into a fast-moving stream, to lay her eggs on the rock face; there are reports of female moths diving into the water to lay eggs on the stream bottom. In order to breathe, she carries a layer of air underwater against her ventral surface. The eggs hatch, and after a free-living first larval stage (first instar), the caterpillars settle down and spin a web enclosure fastened to a rock (the enclosure starts small and grows as they do). Beneath it they feed, scraping algae and diatoms off the rock’s surface with their mandibles. The books say that they resemble terrestrial caterpillars—except for the 120 filamentous “blood gills;” along their edges; the BugLady thinks they look like caddisfly larvae and, from now on, will look twice at the case-less caddisfly larvae she sees.

Two-banded Petrophilias probably overwinter as immature larvae, but there are gaps in the biographies of these very unobtrusive creatures. In spring, they cut away their shelter and weave in its place a pupal case comprised of a waterproof silk cocoon within an outer silk cocoon that has a row of holes at the sides to allow water circulation. The larva cuts a C-shaped slit in the silk before pupating so it can exit as an adult (its mouthparts will have changed). Newly-emerged moths swim (using their legs) or just float up to the air.

Aquatic caterpillars! And then, just when you think that it can’t get any better, enter—the aquatic wasp!

It seems that there’s a female wasp in the Western U.S. (a tiny Ichneumon called Tanychela pilosa) whose offspring are endoparasites/parasitoids on caterpillars of a related moth species named Petrophila confusalis (Confused/Confusing/Perplexed Rock Lover?).

That’s right—she lays her eggs in the abdomen of a Petrophila confusalis caterpillar either before or after it spins its silken shelter (the “naked” caterpillar is more vulnerable, but the wasp can easily penetrate the sheet of silk with her ovipositor).

How does she do it? One suggestion is that she takes advantage of low water when her targets are temporarily exposed on rock faces, but a report in Entomological News in 1998 says that “Emergent rocks may enable ovipositing females to enter streams [the BugLady’s emphasis] and search for caterpillars.” She goes under water both to hunt for larvae and to oviposit in them, grasping the rock as an anchor against the current when she’s below the surface.

Studies suggest that where Tanychela pilosa and Petrophila confusalis overlap, more than half of the Petrophila pupae may have wasps in them. Where emergent rock “on-ramps” are absent, rates of parasitism are lower. 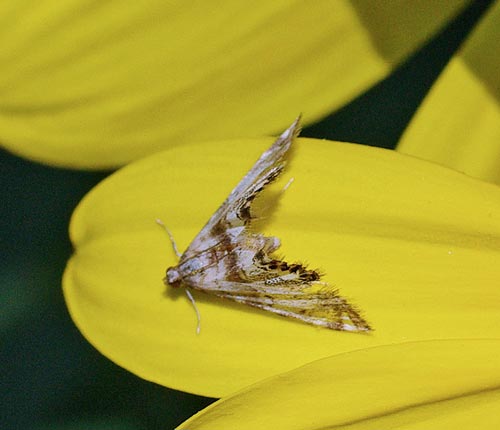 The wasp larva feeds on the Petrophila larva from the inside (endo parasite) and pupates within the moth’s pupal case, under water. The wasp’s feeding strategy is necessarily a tricky one, since its food—the caterpillar—must survive long enough to pupate. Parasitized pupal cases also contain an air bubble that takes up 10% to 20% of the volume of the case. The pupa of a European wasp that parasitizes caddisflies brings air into the case via an air-exchange appendage, but it’s not known how T. pilosa accomplishes this. When it’s time for the newly-emerged adult wasp to exit both its pupal case and the moth’s, it chews through each (ignoring the caterpillar’s pre-cut escape hatch). The air bubble envelops the wasp and floats it to the surface.

A word to the wise: the mud along the riverbank is surprisingly slick .