The BugLady and her camera have been stalking insects since the early 1970’s, and she has thus far escaped relatively unscathed. Oh sure, sometimes in the heat of the photographic moment she overlooks an anthill and the ants know just what to do about that, but she’s never gotten bitten or stung by her subject in the line of duty. Today’s two beetles are biters. There’s oodles of information about one of themmdash;the sap beetlemdash;because its path intersects with ours regularly; the other is one of a legion of anonymous, gray, long-horned beetles.

Sap Beetles (a.k.a. Picnic beetles or Beer bugs) are very sociable. Where people and their foods or beverages or fermented fruits gather, picnic beetles are not far away. The BugLady frequently encounters them picking raspberries. Sap beetles are a bit shorter than ½” with wing covers (elytra) that don’t quite cover the tip of their abdomen and antennae that end in little balls. Their diet gets them in trouble with agriculturalists. The list includes ripe/overripe soft fruit (in which they might also lay their eggs), grains, sap from wounds on trees, mushrooms, and sweet corn (sometimes their noshing blazes the trail for other insects, and sometimes they follow other insects like earworms and corn borers, and they may lay eggs in corn silk). 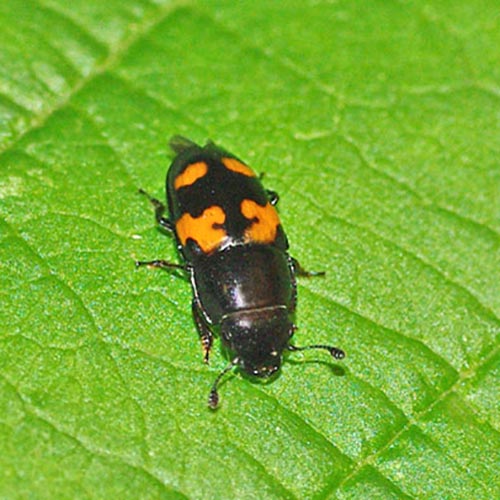 Ms. FSSB overwinters in the soil or leaf litter as an adult, and she lays her eggs (up to 400 of them) near decaying vegetation in spring. Adults emerge in June, and both the beetle population and the damage reports increase throughout the summer. Alas, along with its unfortunate choice of foods, this pretty little beetle is also known to spread several fungi that cause rot in fruit and wood.

For the picnicker or home gardener, controlling FSSBs means borrowing a page from the “Cleanliness is next to godliness” manual. Don’t let fruits rot on the plant, keep garbage pails clean, chug that beer. Traps baited with banana, pineapple scraps, or a combination of stale beer, molasses and yeast seem to attract them for future disposal, but adding pesticides to the mix may also kill non-pest beetles and small pets.

Internet sources state clearly that “this beetle does not bite or sting,” but the BugLady has been nipped by them, as, she is sure, have many BugFans.

For many insect enthusiasts, the Long-horned Beetles are Rock Stars (well, along with tiger beetles and weevils)—anyone who doubts that should visit the 341 pages of Long-horned beetle photos in bugguide.net or note how many photo sites come up when you enter a long-horn’s name. They are in a large family (Cerambycidae) of mostly decent-sized (over ½”) and often brightly-hued beetles (some of the wasp-mimics are amazing), with antennae that may be up to three times their body length. About 20,000 species of Cerambycids have been described world-wide (1,500, plus-or-minus, in the U.S.). 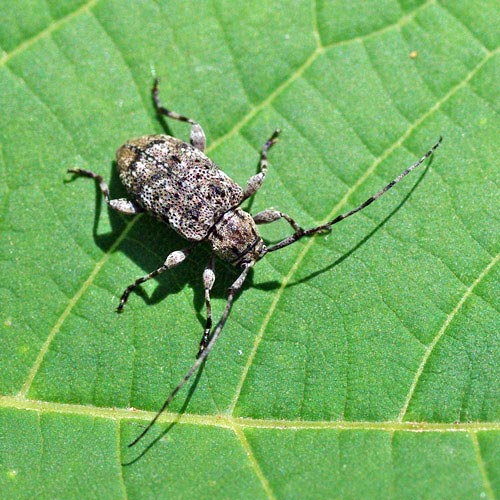 Besides their beauty, Cerambycids are famous for their larvae, which bore into and make tunnels in wood. They prefer dead or dying wood, which makes them both valuable recyclers of woodland nutrients and sometime-pests of cut lumber. Adults of some species add insult to injury by girdling twigs before they lay their eggs (thus ensuring rotting wood for their larvae). Many colorful adults feed on flowers, pollen, or nectar during the day; others are drab and nocturnal, feeding on roots, wood, fungi or leaves.

The family Cerambycidae is divided into a bunch of sub-families, one of which is Lamiinae, the flat-faced long-horned beetles (the taxonomic ground beneath the Cerambycids’ feet is constantly shifting). Lamiinae, whose faces are oriented vertically and who often sport a spike on each side of their thorax, is a diverse bunch that includes some “pest” species. The BugLady thinks, having discarded a few other possible genera, that this beetle might be in the genus Astylopus, maybe Astylopus sexguttata (and she concurs with one reference that said “the average insect enthusiast faces identification challenges”). She couldn’t find any specific life history information about this beetle. 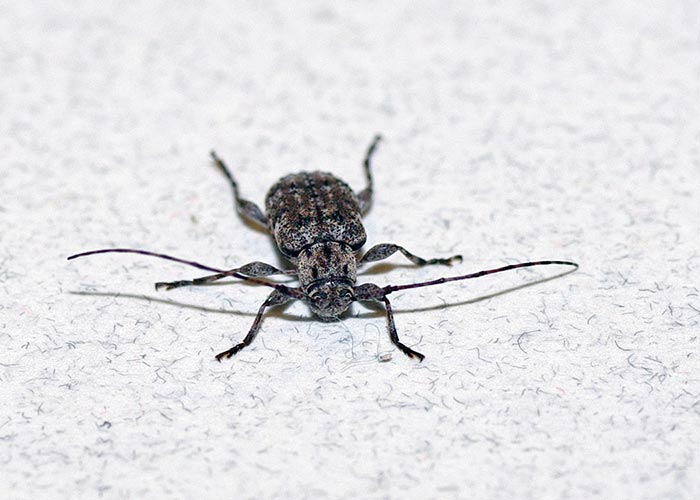 Long-horns are also famous for their biting and for their squeaking. This guy/gal fell onto the BugLady’s arm as she was searching for walnut sphinx caterpillars one night and promptly bit her. People often use the terms “bite” and “sting” interchangeably when talking about insects, but biting happens at one end, and stinging happens at the other end, notably practiced by the ant-bee-wasp bunch. She refrigerated the beetle overnight and photographed it the next day. Long-horns squeak by rubbing small ridges on the outer surface of their head against the inside surface of their thorax. While she was herding the beetle back into its jar after her stove top photo shoot, it did some squeaking. Incidentally, a long-horned beetle has been discovered in Peru that actually stings – the only beetle known to do so. Even better, it stings with its antennae!

Finally, BugFan Annie suggested a re-run of the BOTW episode on lightning beetles because of their abundance on our evening landscape recently (due, according to Cooperative Extension entomologist Phil Pelliteri, to the wet spring of 2010). And where the night sky is filled with light, the daytime is filled with the sounds of cicadas. And then there are the raspberries, which several BugFans have reported are laden with Japanese beetles. The BugLady suggests you travel to the UWM Field Station website and click on Bug of the Week. You can search the archives for Cicadas, Japanese beetles and lightning beetles.