The BugLady was walking along the trail at Forest Beach Migratory Preserve recently when she saw a flashy, orange, inch-long wasp actively hunting for something in some white ash saplings. The wasp was flying from tree to tree, searching among the leaves. It returned several times to a twig upon which sat an infant Tiger swallowtail caterpillar, and the BugLady feared that the wasp would grab the caterpillar to provision a brood cell; but it turned out that this was an Ichneumon wasp, and she had other plans for the caterpillar. 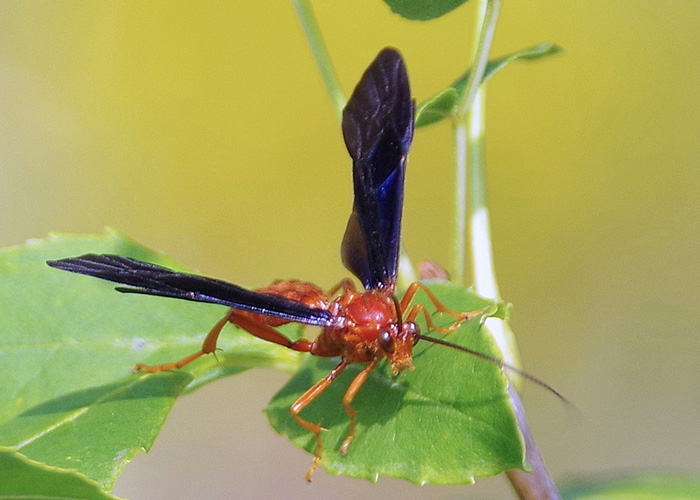 The wasp family Ichneumonidae is a huge one – at around 60,000 known species (and maybe another 40,000 undiscovered species waiting in the wings), it’s in contention with weevils and rove beetles for the title of Largest Animal Family. Some 5,000 species of Ichneumons call North America home, and about them bugguide.net says, “Ichneumonids are notoriously hard to identify: aside from the sheer number of species, there are numerous cases of distant relatives that appear almost identical. Any identification based solely on comparing images should be treated as suspect unless an expert has said there are no lookalikes for the species or group in question.” Which puts the BugLady way out on that taxonomic limb again, but she’s gotten pretty comfy there.

Ichneumon larvae typically live as parasitoids in the bodies of other invertebrates, not delivering the coup de grace until it’s time to pupate (the wasp larva successfully; the host, not). Ichneumons can be highly specific in their choice of hosts. 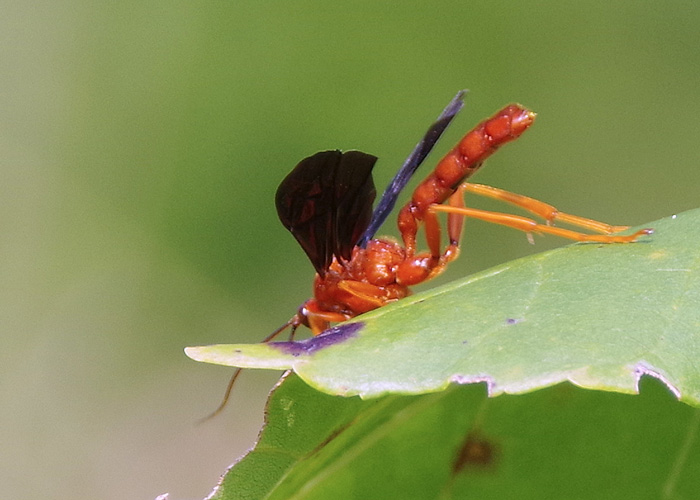 So, the orange wasp is (probably) Trogus pennator (no common name). Here’s a nice picture of one. Trogus comes from a Greek word meaning “to gnaw” and pennator from the Latin for “feather” or “wing.” And yes, there is a look-alike, an unrelated spider wasp named Tachypompilus ferrugineus, but Tachypompilus has a smooth-ish abdomen, and Trogus’s abdomen has a “beaded” look. It has been suggested that Trogus pennator mimics the spider wasp because spider wasps can sting (painfully), while the Kaufman Field Guide to Insects of North America, says of Trogus’s subfamily Ichneumoninae that “Females have venom glands and some can sting weakly.” There are a dozen species in the genus, half of them in the New World.

Credit where credit’s due – a good deal of the work that has been done on Trogus pennator has been carried out by researcher Karen Sime of Cornell University (Go, Big Red!), who theorizes that the genus originated in the Palearctic region (the northern half of the Old World) and arrived in the New World via Alaska on the heels of the spectacular Old World Swallowtail butterfly. 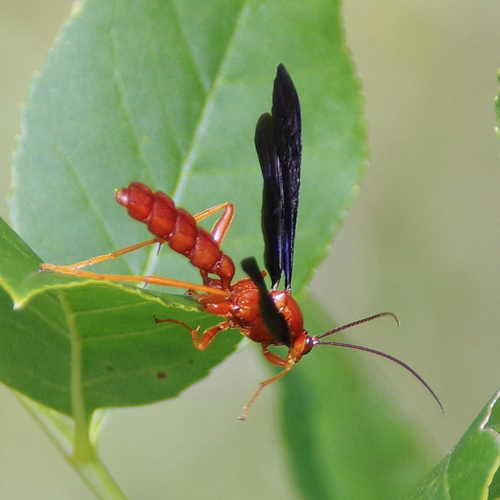 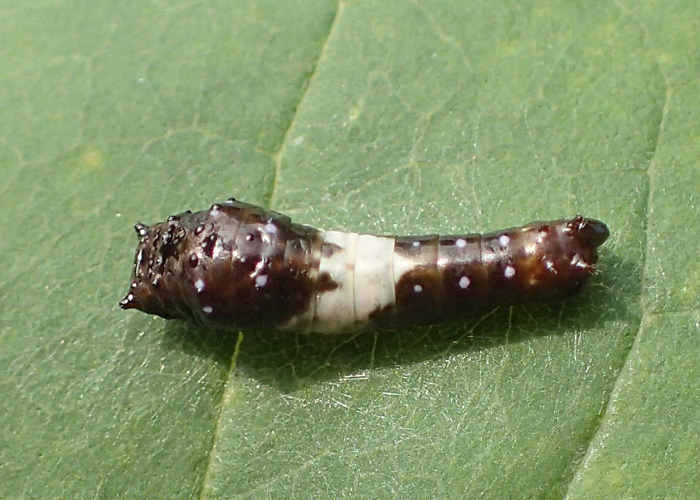 So Ms. Wasp’s search was for swallowtail caterpillars, and a lot of research centers on exactly how she locates them. It’s possible that the wasp can identify the host plants visually, and she may be able pick up on the chemical signature of undamaged leaves, but in one study, Trogus pennator wasps targeting Zebra swallowtail larvae were found to recognize the odor that a host leaf emits when it’s damaged by grazing caterpillars. Once they’ve found caterpillars on them, “naive wasps” quickly learn their host plants. After that, they don’t waste time on non-host plants, and they concentrate on host plants with damaged leaves. But – think about it – does a wasp like Trogus pennator, which has more catholic tastes, learn to ID all of the host plants of Tiger Swallowtails (Butterflies of the North Woods lists about a dozen of them) plus the food plants of Black Swallowtails (here’s one that emerged from a Black Swallowtail chrysalis), plus Zebra Swallowtails, plus….? 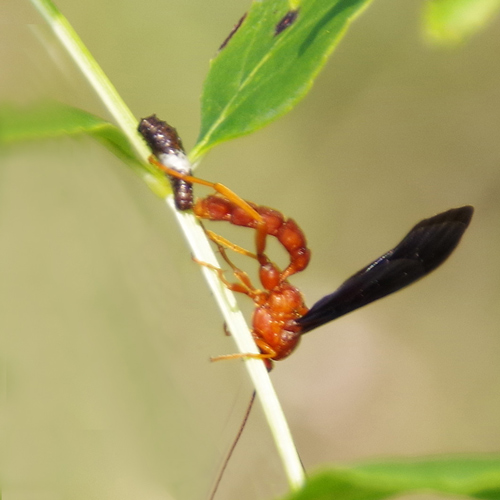 When she finds a caterpillar, Trogus pennator inserts a single egg into it (and the BugLady may have accidentally captured that moment). The BugLady found a second caterpillar, in the open on the leaf of a nearby ash – it had a small, black “button” at the end of its abdomen, and the BugLady is wondering about that. The caterpillar goes on its way, feeding and growing, but it’s a goner – only the wasp will exit the chrysalis. If the swallowtail caterpillar is from the second brood, destined to overwinter as a chrysalis, the wasp larva goes into a state of diapause (suspended animation) along with it and emerges in spring. 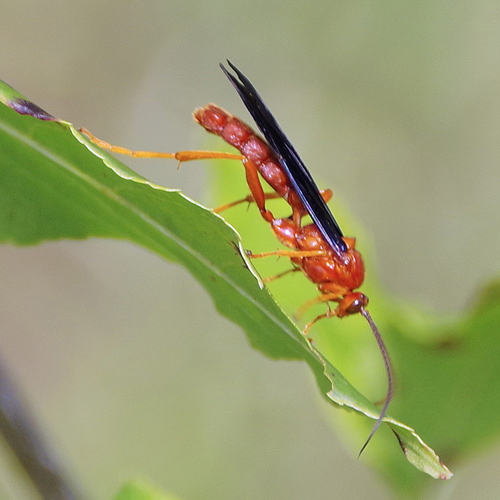 Some swallowtails try to adapt – butterflies may lay eggs lower on host plants than the wasps typically hunt, and caterpillars may feed at night.

[Editorial Comment: She’s a beautiful wasp, and her behaviors are fascinating, and yes, she has to make a living, but Tiger Swallowtails? Tiger Swallowtails are the BugLady’s favorite bug, and she’s worried about them. They have two broods a year – the small spring flight is made up of survivors of the cohort of fall caterpillars that endured the rigors of winter as a chrysalis. Their offspring pupate in the mild days of June and July and emerge as a mid-to-late summer brood that needs to be large, because of the hazards their offspring will face in the winter. The spring numbers were respectable this year, but the wildflowers are waning, and the BugLady just hasn’t seen many second brood Tiger Swallowtails. Some other phenological benchmarks seem a bit off kilter this summer, so maybe there’s still time.]