This BOTW started out to be about one thing—preconceived notions, wherein the BugLady thinks she knows what insect she’s approaching, only it isn’t—and it turned out to be about something way more exciting—thick-headed flies and “adaptive manipulation.” Eventually. Put your feet up—this tale takes some telling.

When wild geraniums are in bloom, they’re visited by early pollinators like mining bees, and the BugLady takes lots of shots of the pollen-covered bees cozying up to wild geranium stamens. (OK, the BugLady can’t resist sharing this surreal picture of pollen. When the BugLady spotted yet another occupied flower, she almost didn’t walk over to check it. Surprise! This was not just another mining bee, it was a Thick-headed fly in the genus Myopa. Imagine seeing this beauty on the other side of your lens! 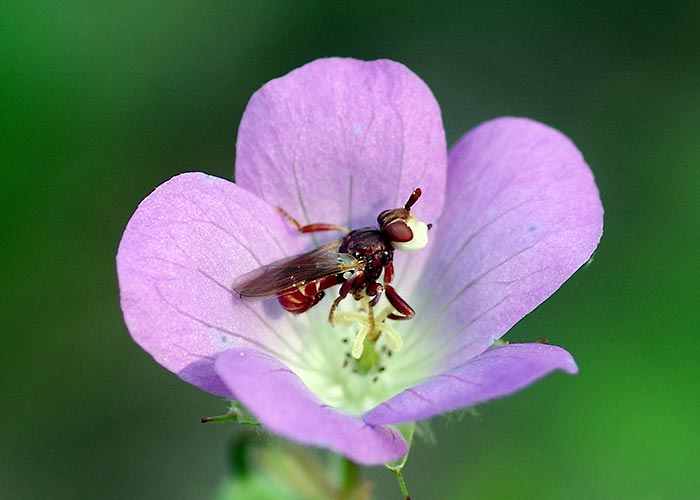 Thick-headed flies were mentioned briefly in a “Bugs without Bios” episode five years ago. They are in the small family Conopidae (which means cone-faced) and they come in a variety of forms:

The BugLady was amazed at the number of photo sites devoted to these flies—a whole bunch of people are finding, admiring, and photographing them.

This particular thick-headed fly looks like it’s part of what’s called the Myopa curticornis species complex—that is, as bugguide.net tells us, “a group of 4 species (M. curticornis, M. clausa, M. perplexa and M. rubida) separated by characters that can grade into one another, sometimes making a species ID difficult or unfeasible.” Myopa clausa occurs from Coast to Coast, but it’s the only one of the four species that occurs east of the Rockies.

Adults nectar on flowers, but Ms. Myopa has an ulterior motive for being there—she’s looking for hosts for her offspring. Thick-headed fly larvae are parasitoids of ants, bees, wasps, grasshoppers, crickets, and a few other groups. Myopa targets honey bees, sweat bees, and Anthophora bees, and it has a unique egg delivery system. Think “heat-seeking missile,” but without the heat. When she spies a potential host, she flies up, intercepts the incoming bee in flight, grabs it, and inserts a single egg between two of its abdominal segments (alternatively, the two fall to the ground and she does the deed there). According to The Audubon Society Field Guide to North American Insects and Spiders, “Victims of thick-headed flies offer little resistance to being caught. They are held captive during the short flight while the egg is being attached.”

There’s an old saying, “A good parasite doesn’t kill its host.” A good parasitoid, however, does. Slowly. Keeping it alive by feeding first on the non-essential tissues, and moving on to the vital organs as the interloper approaches pupation and doesn’t need a live host anymore. The Myopa fly overwinters as a pupa in its host’s body.

Fast forward two months, and the BugLady sighted what she thought was a solitary wasp called a potter wasp, but which turned out to be another thick-headed fly, Physocephala tibialis (probably). bugguide.net calls Physocephala the most commonly seen genus of thick-headed flies. P. tibialis occurs east of a line from Wisconsin to Texas. 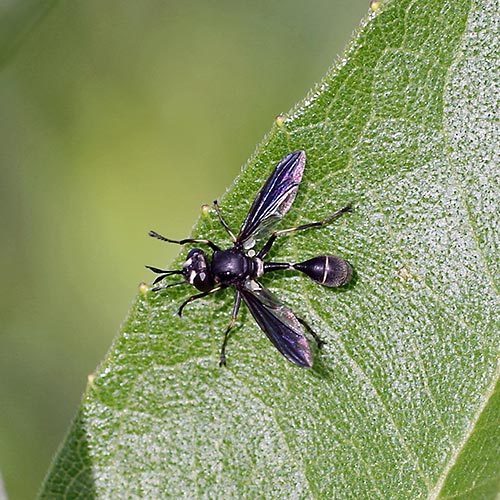 Physocephala tibialis targets the two-spotted bumblebee (Bombus bimaculatus, brown-belted bumblebee (B. grisecollis) and common Eastern bumblebee (B. impatiens) and its modus operandi is similar to that of other family members. Typically, it’s the worker bees that get infested—the queens are active earlier and are tucked away in the nest by the time Physocephala emerges (other species of Physocephala, though, may occupy the queens of late emerging bumblebee species). There have been a number of studies that show that the life spans of parasitized bumblebees aren’t significantly shortened, though as the parasitoid grows, the bee can’t carry home as much nectar. Bumblebees will chill, literally, to put off the inevitable, seeking cooler spots, even sleeping outside at night to slow the growth within them. If lots of the workers in a nest are infested, future queens may be smaller in size and may not have enough energy to get through the winter.

The fly larvae pupate in their host’s body—a simple, declarative sentence with some interesting layers. First of all, although most fly larvae (maggots) have mouthparts that allow them to chew, their elders do not; adults mainly suck/sponge up soft-ish liquids, sometimes using their saliva to enhance the softening.

Question: Trapped within the dried husk of its former host and absent a Swiss army knife (or teeth) how does a newly emerged thick-headed fly effect its escape?

Answer: It uses its ptilinum (pronounced ptilinum). In some (but not all) groups of flies, the emerging fly has an eversible pouch on the top of its head that it can inflate like a tiny balloon in order to push its way out of a tight spot. Small, tactile hairs on the balloon’s surface help to guide the fly. Conopid flies have a thicker ptilinium than most other flies, and both ptilinum and mouthparts are covered with hard scales, presumably to give an extra assist in emerging from an underground host/pupal case (Physocephala uses its legs and mouthparts to pry its way out once an exit is created). After its “single use,” the ptilinum is reabsorbed. (Great photos at: Balloon-faced Flies, Part 3).

But wait—“emerging from an underground host/pupal case?” What are these bee parasitoids doing underground in the first place? Adaptive manipulation, that’s what. The BugLady has written about adaptive manipulation before, in the person of insects who are steered by a parasite/virus/bacteria go against their normal behavior and do something that aids their inhabitants’ reproductive strategies—climb to the top of a plant before death, jump in the pond, stand out in the open and be picked off by the next-host, etc.

Conopid flies, it seems, program their sun-loving hosts to dig into the soil during their last moments and die there (it’s called, aptly, “grave-digging behavior”). The bee is past help, but the interment greatly improves the fly’s chances of surviving the winter and avoiding predators.

When infestation rates among Physocephala tibialis’ three potential hosts are compared, the self-burial rates of the Brown-belted bumblebee were about one-quarter those of the other two (which are more closely related to each other). While it is true that some hosts can resist/overcome potential hostile takeovers, it seems that the brown-belted bumblebee may simply be “less suggestable” than the other two. So, if it can’t reliably influence the bee, the fly may be less inclined to trust it with its offspring.

(Grisly enough for you, BugFan L?)