Bugs are making more noise than birds are these days, except for the odd Sandhill Crane that throws back its head and bugles to the sky. The Sandhill’s reproductive dance is finished for the year, but the tree cricket’s is in full swing.

Tree crickets have company in their late summer chorus; sound emanates from grasslands, shrubs and trees by day, at night, and in-between. Meadow katydids contribute short, soft clicks and whirs; field crickets call out in loud chirps; coneheaded katydids buzz; and bush katydids send out sharp “Tsips.” Tree crickets are the most melodic; Nathaniel Hawthorne once said about tree cricket trills that “If moonlight could be heard, it would sound like that.” 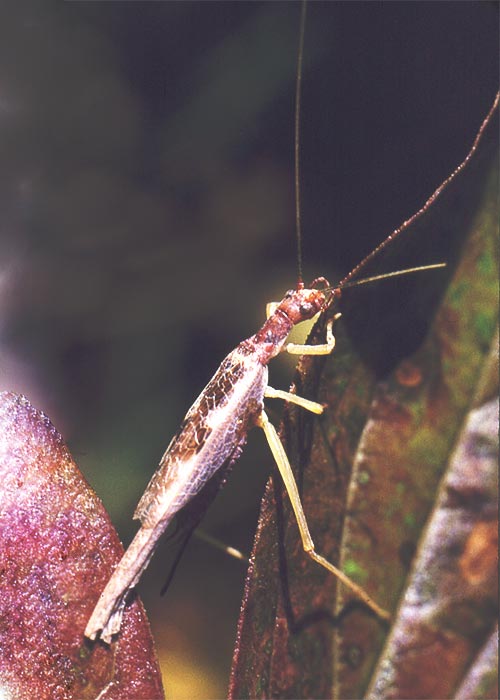 They’re called tree crickets because many species hang out in trees (where they’re pretty tough to spot, so the BugLady is delighted that a few will sit on flowers). They are in the order Orthoptera (crickets, katydids, grasshoppers, etc.) and in the “true cricket” family Gyrllidae. It’s hard to relate these slim, delicate, lime-green creatures to the sturdy field crickets, and some entomologists think they merit their own family. Our local TCs are in the genus Oecanthus (the “O” is silent and the “E” is long), except for the Two-spotted TC, which used to be. 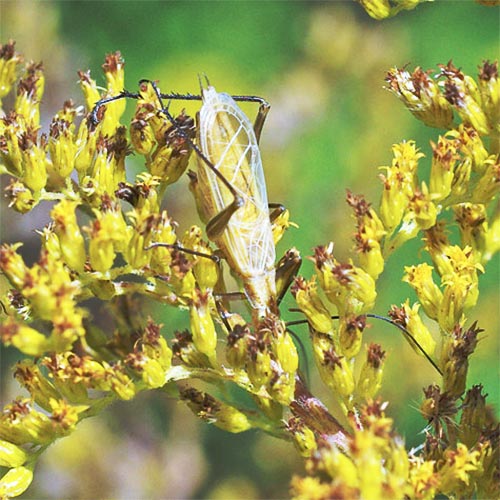 There are 14 or so species of Oecanthus in North America north of the Rio Grande. TC experts divide them into four or five groups, depending on color, shape, and life style. Spots at base of antennae help to identify TCs. As always, anyone who wants to correct any of the BugLady’s IDs will not hurt her feelings. 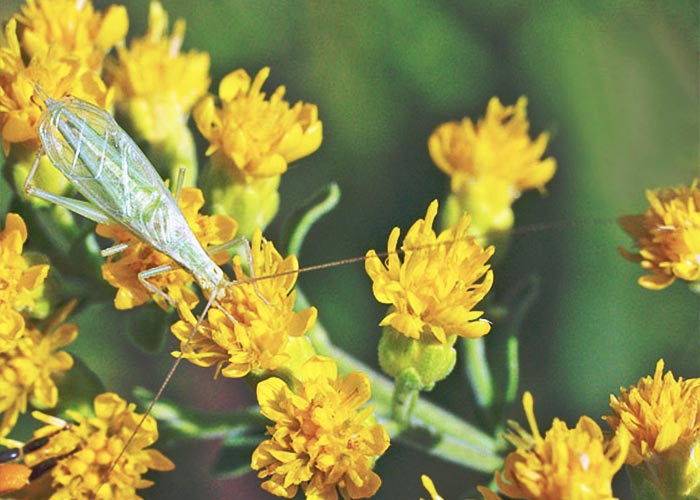 Tree crickets have two sets of wings; a female’s forewings hug her body, and males’ forewings are flat and wide. Males produce sound by rubbing together rough areas (called the “rasp” and “file”) at the base of the forewings, a method of sound production called stridulation (from the Latin stridere—“to make a harsh noise”). In The Songs of Insects (a dandy book that comes with a CD of sounds), Elliot and Hershberger report that “Interestingly, the males of a number of species often sing from the underside of a curled leaf, from the edge of a leaf, or from a hole in a leaf, in order to reduce acoustic interference and thereby increase the intensity of their songs.” They go on to say that “During sound production, crickets and katydids elevate their wings and then move them back and forth rapidly. The wings vibrate to produce the song. Among the field and ground crickets, the wings are held up at a low angle from the body and spread slightly during song, while in the tree crickets, they are held straight up at a right angle to the body.” 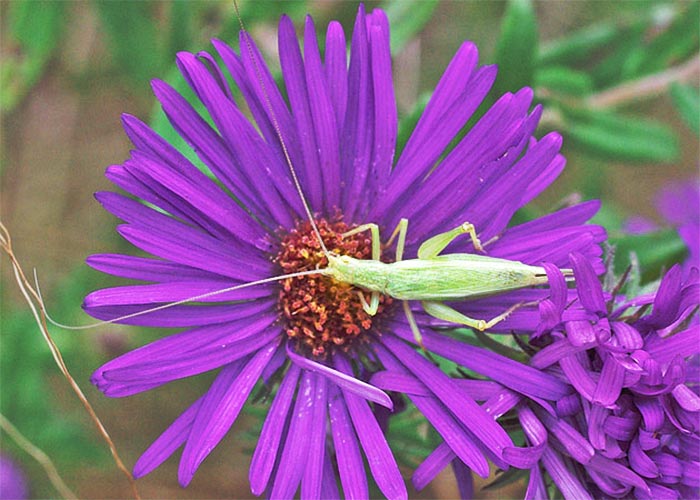 Each species of TC has its signature calls, and the tempo of the call is affected by the temperature of the air around it. Insects are cold-blooded, and they slow down and speed up as the temperature falls and rises. In 1897, Amos Dolbear worked out a formula (Dolbear’s Law) to calculate the temperature near a calling snowy tree cricket (O. fultoni), and the formula also works for the ground-dwelling Field Crickets, Gryllus sp.. Count the number of chirps in one minute, subtract 40 from that number, and divide the answer by four. Then add 50 to get the temperature in the microclimate where the cricket is sitting, not out on the path where you are. A more simple process is to count the chirps for 15 seconds and add 40 to get the temperature in Fahrenheit. For Centigrade, BugFans are on their own; the nuns in the BugLady’s grade school told her in the 1950’s that we were learning the metric system (or not) because the U.S. was going to change any day now. 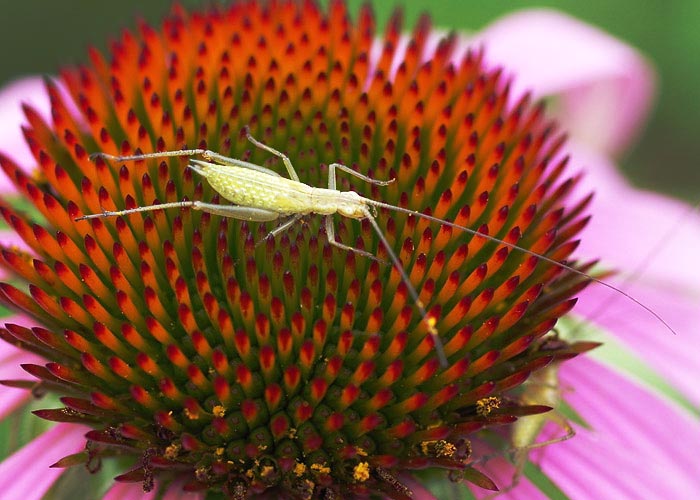 Female TCs don’t call, but they do listen, and because the males call at different frequencies depending on how warm or cold they are, the females’ hearing organs (tympana/tympanums) need to “hear” a wider range of frequencies than those of many other insects. Female TCs prefer males who sing bass (a lower call indicates a larger caller, one that probably has more sperm). 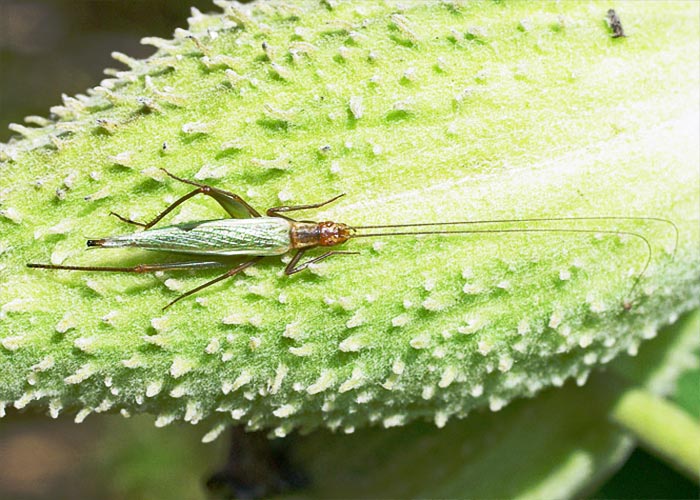 TCs are famous for their courtship ruckus, but what happens after the song ends is noteworthy, too. The singing male attracts the gal of his dreams, and courtship ensues, a dance that lasts for as long as a half hour and is accompanied by much antenna-waving (a TC’s antennae record both touch and smell). The position of his raised-wings reveals to her a “honey pot”—a small trough located between his wings. In it, the metanotal gland produces a fluid for the female to feed on, and when she consumes it, she both increases the odds of reproducing successfully and she places herself in a position that allows the male to deliver a spermatophore into her operative opening. He can resume the dance with a new female after he takes a short time-out to produce another spermatophore. 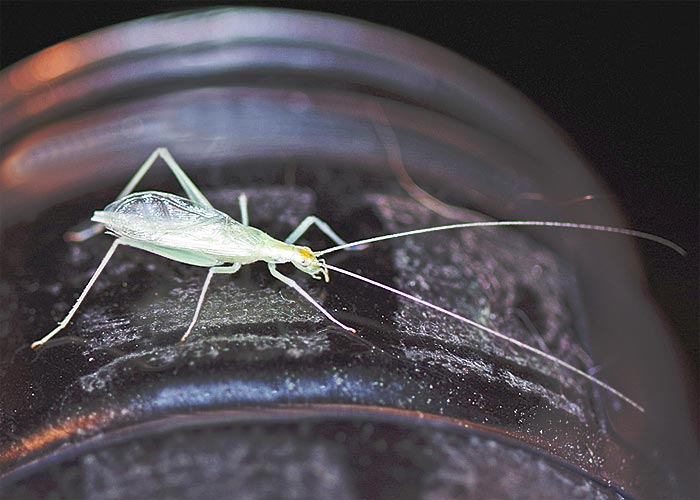 Females lay eggs in late summer or in fall in whatever substrate they exist on—they drill into the bark of woody twigs or into herbaceous plants and, depending on the species, deposit one or more eggs in the bark or pith. After ovipositing, they back-fill the hole with mucilage and then caulk it with frass (bug poop) or chewed bark. The young hatch in the spring (here’s a brand new Black-horned TC nymph. TCs practice simple/incomplete metamorphosis, resembling adults (somewhat) when they hatch and adding parts as they grow and molt (five times). Contrary to popular belief, many crickets, katydids, etc. happily enjoy an omnivorous lifestyle, consuming aphids and other small insects as well as plant material. TC nymphs that get stuck while emerging may be eaten by their brethren. 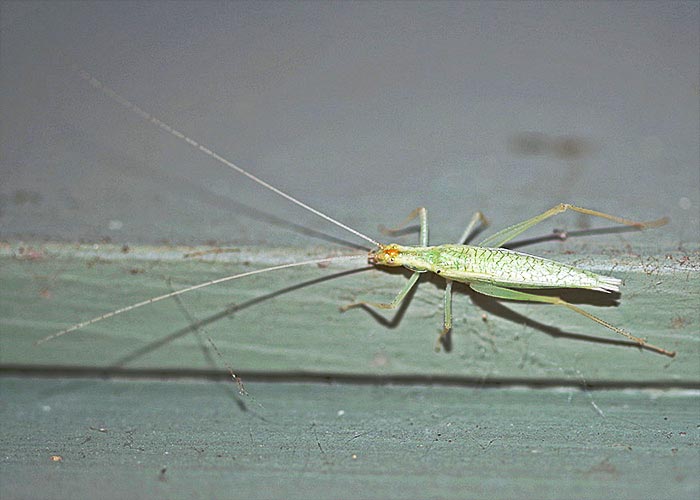 For much more information, Bugguide.net notes that a great source for “everything you ever wanted to know about tree crickets” is an article written in May 1915 by Bentley B. Fulton in a Technical Bulletin for the New York Agricultural Experiment Station, “The Tree Crickets of New York: Life History and Bionomics.” 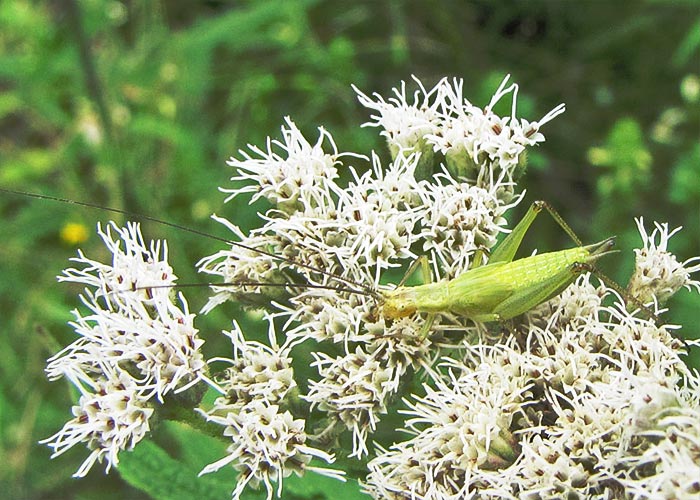 Although the BugLady has a “tin ear” and can rarely tell one call from another, she mightily enjoys the chorus. She hopes that BugFans will visit the following sites and ferret out which species are singing in their back yards:

For a real treat, go to Oecanthinae- Tree Crickets, turn up the volume on your speakers, and scroll down slowly. The rest of the site is nice, too.

For the ultimate cricket and katydid experience, try the University of Florida’s recordings of crickets and katydids north of Mexico. Fair warning—trying to hear some of the katydids may send BugFans to the nearest Audiologist.