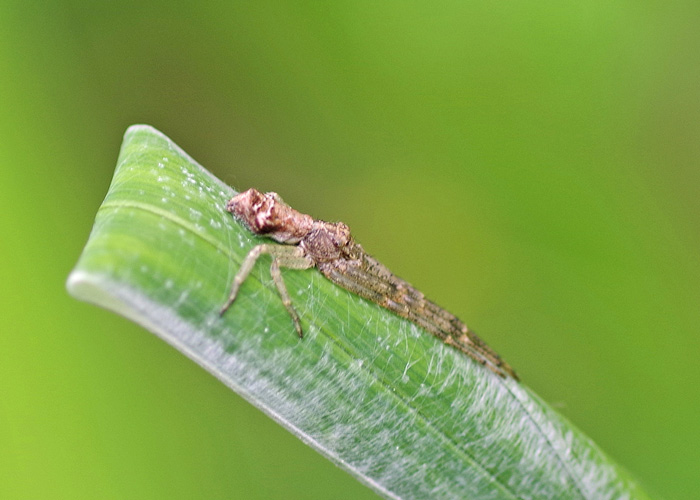 The BugLady was checking around the edge of a gravel parking lot near the Ozaukee Washington Land Trust’s Lake Twelve property (because there are bugs there, too) when she found this beauty (it took two trips and two different cameras to get a few almost-in-focus shots – sometimes it’s like that).

She had two immediate reactions: 1) what is it? And 2) it looks like an octopus clinging to a reef!

It’s a crab spider in the tree crab spider genus Tmarus, probably Tmarus angulatus (thanks, as always, to BugFan Mike). Mike says that there are a few documented records of this species in Wisconsin, but they are probably more common, it’s just that we don’t typically hunt for spiders in trees. And, of course, they seem to have the “camouflage” thing figured out. 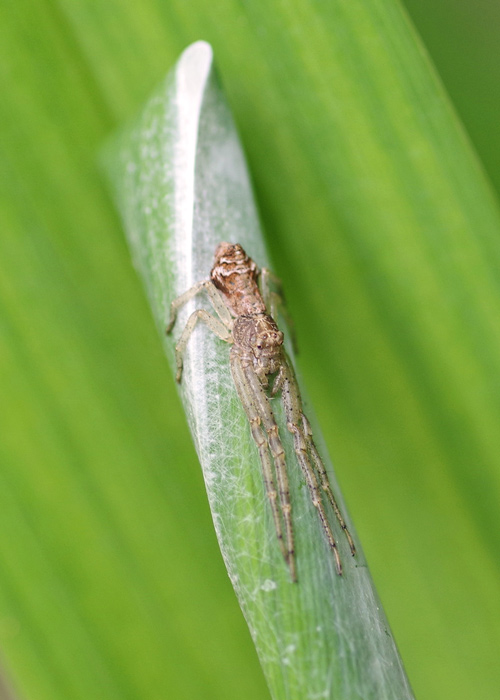 Crab spiders (family Thomisidae), best known for the species that ambush insects on flower tops, are long-time favorites of the BugLady. They get their name from their tendency to hold those four, extra-long front legs in a crab-like pose and for their tendency to move sideways. Crab spiders don’t spin trap webs to catch their prey, they ambush it on the hoof. They paralyze their prey and then introduce (bugguide.net says “vomit”) digestive enzymes into it, wait for its innards to soften, suck out the tenderized tissue, and throw away the empty.

They do spin silk, protecting themselves from a fall by playing out a drop line as they hunt, and this Tmarus spider was guarding her eggs in a chamber she created by bending and webbing together a slender day lily leaf. She will stay nearby for about a month to protect her eggs from predators.

About the genus Tmarus the BugLady could find very little. The spiders appear regularly on state biodiversity lists, and there are a bunch of scholarly articles about new species being discovered in different countries around the world (one article from Sri Lanka was titled “Twigs that are not Twigs”). The BugLady was gratified to find that the spectacular Tmarus marmoreus spider in Australia is, indeed, nicknamed the Octopus spider. It hunts by dangling from a line of silk with its front legs poised and ready.

Their knobby bodies are usually well-camouflaged on bark and other vegetation, where they look like buds or broken twigs. The Field Guide to the Spiders of California and the Pacific Coast States tells us that with “forelegs along either side of a stem, they wait for an insect to wander between them.” According to the Kansas School Emporium’s Checklist of Kansas Crab Spiders, Tmarus spiders have been observed eating ants, which most spiders avoid. 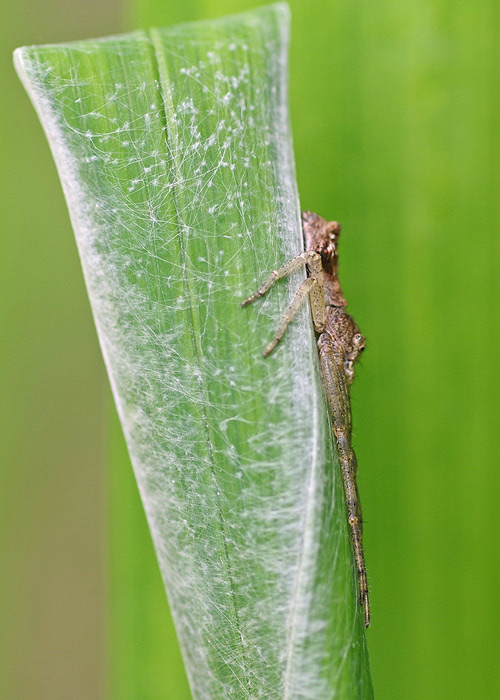 Tmarus angulatus, sometimes called the Tuberculated crab spider, is small spider with a body about a half-inch long (females are larger than males) that is found across the US and southern Canada. Some are pale and some were dark, and the BugLady saw a picture of a gravid female with a dark cephalothorax (front end) and a pale abdomen, with a caption that said that she looked like a spittlebug nest. Well, maybe. Here’s a little gallery of shots of Tmarus angulatus :

Tmarus angulatus was described and named in 1837 by Baron Charles Athanase Walckenaer (1771 – 1852), who is described as a French civil servant and scientist. In fact, he squeezed the pursuits of several lifetimes into his 80 years. He was a geographer who was named Conservator for the Department of Maps at the Royal Library in Paris, was Secretary for life of the Academie des Inscriptions et Belles Lettres (where he introduced the French to the English genre of the biography), was a co-founder of the Societe entomologique de France, member of a group of early anthropologists called the Societe des observateurs de l’homme, was mayor of a section of Paris, found a map of the Americas drawn by Columbus contemporary Juan de la Cosa (the earliest known map of the new World), and was an arachnologist and entomologist (author of Histoire naturelle des insects).